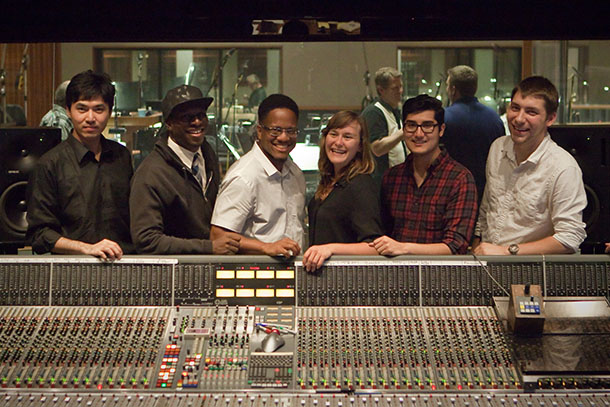 Members of the class of 2017 at The Bridge recording studio in LA, where they each recorded an original thesis score with a full orchestra.

Music Composition for the Screen MFA alumni are scoring big gigs in Hollywood.

Established alumni are the backbone of the program's success. Columbia alumni are scoring gigs in composition in Hollywood, and often connect students with opportunities in the field.

Nobody builds their career alone. You’ll need a network of people who have been there before to advise you and give you honest feedback. Columbia Music Composition for the Screen MFA alumni are just such a network. Many grads are now active professionals in the music for media industry in Hollywood and around the world. They are gaining success in all segments of the industry, from game music to animated features to TV to feature films, and support one another through advice, referrals, and inside-information.

Tyler Durham MFA ’17 was hired as a full-time assistant to composer James Newton Howard (Red Sparrow, The Hunger Games.) Before that he was accepted into the 2017 American Society of Composers, Authors, and Publishers (ASCAP) Workshop, and subsequently awarded the ASCAP Foundation’s David Rose award.

Batu Sener MFA ’14 is assistant to Oscar-nominated composer John Powell, and has “additional music by” credit on the upcoming animated feature Ferdinand, in theaters December 2018.

Jordan Lewis MFA ’14 scored the hip-hop documentary G-Funk that premiered at South by Southwest 2017. As part of his work with seven-time ASCAP-Award-winning TV composer Didier Lean Rachou, he also has “additional music by” credits on several TV shows, including The Greeks.

Jesi Nelson MFA ’15 is assistant to TV composer Michael Kramer and has “additional music by” credit on Lego Star Wars: The Freemaker Adventures, which received a 2017 Daytime Emmy nomination for best score.

Logan Stahley MFA ’15 has “additional music by” credit on the TV series Lawless Oceans, and music editor credit on the film City of Ghosts, as part of his work as assistant to composer H. Scott Salinas. He also wrote arrangements for The Angry Birds Movie.

Jared Martin MFA ’15 was music engineer on the ABC TV series Mistresses, and worked on the ABC smash hit Grey’s Anatomy as part of his assistant duties with composer Danny Lux.

Connor Cook MFA ’16 scored the feature documentary A Passage After the Opaque by Oliver Ousterhout. She also has music department credits on the feature films Take Me, Princess Cyd, And Then I Go, Valley of the Moon, and Six Balloons as part of her work as assistant to composer Heather McIntosh. She also works as assistant to TV composer David Schwartz (NBC’s The Good Place).

Zachary Gordon MFA ’16 works as assistant with composer team The Transcenders on the TV series Madam Secretary and Black-ish.

Alexa Borden MFA ’16 is writing the score for the feature film Elevate.

Emer Kinsella MFA ’16 did additional arrangements on ten episodes of the Netflix TV series Sense8 as part of her work with Johnny Klimek.

Learn about the Music Composition for the Screen MFA