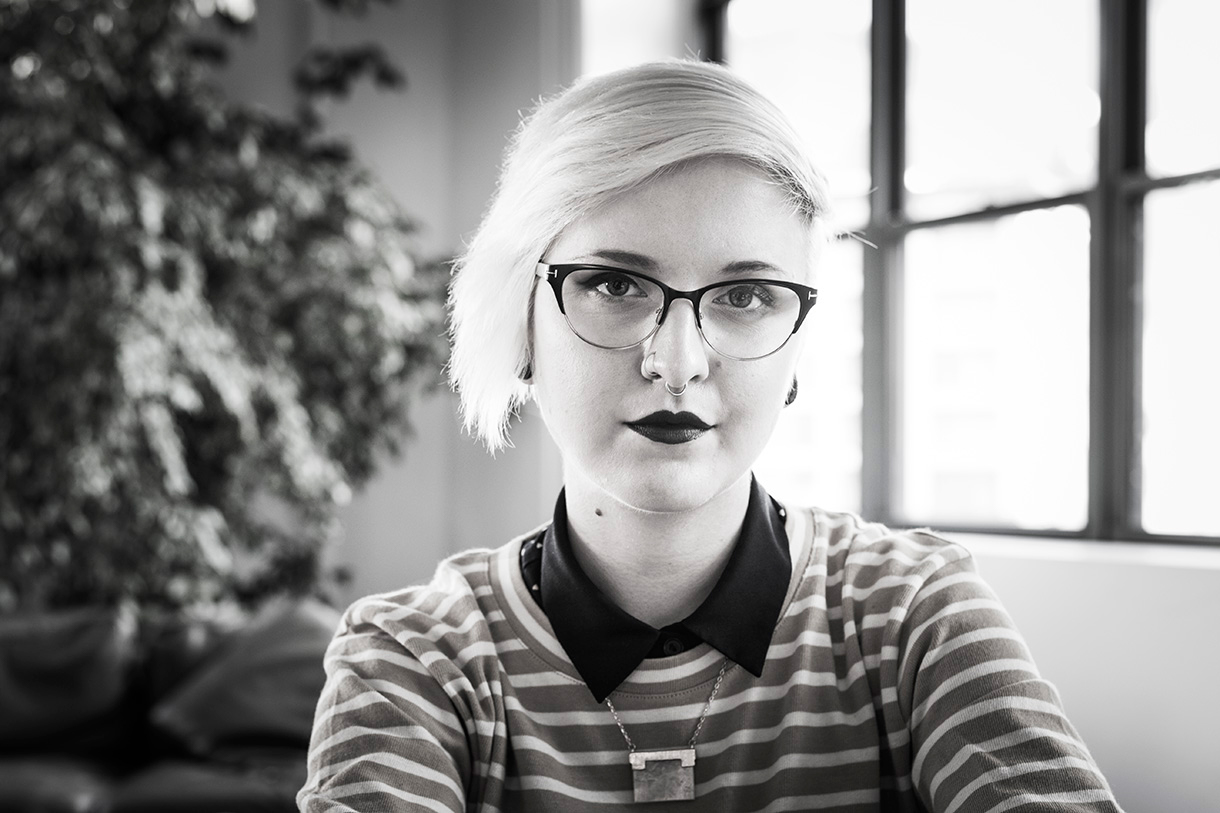 Growing up as a “weird art student” in the Midwest town of Canton, Ohio, Heidi Unkefer ’13 learned to use her artwork to escape the mundane.

“A lot of my illustration is this fantastical world of bright colors and creatures and drippy, gooey things, and I think that was my outlet to wanting bigger things,” she says. “Having that sort of [small town] restriction in life led me to create this alternate universe for myself.”

Since her time at Columbia College Chicago, Unkefer’s alternate art universe has led to bigger and better things. She jump-started her illustration and graphic design career at Columbia, which led to an opportunity creating tongue-in-cheek graphics for parody publication The Onion. Today, Unkefer works as a graphic designer for HBO’s satirical news show Last Week Tonight with John Oliver, creating photo mashups that appear as over-the-shoulder graphics displayed behind the show’s outspoken British host. 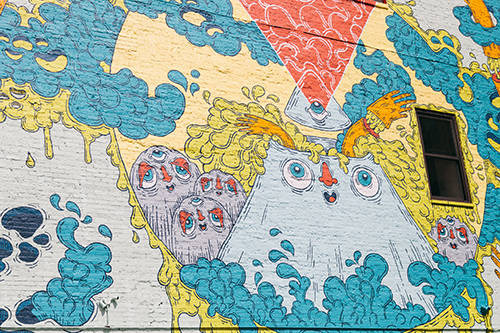 In 2015, Unkefer won the Wabash Arts Corridor alumni competition, for which she created her largest mural to date: Slime Mountain. The mural is located on the south-facing wall of 623 S. Wabash Ave. on Columbia’s campus. Photo Credit: Camila Cediel ’16

When she was looking for colleges, Unkefer was drawn to big cities. At the same time, she appreciated Chicago’s Midwestern familiarity. Columbia attracted her with a wide range of artmaking options and interdisciplinary opportunities, which she knew would allow her to explore and evolve as an illustrator. In school, she dabbled in different mediums like printmaking and screen printing. She also discovered a passion for collaborating with writers through class assignments and the student newspaper, The Columbia Chronicle—skills that came in handy when she began interning at The Onion in 2013.

“I love the idea of taking [writers’] ideas and then warping them a little bit into my own vision that comes out on paper or canvas or wherever,” she says. “I think it’s really amazing whenever two creatives who are from different worlds come together and they create this one thing.”

At Columbia, Unkefer also began developing different illustration styles. “At times I can be this really cartoonish, crazy illustrator just making this alternate reality of characters and things that don’t really exist,” she says. “And then there are times when I think my aesthetic is a little bit more laid back.” She learned to use color and composition to convey a mood, using her artwork to illuminate the meaning of a collaborative piece before the viewer has read a single word. 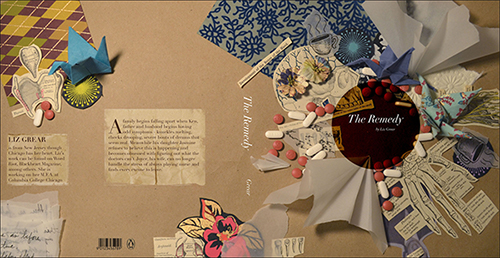 As a student, Unkefer collaborated with Liz Grear ’11, MFA ’15 on this mock-up for The Remedy, a book Grear created as part of her Creative Writing classes.

She began working as a graphics editor for The Onion and its sister site, ClickHole, in 2014. At the legendary parody website, she worked closely with a team of designers to create artwork to accompany articles. For instance, for the article “Obama Increases Sense of Urgency by Riding Last White Rhino on Earth Through Climate Talk,” she used photo manipulation to show the president solemnly riding a rhinoceros through a crowded auditorium.

In 2015, Unkefer won the Wabash Arts Corridor alumni competition and created her largest mural to date, Slime Mountain, located at 623 S. Wabash Ave. Her depiction of a smiling anthropomorphic mountain cheerfully spewing green goo was inspired by Chicago’s frigid winters. “Whenever it’s snowy or raining, people can look up and realize it’s still bright and beautiful in this world,” says Unkefer. “I wanted it to sort of take somebody into this alternate reality, especially when things get a little gray there.”

In 2016, Unkefer moved to New York City and began working as a graphic designer for Last Week Tonight with John Oliver, where she creates on-air graphics using illustrations and photo manipulation. Fitting with the theme of satire, her graphics usually include notable political and societal figures in compromising, hilarious or critical situations. Unkefer admits that working with tight television deadlines has helped her focus as an artist. “I’ve been able to put my indecision aside to make these quick decisions to be more confident in what I’m doing,” she says. Recently, she also began freelance designing for nightly NBC talk show Late Night with Seth Meyers.

New Unkefer designs are showing up on campus in an unexpected place: In 2016, she designed a set of lapel pins for Columbia Admissions. The nine pins feature images like a typewriter, a dress form, a slice of deep-dish pizza and even an homage to Unkefer’s Slime Mountain WAC mural (quickly becoming a campus icon). Now, visiting students can take home a souvenir to remind them of the colorful spirit of Columbia, the city and the enterprising alumni artist who created them. You can see more of Unkefer’s illustrations and designs at heidiunkefer.com. 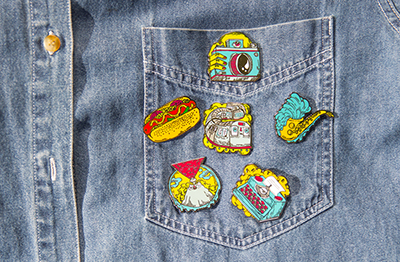 In 2016, Unkefer designed a set of lapel pins for Admissions. The nine pins reflect Unkefer’s signature, cartoony style. “I can be a very crazy, bright, saturated cartoony, highly stylized, drippy, gooey-making artist,” says Unkefer. The illustrations include art objects such as a typewriter, saxophone and camera, as well as Chicago homages like a deep-dish pizza and a smiling Willis Tower.