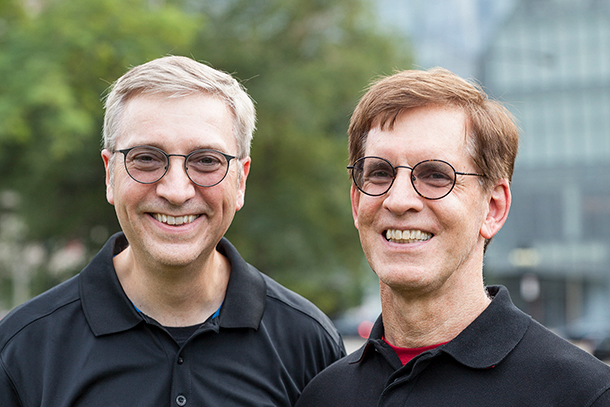 “Her voice should be out there. We shouldn't lose it.”

One of Scot O’Hara’s MFA ’95 most vivid memories of his friend Judith Handschuh MFA ’96 is a classic Chicago tale. On a frigid Chicago winter night, O’Hara and Handschuh made the trek from dinner to their creative writing class. The two of them were forced to duck in and out of buildings to escape the subzero temperatures and warm up before they could continue on their way. O’Hara and Handschuh met during Columbia’s Master of Fine Arts Fiction Writing program and immediately developed a friendship based on their nontraditional status.

“We were the two old folks in the class, and so we kind of connected because of that,” remembers O’Hara. After graduating, they—along with O’Hara’s husband, Dale Boyer—developed a Chicago writers’ group with friends.

In 2014, Handschuh died unexpectedly after post-surgery complications. After hearing of her death, O’Hara and Boyer considered what they could do in her honor. O’Hara recalls asking, “What can we do to remember her, and for her daughters?”

“We were tossing around all these different ideas and finally Scot just said, ‘Well, why don’t we just publish her book?’” Boyer says.

In May 2016, O’Hara and Boyer started their own small press, OhBoy Books, LLC (a combination of O’Hara and Boyer), under which they published Boyer’s debut novel, The Dandelion Cloud. They contacted Handschuh’s daughters with their idea about publishing her book. “Her voice should be out there. We shouldn’t lose it,” says O’Hara. Her daughters were thrilled, and after a few minor revisions and proofreading, OhBoy Books published Handschuh’s novel, No Justice!, in April 2016. A legal thriller, the novel is the culmination of Handschuh’s Columbia thesis.

To promote the publication, O’Hara and Boyer held a book launch at Columbia with the Creative Writing Department. The event included a reading by her daughters.

O’Hara and Boyer extended their generosity to Columbia recently: They made a planned gift of their estate. The two will provide the college with The Scot T. O’Hara and Dale W. Boyer Rainbow Creative Expression Scholarship for a Columbia student whose work focuses on LGBTQ issues and themes, and also The OhBoy Creative Expression Award for a working artist in any discipline whose work focuses on LGBTQ issues and themes. O’Hara and Boyer have consistently donated to Columbia’s Creative Writing and Dance departments, and their planned estate gifts are a way of ensuring that the charitable ideals they believe in will continue.

Both Boyer and Handschuh’s novels are available for purchase online and O’Hara’s debut novel, Tarentella, was released in November 2016 by OhBoy Books, LLC.