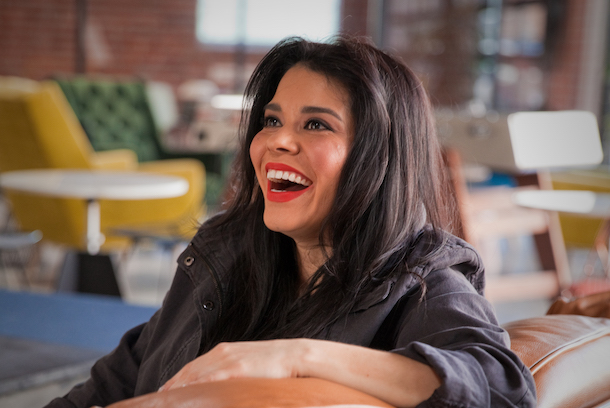 “It’s very exciting to be able to find talent not just domestically, but internationally. That’s how we have to think—globally.”
—Gina Reyes

Gina Reyes ’05 takes the lead on diversity in Hollywood.

Media executive Gina Reyes ’05 just returned from attending the Berlin Film Festival for the first time. After an 11-hour flight and a layover in Istanbul, she was immediately thrust into the busy festival, with a packed schedule of films and appointments with directors. “I was so jetlagged,” she says. But she never for a moment forgot that she’s living her dream of finding and promoting new talent. “I was really tired, but so happy that I was there. That this is my job! I’ll sleep when I get back to LA,” says Reyes.

After 13 years in Hollywood, she isn’t slowing down. But for her, a packed schedule isn’t just about getting ahead—it’s about lifting others up.

As the new vice president of scripted development for film and television at Mitú, an English-language digital platform, Chicago native Reyes develops scripted shows for the young American Latinx audience. She recently served as the director of content development at Univision’s Story House Entertainment. (The second season of Story House’s latest show, El Chapo, will premiere on Netflix in September.)

“It’s very exciting to be able to find talent not just domestically, but internationally. That’s how we have to think—globally,” she says. Development is the first, and sometimes the most challenging, phase of film production. It can include everything from acquiring stories, pitching concepts, hiring screenwriters, and revising scripts to securing talent, raising funds, and inking contracts.

Reyes’ non-stop hustle began at Columbia College Chicago. As a Broadcast Television Journalism student, she worked full time, took night classes, and interned at the local NBC affiliate, where she fell in love with producing. She left Chicago for Columbia’s Semester in LA program, and has been in California since 2005.

To break into the field, her Semester in LA teacher suggested she apply at a talent agency. “It set me straight on my path,” she says. She landed at International Creative Management (ICM) as a motion picture production assistant. “It was like a master’s degree in Hollywood,” she says.

“It’s a very tough environment. You’re on call all day, every day. But I got to know the business from the inside, and how everything’s connected.”

She was at ICM for a year when she saw a Variety announcement about a deal between Salma Hayek’s newly formed production company and MGM studios. Thanks to her growing network of colleagues, she got an interview. She worked for Hayek for four years, including two as her personal assistant. Then (after a stint traveling across South America with Jennifer Lopez for a reality show), she came into her own, through a series of junior executive positions at 20th Century Fox. She started in film production and quickly transitioned to television, where she recruited cohort-based classes of emerging talent from underrepresented groups, including women and people of color. She placed writers on shows like Empire, Rosewood, and Pitch. She also helped dozens of burgeoning directors transition from the festival circuit to episodic TV directing on shows like Starz’ Power and Showtime’s Snowfall.

Paying it forward is a priority for Reyes. She’s involved in a number of organizations that work to pave the way for those coming up behind her. She sits on the board of directors for Young Storytellers, which is “dear to my heart,” she says. “We mentor fifth graders and help them write five-page scripts. Then their scripts are performed by professional actors on a live stage. It helps them to find their voices—and use them to be successful in life."

This year, Reyes is also participating in 50 Women Can Change the World in Media and Entertainment, a leadership initiative launched by nonprofit organization Take the Lead. Take the Lead’s mission is to support women taking their fair and equal share of leadership by 2025—accomplished, in part, by examining and redefining their relationship with power, and training them to become “game changers” in the industry while supporting others who do the same. “I’m learning a lot from other women in my cohort, and about the opportunity to keep growing as an executive,” she says. “At the same time, we’re trying to push the agenda of gender equity—to change the landscape of media and culture.”