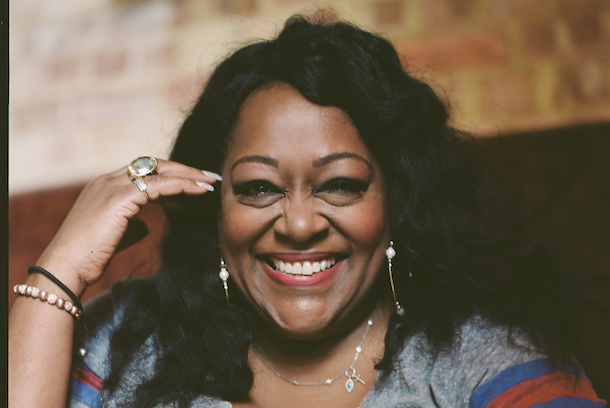 “I knew I could do the singing. It’s the business side of things I wanted to learn: reading contracts, growing a label, pressing a record.”
—Kym Mazelle

“Back in college, I was a single mother,” says Mazelle, who graduated from Columbia College Chicago with a bachelor’s in Arts, Entertainment, and Media Management (now Business and Entrepreneurship). “Going down to the clubs, to places like The Warehouse, I had to find time between working and interning and raising my daughter.”

Established in 1977, The Warehouse was a Chicago nightclub prominently known as the birthplace of the House music genre, which Mazelle describes as a result of DJs experimenting with dozens of various musical stylings—disco, funk, soul, and jazz—into dance-focused tracks.

Before Columbia, Mazelle studied opera and voice pedagogy at Mundelein College, but soon realized that singing, while her passion, was not what she wanted to study. “I knew I could do the singing. It’s the business side of things I wanted to learn: reading contracts, growing a label, pressing a record.” After learning how to broker deals and manage herself thanks to Columbia, she began her own small label in New York City with her business partners—two men she met through internships while in school. “The music we made was something new, something of our own. And it ended up becoming House.”

In 1987, they pressed 2,000 copies of her first album, which included the hits “Taste My Love,” “Useless (I Don’t Need You Now),” and “Wait.” These songs hit the United Kingdom club charts in the late ’80s, and her career took flight: Mazelle signed with United Kingdom label EMI Records for a million dollars, and later moved to London, England, where she lives today.

Since then, Mazelle has lived a life that many budding artists dream of: She’s worked with icons like Mick Jagger and Chaka Khan, and went platinum with her cover of “Young Hearts Run Free” for Baz Luhrmann’s Romeo + Juliet. For any well-rounded artist, Mazelle thinks, it’s valuable to know how to navigate the industry on your own terms. Last December, Mazelle visited Columbia to share these experiences with students aiming to find similar success.

Having launched her 30th anniversary tour in 2017, she shows no intention of slowing down. Mazelle’s mastery of business and performance brought her widespread success abroad, but she still circles back to her hometown: In 2017, she received the Gary Legends award and a key to the city, joining the likes of the Jackson 5.