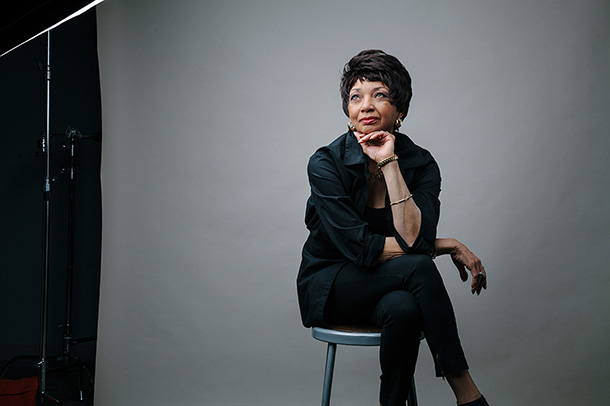 Bobbi Wilsyn’s storied career as a vocalist led her to teaching music and life lessons in the Music Department of Columbia College Chicago.

Bobbi Wilsyn excels at finding the poetry in music and life. As an associate professor in Columbia’s Music Department, Wilsyn brings her years of experience as a vocalist to the classroom, where she teaches more than just music.

Wilsyn got her start on the road, singing at Los Angeles clubs in the ’70s. She was discovered by producer Milt Trenier, who took her across the country to perform in night clubs and hotel shows, and she eventually landed in Chicago.

Wilsyn has appeared in national and international jazz festivals and is the featured jazz-blues vocalist with the internationally known Chicago Jazz Ensemble. Her first solo album, It’s About Time, features some of Chicago’s greatest contemporary jazz and blues musicians. For Wilsyn, her music career and teaching are symbiotic.

“If you can apply [what you learn] to your singing, you can apply it to your life,” says Wilsyn. “Try to live without breathing, try to sing without breathing. It’s all interconnected.” As an instructor, Wilsyn offers words of wisdom (or WOWs, as she calls them) that ensure she teaches both life and music skills.

The Journey of a Teacher

Wilsyn’s first experience with Columbia began around 1983, when Gloria Morgan, Columbia Music professor, asked Wilsyn to assist her with a Christmas concert. The concert was a major success, and then-department Chair Sheldon Patinkin took notice, asking Wilsyn if she would co-teach a choral ensemble with Morgan.

“It was required that we have at least 20 people enrolled,” says Wilsyn. “90 students enrolled in the course the first semester.” Wilsyn’s role in the department grew from there, and eventually she became a senior lecturer and department coordinator. Today, she is in charge of several vocal and choral classes and gives private lessons.

Wilsyn helps move students from a place of raw talent to focus and drive, unlocking the music scene of Chicago and potentially leading to a career. She also sees the classroom as a learning opportunity for herself. “What I always tell [students] at the end of the semester is, ‘Thank you for allowing me to teach a little and learn a lot,’” says Wilsyn. “I learn so much about myself from sharing my experiences with them, and I also love the fact that I can see, or feel, or intuit when the light bulbs go off.”