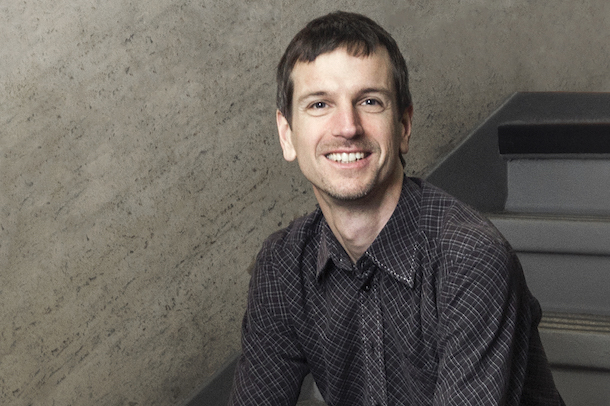 “Audio is one of the few fields where you can do serious art work, but at the same time [develop the] skills you need to get jobs.”

Florian Hollerweger teaches students skills that enable them to make art and find jobs in tech and audio.

On a dimly lit stage, Florian Hollerweger improvises music for a rapt audience. But his instrument isn’t made of wood or brass or string: It’s a computer. In what is known as a “live coding” performance, Hollerweger, an assistant professor in Columbia College Chicago’s Audio Arts and Acoustics Department, writes software “that creates sound and musical structures,” he says. Live coding offers a different way of thinking about programming, as an art instead of just a marketable tech skill. In fact, Hollerweger’s career attests to the creative possibilities of coding and its influence on the audio field.

The set-up for live coding is simple. Hollerweger and fellow performers work on their own laptops in a shared system where they code together. Behind them is a screen where the audience can watch the code evolve. The programmers build on code the same way jazz musicians riff on chords and melodies. One programmer writes a few lines of code, and the others respond with their own code. What begins with silence and blank computer screens ends with a sonic composition written in real time.

Hollerweger, who hails from Austria and taught audio production and electronic composition at MIT for five years, also uses his coding skills to create sound installations and audio software. He spent a year working for Auphonic, a company that develops post-production software that optimizes sound recordings. The software basically does the work of an audio engineer: It equalizes frequencies, balances sound levels, and eliminates background noise, among other tasks, which makes it especially popular in the growing industry of podcasting. “In five years there are going to be more companies like this one,” says Hollerweger. “There are so many people who don’t want to become audio experts, they just want their podcast to sound good.”

In his classroom, Hollerweger teaches students skills that enable them to make art and find jobs in tech and audio. His students glimpse not only the expressive possibilities of programming, but the expansive nature of the audio field. As Hollerweger says, “Audio is one of the few fields where you can do serious art work, but at the same time [develop the] skills you need to get jobs.”