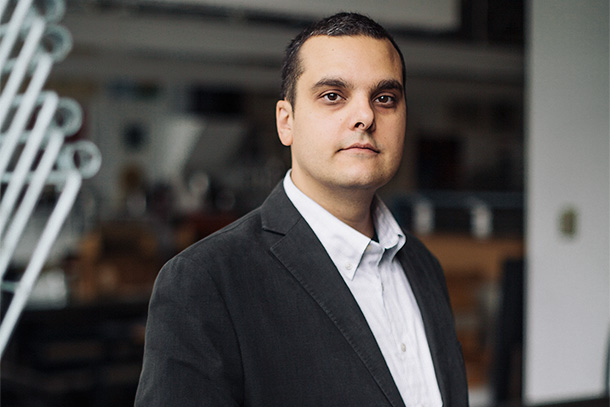 “Oftentimes, people think [experimentation] means without rigor. For me, it really means with iteration, with failing many times and trying again.”

Art and Art History associate professor Paul Catanese has a flair for experimentation. As a “hybrid media artist,” he’s constantly mixing different techniques—and he teaches his students to do the same. He teaches classes that focus mostly on technology, like coding languages and interactive media. Here are three things you should know about the prolific, passionate Catanese:

1. He plays with drones in the desert.

In an experimental project titled Visible from Space, Catanese created both indoor and outdoor installations in Arizona and “spied” on the art using small, camera-equipped drones. He said he spent the academic year studying drones—how they work and how to fix one when you’re in the desert—so he could immerse himself in the experience over the summer.

2. He literally wrote the book on post-digital printmaking.

Along with Angela Geary, Catanese wrote Post-Digital Printmaking: CNC, Traditional and Hybrid Techniques to document the ways artists blur the lines between traditional and digital printmaking. Essentially, artists can use digital software to control laser cutters and other physical machines. “It’s not that you just use a new technology or just use an old technology,” Catanese says. “There’s this other way of working with digital technology that still preserves the traditional press.”

When it comes to art, Catanese’s motto is: “Concept first, material second.” To get an idea across, he may have to use an unfamiliar method and learn along the way. “My whole practice is built on having to learn things that I have no idea about,” Catanese says.

He was no drone expert before he started the Visible from Space project, but through research and collaboration, he explores new ways to create his art. “Oftentimes, people think [experimentation] means without rigor,” Catanese says. “For me, it really means with iteration, with failing many times and trying again.”