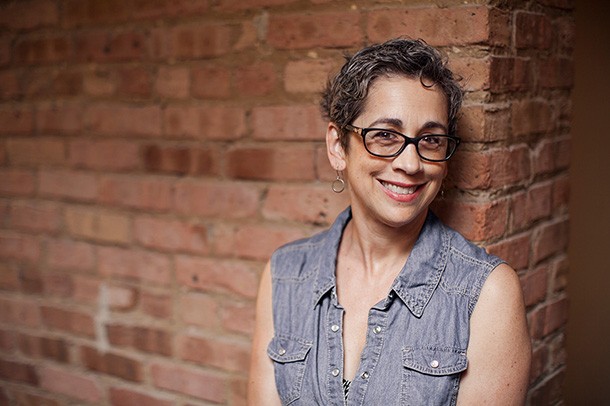 On breaking into the scene: When Theatre Associate Professor Stephanie Shaw ’92, MFA ’08 got her start in Chicago theatre, the problem wasn’t necessarily getting a break; it was getting the same break over and over again. At the beginning of her acting career, she kept getting typecast in the same role: the “earthy best friend-slash-smart ass.”

Bored with that routine, Shaw took a break from acting and served as one of the Chicago Reader’s theatre critics from 1993 to 1995, which gave her a new perspective. She says her editors at the Chicago Reader made her question why a piece of theatre was made.

On finding her voice: After she left the Chicago Reader, Shaw spent four years with experimental theatre group The Neofuturists. Her stint with the collective gave her the guts to start doing solo performances. She also started writing, directing, and teaching at her alma mater.

“At that time, Chicago’s theatre scene was hugely exciting,” Shaw says of her undergraduate years. “That was back when Steppenwolf was in its infancy. Steppenwolf folks were [teaching] here, then.”

She says the Chicago theatre scene has since exploded. The gritty realism of Steppenwolf is still embraced, but there are also more storefront theatres and more opportunities for all types of work.

“And if you’re not finding a place, you can just make a place for yourself,” she says, citing the much-lauded Jackalope Theatre as just one of the companies Columbia grads have founded in recent years. “You’re free to experiment here, you’re free to fail here, you’re free to take creative risks here. It’s not like the industry in New York, where you have to be perfect immediately so that someone will pick you up and you’ll make lots of money.”

Her best advice for students: Don’t pigeonhole yourself. “You might come here to be an acting major. You might leave here a playwright,” she says. “There’s room to try a whole lot of different things, and you should be open to all of it.”