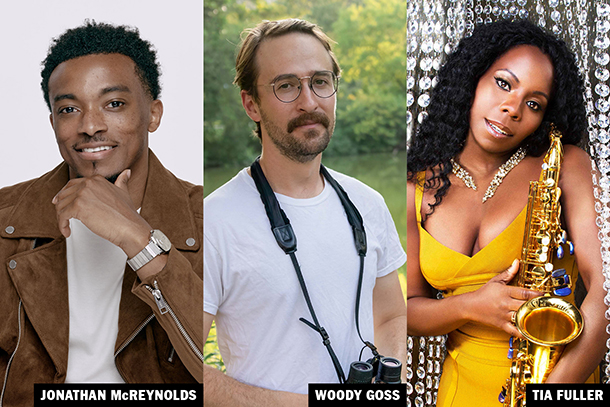 Students collaborate with renowned artists representing a range of genres and styles.

The Music Department brings nationally and internationally recognized professional musicians to Columbia for week-long residencies every semester. The artists lead workshops, master classes, and rehearsals with student ensembles in preparation for recording sessions and public performances.

Columbia will welcome three esteemed professional musicians to workshop, record, and perform with Music students as part of the 2021-22 Artists-in-Residence program.

The evolution of Jonathan McReynolds has taken us from a college dorm in Downtown Chicago, to stages across the world and to music’s highest honors. Garnering the friendship and support of greats all over the industry, this Grammy award winning artist is creating new space for what it means to represent Christ in music. Just 31 years old, Jonathan uses his incredible voice and beautifully candid approach to songwriting to reach the ears and hearts of fans worldwide.

The EOne artist’s last full-length album Make Room debuted #1 on Billboard Gospel. It was undeniably regarded as his best work to date, winning eight Stellar Awards and obtaining two Grammy nominations. The title track "Make Room" and hit single "Not Lucky, I'm Loved" gave Jonathan his first two #1 Billboard songs. His second album Life Music: Stage Two features another superstar fan in India.Arie and maintained at #1 on the Billboard Gospel chart for 4 weeks. It then went on to grab a Grammy nomination, multiple Stellar nominations and a Dove Award win. For his EP Sessions, Jonathan teamed up with another beautiful voice, Tweet. This unannounced, surprise release reached the top of the iTunes Christian chart overnight.

Jonathan continues to break major grounds in gospel. He has been a judge on one of BET’s top rated shows “Sunday Best” for the past two seasons. He starred in the BET original movie “Favorite Son” in Spring 2021. In 2018, his one hour TV special aired multiple times on TVOne and Jonathan was the first in his genre to form a major partnership with Tidal Music. His appeal stretches across generational, cultural, and musical lines. It is shown in the buzzworthy performances that have marked the last few years of his career including Black Music Honors (2018), BET Celebration of Gospel (2014, 2016) Essence Fest (2014, 2015), 106 & Park, Stellar Awards (2015, 2016, 2018, 2019, 2020, 2021), Joyful Noise, Revolt TV Live, and the Dove Awards (2017, 2018, 2019, 2020). In addition to headlining monster shows as far as Oslo, London, Kampala, and Kingston, Jonathan headlined two sold out American tours (33 cities), a wildly successful virtual tour in 2020, and a sold out groundbreaking residency at the legendary Troubador, and has toured with India Arie, Common and Lalah Hathaway.

In May 2011, Jonathan earned his Bachelor of Music from Columbia College and, in May 2015, his Masters of Arts in Biblical Studies from Moody Theological Seminary. Jonathan has great desire to have positive impact on society outside of music. With that, he is an adjunct instructor at his alma mater Columbia College, an official contributor to Huffington Post and the founder of Elihu Nation, a nonprofit organization that promotes wisdom and has awarded over $40k in scholarships for youth. Jonathan McReynolds has been honored and admitted as a member of Mensa, an international high IQ society.

Woody Goss is best known as keyboardist for the funk rhythm section and internet phenom Vulfpeck. The group, which started as a video project for a senior thesis, would ultimately go on to sell out Madison Square Garden without a label or marketing team. Having penned some of Vulfpeck's most well-known compositions, Goss was able to launch a career writing and recording instrumental music, often collaborating with singers and lyricists.

When he's not in the studio, Goss advocates the healing effects of nature by leading bird walks and making videos for the Chicago Audubon Society.

Her touring accolades include being selected to be a member of the Beyonce’s All-Female band; where she appeared on the Today Show, Good Morning America, The Ophrah Winfrey Show, The Ellen Show, The Grammy’s, World Music Awards and many others.  In addition, this Mack Avenue Recording artist has recorded five full-length projects with her quartet. Her most recent album, Diamond Cut, received a Grammy nomination in the Best Instrumental Jazz category; produced by three-time Grammy Award winner Terri Lyne Carrington, and legendary bassist, Dave Holland and drummer, Jack Dejohnette.  Additionally, she can been seen playing regularly with Terri Lyne Carrinton, Ralph Peterson Jr., Esperanza Spalding, Dianne Reeves, Rufus Reid and many more.

This past December, Fuller served as the sound behind the music of animated character “Dorothea Williams,” the sassy saxophonist (voiced by Angela Basett), from the blockbuster Pixar film, Soul.

Fuller has also expanded her presence as a model and essayist being featured in J.Jill’s “Rhythm and Blues” campaign, Vanity Fair’s “Women in Jazz” issue, and wrote an opinion piece for NBCNEWS.com on “Sexism in Jazz.”  Fuller has also graced the cover of Downbeat Magazine, Jazztimes, Saxophone Today, The Jazz Education Journal, and recently the Japan’s The Sax Magazine.

The dynamic saxophonist has also graced the cover of Downbeat Magazine, Jazztimes Magazine, Saxophone Today, and Jazz Education Journal. In addition, she has received numerous awards and marks of distinction including, winning Jazztimes Jazz Critics Poll for best alto saxophonist (2018), and Downbeat Critic’s Poll-‘Rising Star’ two years in a row for Soprano Sax (2014), Alto Sax and Flute (2013). In 2018, she has also received the Benny Golson Award from Howard University, the Distinguished Alumae Award and commencement speaker from the University of Colorado at Boulder and appointed as 2018’s Artist-in-Residence at the Monterey Jazz Festival.

As a Professor at Berklee College of Music, she also shares her expertise teaching over 70 students per week; directing the Rainbow big band and All Stars, the Esperanza Ensemble, repertoire class, jazz improvisation, two jazz combos and the Christian Mcbride Ensemble.  In addition, she produces and directs large production ground-breaking ensembles such as, the Beyonce, Bruno Mars and Ariana Grande Ensembles.  These groups focus on cross-collaboration throughout the college and is reflective of an “A-list” tour/production incorporating musicians, choreography, strings, dancers, video and lighting.  Between balancing her teaching and tour life,

As an artist, performer, and teacher, Fuller feels that she is fulfilling her purpose here on this earth, which is to “serve as a light for others.”