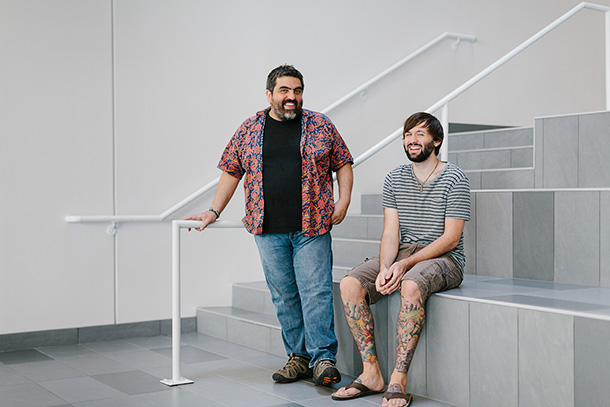 “I learned a lot more than I would have in a traditional class.”

As an IAM student, Justin Terry (BA '15) and associate professor of Science and Mathematics Luis Nasser team up to push video gaming code to the limits.

“Physics is not about what’s in the textbook,” says Luis Nasser, associate professor of science and mathematics. Applying the knowledge is what matters. In spring 2014, Nasser and Interactive Arts and Media student Justin Terry (BA ’15) applied physics to game design through an independent study (in which students can work one-on-one with faculty to learn subjects outside the normal curriculum). Now, Terry hopes his focus will become a full-fledged class by the time he graduates.

The two met weekly for physics lessons throughout the spring semester, and Terry incorporated the knowledge into a simple computer program that shows an adjustable number of balls bouncing around the computer screen. But that’s hardly the limit of what a physics engine can do. The code can be incorporated into any video game to make it follow the rules of physics, and therefore look more realistic—Terry plans to use the code in his collaborative game design project next year.

“That already puts him in a different situation professionally because now he’s the guy who gets the math,” Nasser says.

A game designer could simply use an existing physics engine that someone else has made (and they often do), but Terry says, “There’s always something to be said for knowing how something works.” By creating the code, not just copying it, he’s also better equipped to fix any problems that crop up.

Terry entered Columbia as an Audio Arts and Acoustics major with a dream of running his own studio, but a required programming class pushed him in a new direction; he decided to switch his major to Interactive Arts and Media.

“[I thought,] ‘All right, Columbia, I’ll take your advice and do what I want to do instead of what I think will make me money,’” Terry says.

He says the independent study was one of his best experiences at Columbia—he and Nasser focused on whatever aspect of physics he wanted to learn that week and weren’t restrained to a curriculum.

“That was a really cool way to learn because instead of trying to force myself to think about one topic when other things are coming up, [Nasser was] like, ‘Let’s just run with it,’” Terry says. “Because of that, I learned a lot more than I would have in a traditional class.”