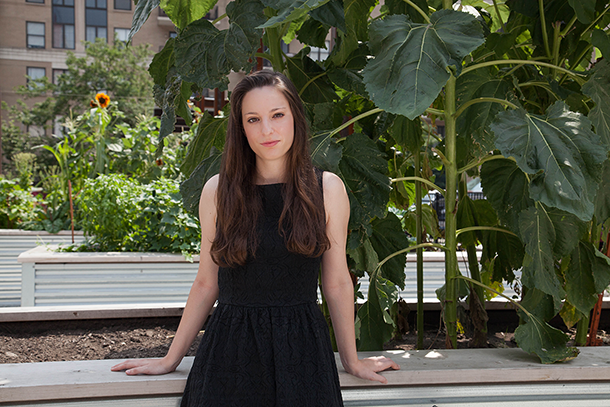 “Columbia had this unique sort of Hogwarts effect on me when I visited, like you were free to finally be all you’ve ever wanted to be.”

Musical theatre major Lauren Vogel ’16 makes the most of her talents and connections in the Chicago theatre scene.

“I wanted to be in Chicago, and leave Missouri,” says Vogel. Columbia had this unique sort of Hogwarts effect on me when I visited, like you were free to finally be all you’ve ever wanted to be. And it was, of course, magical.”

Breaking Into the Industry

Since coming to Columbia, Vogel has had numerous opportunities to showcase her talent. She says her proudest moment was getting cast in City On the Make, directed by the late, legendary theatre director Sheldon Patinkin, during her first semester.

“What better way to begin my life as an actress in Chicago than by being immediately cast into a musical that’s all about Chicago?” Vogel says. “This was also the very first show that I’ve been able to incorporate my violin into the theatre, which opened a door to what is now most of what I do.”

From there, Vogel immediately began auditioning for major roles in Chicago theatre.

“My second semester of my freshman year, I auditioned for a show at Trap Door Theatre called Core of the Pudel, and—to my surprise and delight—landed the role,” she says. A year later, that production was nominated for a Jeff Award. Since Trap Door, Vogel has performed with Walkabout Theater Company and The Hypocrites.

“Both of these companies are an absolute soul-feeding dream to me,” says Vogel, “and I am so proud to be a part of them.”

“Columbia has provided me with connections, more than anything. There are some true-blue gems that work here,” she says, citing Theatre Department faculty members Andra Velis Simon, Roberta Duchak, Stephanie Shaw and Scott Olson as inspirations. “Life, and college, is about people and what you can give each other.”