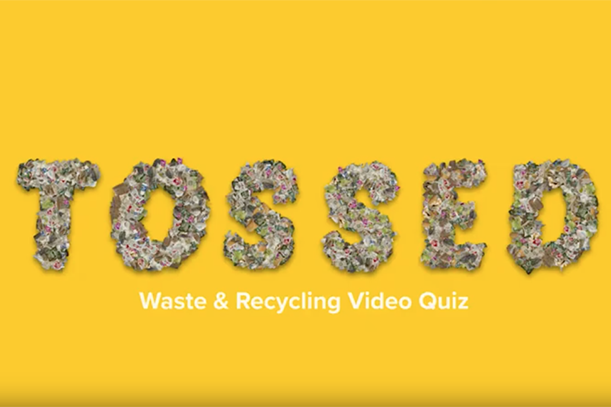 A still from Tossed (2020)
Columbia College Chicago CTVA student Patrick Thomas Keen will be awarded an Honorable Mention at the One Earth Young Filmmakers Contest for his short film titled "Tossed." He will receive his award in April, near Earth Day.

Columbia College Chicago would like to congratulate Cinema and TV student Patrick Thomas Keen on the Honorable Mention his short film, "Tossed," will be awarded an Honorable Mention Award from the One Earth Young Filmmakers Contest in April.

Patrick created a video quiz for students at Columbia College Chicago designed to teach them where the appropriate place is to toss their refuse: landfill, mixed recycling, paper, or compost. Patrick's goal in making the quiz was to promote more sustainable practices.

“Tossed” will screen as part of the One Earth Film Festival before the Young Filmmakers Contest Awards at 10:30 a.m. Saturday, March 7, at the Gene Siskel Film Center, 164 N. State St., in Chicago.

In addition, “Tossed” will screen before the feature film “Eating Up Easter” at 3 p.m. Saturday, March 14, with Plant Chicago @ The Firehouse, 4459 S. Marshfield, Chicago.

Want to take the quiz? Take it here! https://patrickthomaskeen.com/tossed