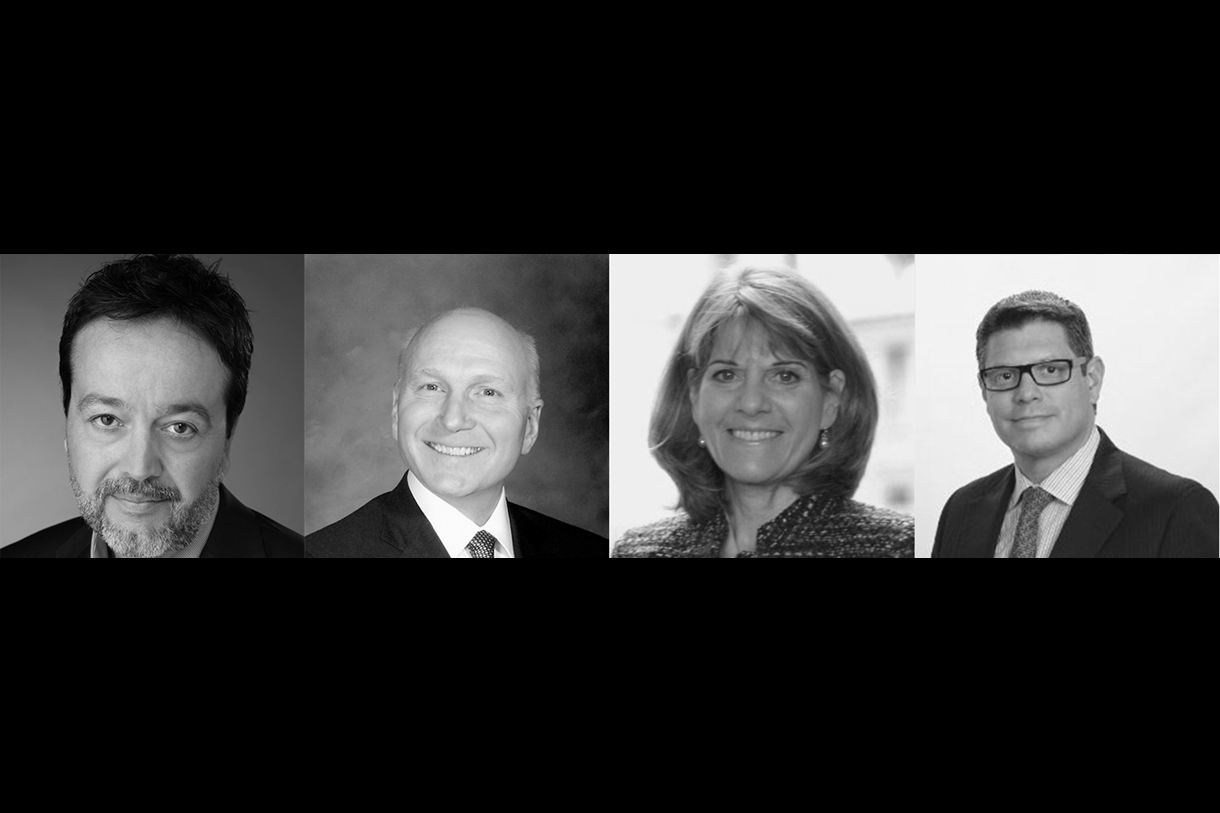 Columbia College Chicago welcomes four new members to the Board of Trustees after a vote on Oct. 28 that added Len Amato and Robert Buford alongside new recruits Luis de la Parra and Jane Gately, who were both approved in May.

Under the leadship of Chair Richard P. Kiphart, the Board has outlined a new set of recruiting objectives specifically aimed at finding candidates in fields related to creative industry, diversity, philanthropy and technology.

"What is exciting about where Columbia College Chicago is headed, in the same way the college is advancing strategically, our board is growing strategically focused on recruiting not only successful alums who can help us understand future trends in creative industries but also business and technology leaders whose support and expertise can help the College achieve its strategic goals," says Dr. Kwang-Wu Kim, president and CEO of Columbia College.

Each trustee is elected to a renewable three-year term and is asked to attend four board meetings a year, sit on 1-3 board committees, and fulfill a $10,000 giving component every academic year that can be directed to any area of the college.

“It's been incredibly inspiring to see Columbia grow from the intimate art school I remember to the powerhouse Chicago and national institution it has become, I felt like it grew up with me and I wanted to be part of its future.”

Len Amato is President of HBO Films for Home Box Office and is responsible for overseeing the development and production of HBO Films for the network. Since Mr. Amato took the helm in October 2008, HBO Films has garnered numerous awards and accolades. The 2009-2015 awards seasons produced 43 Emmy Awards and 12 Golden Globes for HBO overall. The Academy of Television Arts and Sciences awarded HBO Films the Outstanding Made For Television Movie Emmy in 2009, 2010, 2012, 2013, 2014 and 2015 (Grey Gardens, Temple Grandin, Game Change, Behind the Candelabra, The Normal Heart and Bessie, respectively) for a total of 20 Best Movie Emmys since 1993. With 11 wins and 15 nominations, Behind the Candelabra was the most awarded program at the 2013 Emmys.

Prior to becoming president, Mr. Amato served as HBO program executive and executive producer on 2008’s Outstanding Made for Television Movie and multiple Emmy-winning film Recount, starring Oscar winner Kevin Spacey and Oscar nominee Tom Wilkinson. Recount garnered Mr. Amato his first Emmy Award win and also began his association with director Jay Roach and writer Danny Strong who would later repeat their creative collaboration on Game Change. Prior to joining HBO, Mr. Amato was president of Spring Creek Productions. His producer/executive producer credits include: Analyze This and Analyze That; Possession; Deliver Us From Eva; Rumor Has It; The Astronaut Farmer, and the Golden Globe and Oscar nominated Blood Diamond. Prior to his career in the film industry, Mr. Amato was a musician and actor, performing at such renowned downtown venues as CBGB’s and La Mama Experimental theatre in New York City. He is a member of the Producers Guild of America.

Mr. Amato obtained his BA from Columbia College Chicago in 1975. He was honored as Alumnus of the Year in 2008 and as an Honorary Degree Recipient in 2015. Mr. Amato resides in Los Angeles.

"I have always believed that through education one is able to clear a path to living one's passion and realizing one's dreams. By serving on the Board of Columbia College I hope to contribute to the growth and success of this unique and dynamic institution."

Robert “Bob” Buford is the President and CEO of Planned Property Management, Chicago, which owns and manages 28 buildings, with over 3000 units. Buford was appointed by Mayor Rahm Emanuel to serve as a member of the Community Development Commission in 2011 and has served on the Board of The Heartland Institute, The Latin School of Chicago and Corus Bankshares, Inc. Mr. Buford is a wine collector and major collector of art, with a focus on post-Impressionist art.

Luis de la Parra is a Univision marketing veteran since 1995 and currently is the senior vice president of the Partner Solutions team focused on developing multi-platform, integrated marketing programs. De la Parra’s previous roles at Univision have included management of all operational aspects of innovation marketing, on-air promotions, commercial production, and on-air branding. He also was the director of marketing and promotions at KMEX, a highly-rated Univision TV station in Los Angeles, and led creative services for Univision, serving as executive producer for network shows centering on Hispanic heritage and the Rose Parade.

De la Parra has received several awards, including three Los Angeles Area Emmys for his work on the US Job Corp advertising campaign, on the Rose Parade programming, and in TV graphics. He also received a Chicago/Midwest Emmy in the Special Event category for “Chicago Celebra el Cinco de Mayo.”

De la Parra is an alumnus of Columbia College Chicago and earned a bachelor’s in film and video with a concentration in producing. He also attended the UCLA Anderson School of Management.

"Creative arts are essential to a healthy society. The Columbia students I have met are talented, motivated and inspiring and have every opportunity to make a difference in the world. I am inspired by the strategic plan and President Kim's passion for the personal and professional success of the students. I wanted to contribute to that effort."

Jane Gately is an ex-partner from Ernst and Young (EY). She has over 30 years of experience in technology strategy and corporate operations within the professional services industry operating in EMEIA (Europe, Middle East, India, Africa) and the US.

Gately has presented her technology and operational insights at UK conferences, numerous EY global committees, and think-tank environments. In 2010, she returned to the United States to address personal matters. Currently, she is providing pro-bono strategy work and serving as chairman to the Admissions Committee at the University Club of Chicago.

Gately earned a bachelor’s in corporate finance from Syracuse University and has participated in numerous corporate training programs across Europe.

She is a dual US and British citizen, currently residing in the Lincoln Park neighborhood of Chicago.