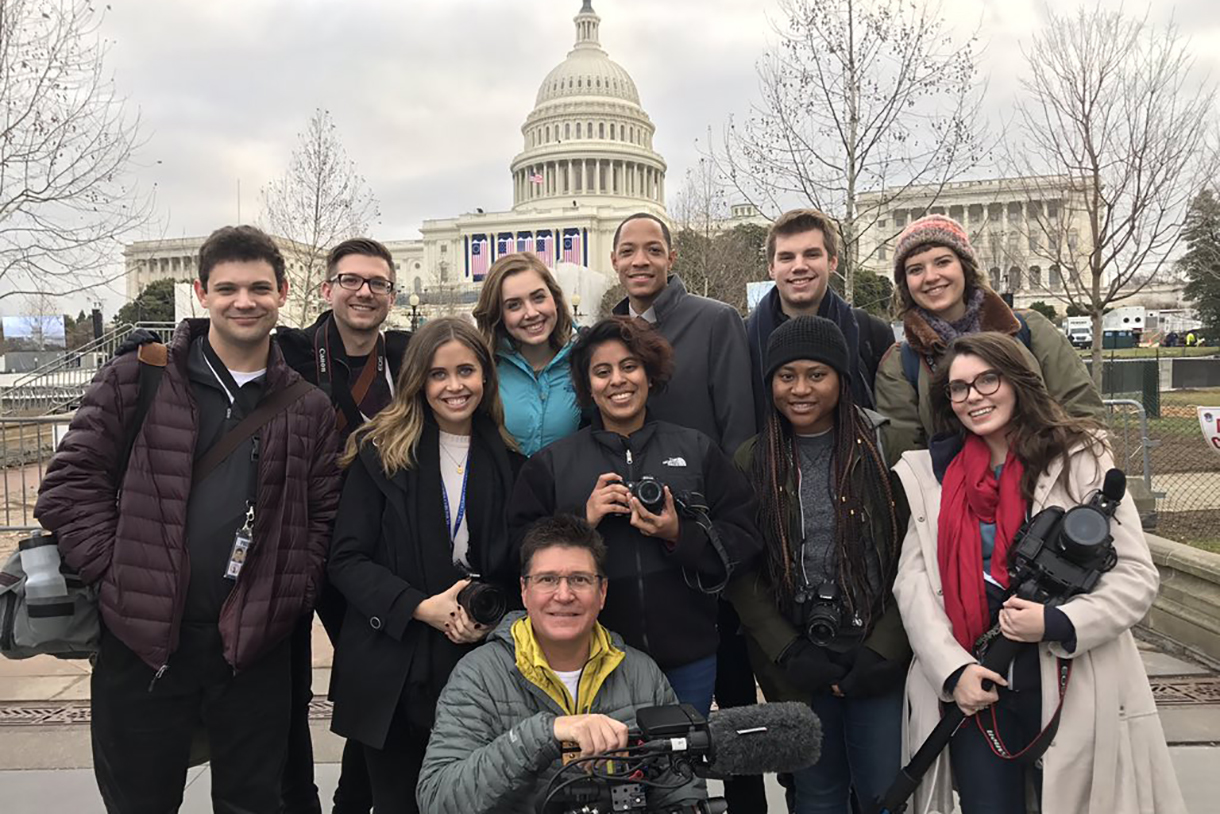 We're entering a new era of journalism,” says student Patricia Woods. “I know I should be as multi-skilled as possible. I might be a Multimedia Photojournalism major but I have to be prepared for any kind of work.” Woods was among ten students who went to Washington D.C. to do their own multimedia reporting live from the inauguration and the Women’s March. The trip was the focus of the new Communication and Media Innovation January Term course called Mobile Documentary.

The class spent two sessions combing over maps and discussing back-up plans if equipment or cell reception failed. Then, they packed into a van to ride ten hours to report on one historic weekend. 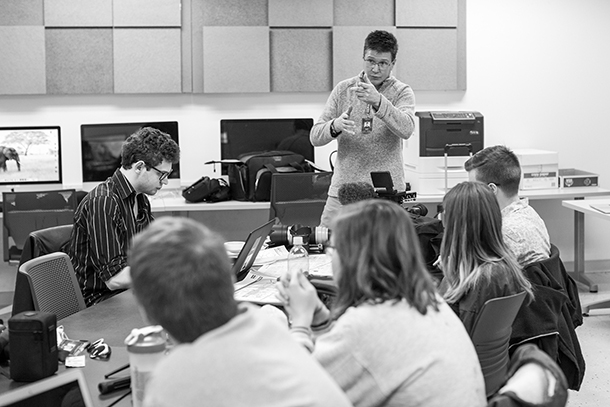 Working with limited tools, navigating through huge crowds and reporting live from the events were a true test for the students. "It wasn't just another day as a journalist," says Woods, "it was us going out and covering one of the most historic inaugurations in American history."

Even though Woods had a positive reaction from most of the people she photographed and interviewed, she was never certain of how people would respond to her being a student reporter and woman of color. “I want to confront the uncomfortable. Journalists have more curiosity and bravery than common sense.” 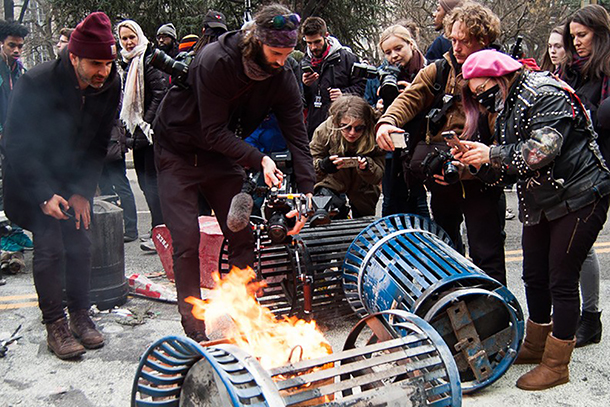 The Mobile Documentary class was taught by adjunct faculty Jon Sall. Besides equipping the class with practical skills while in the field, Sall also required the students to post content utilizing today’s various storytelling platforms during the two days. Sall, who is a Columbia alum with more than 25 years of experience, studied under Pulitzer Prize-winning photographer John H. White in the ’80s. “I’ve been around for a long time and am part of the digital transition that happened in photojournalism,” says Sall. “Teaching this class is full circle for me.”

The idea of the class started from a student. Last fall, Wood considered how she could receive class credit for reporting from the inauguration. Wood approached her advisor, Journalism assistant professor Jackie Spinner, who immediately thought she could develop a January term course around Wood’s idea. Spinner, who designed Columbia’s Multimedia Photojournalism major two years ago, thought the class would be an innovative way to teach students how to work on deadline while taking a digital-first approach to storytelling. Spinner and Sall worked together to create the class and they decided to open the class beyond photojournalism students to help foster an environment that better reflects the modern newsroom.

Alexandra Olsen captures the voices of women on both sides of the political spectrum.

For Journalism student Alexandra Olsen, partaking in the opportunity was experiential and personal. She took a political reporting class in the fall semester that focused on the campaigns leading up to the election. “We were really optimistic about Clinton winning.” Then, post-election, Olsen felt “emotionally drained” by the class. “I’m taking this class for a sense of closure.”

Since her original project proposal hinged on the idea of America’s first female president, she had to adjust. “I want to capture women’s voices—the women who are in support of the inauguration and those who are protesting at the Women’s March the next day.”

Many of the students found value in creating work outside of their comfort zones. Video: Nina Ruff.

Journalism graduate student Nina Ruff, who sees herself as more of a writer, was at first apprehensive about her photography skills. “It was a real run-and-gun environment. I had never done anything like this before,” says Ruff. “We were on our feet for more than ten or twelve hours a day, three or four days in a row.” Her strategy was to focus her attention on the work at hand, despite feeling like “an outsider looking in.”

“Actually, having a camera helped me be invisible. I was able to blend in as a journalist,” says Ruff. “As a black woman, I couldn’t not stick out, especially during the inauguration.”

For Ruff, Saturday’s Women’s March proved to be a slightly more inclusive community. “As great as it was, I wish that there was deeper sense of intersectionality.” However, she was able to step back to consider the bigger picture; the historical statement the march represented. “After this weekend,” Ruff says, “I do still wonder about longevity and impact of the movement.” 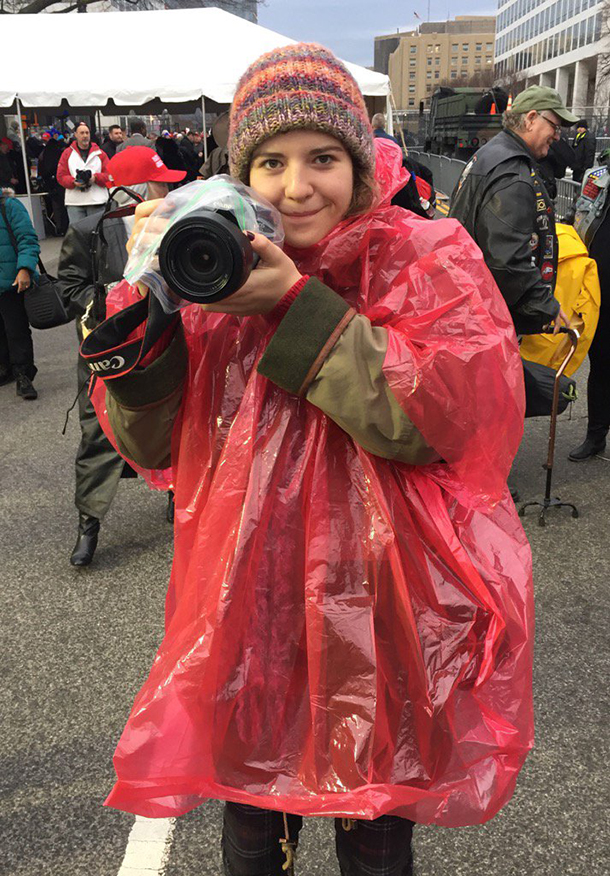 Photography student Robi Foli is geared up and poised for the moment. Photo: Jon Sall.

People watched in mixed emotions as Donald Trump was inaugurated the 45th president of the U.S. #Inaugurationpic.twitter.com/5NkpCDrAvy

Posing with signs left in front of Trump Tower in D.C. #womensmarch#MarchOnWashington@CCChroniclepic.twitter.com/YvlSeaYu5Z