Scoring for the Screen 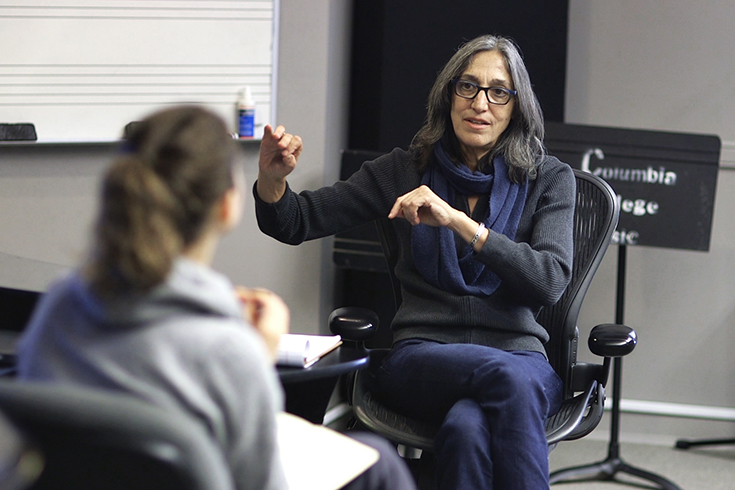 “When you add music to picture you change its meaning. There’s a huge responsibility, as a storyteller, to what that meaning is.” –Miriam Cutler. Image: Laura Mitchell and Phil Dembinski '08
Composer-in-Residence Miriam Cutler and Kubilay Uner, director of the Music Composition for the Screen MFA, discuss how they prepare student-composers for their industry.

When Kubilay “Kubi” Uner joined Columbia in 2014 as the director of the MFA in Music Composition for the Screen, he brought with him more than 20 years of experience making music for visual media. The Composer-in-Residence program, which Uner proposed, is designed so that each cohort of students gets to work closely with three different composers in residence before they graduate. Over the course of each seven-week residency, the students re-score a previous project by that composer. The composers-in-residence recreate the process of each particular project as they experienced it, to challenge the students to adjust to real-life situations. “It’s equal parts flight simulator and apprenticeship,” says Uner. “How better to learn art-making than with the artists themselves and with the conditions they had to work through?”

The five-semester practice-focused graduate program ends with a capstone semester in LA where students intern with industry professionals. This direct pipeline into the industry is “a real advantage,” says Miriam Cutler, this spring’s Composer-in-Residence. “I wish I had something like this when I was starting out. With the kinds of people that Kubi is connected to, the students are really getting the maximum exposure. It’s one-of-a-kind.”

The Emmy-nominated Cutler, who Uner calls the “queen of documentaries,” has been composing for the screen for more than 25 years. Her documentaries include The Hunting Ground and Lost in La Mancha. She’s been an advisor for Sundance Documentary Composer Labs since 2003 and is currently the only composer out of some 300 documentary filmmakers that comprise the American Film Showcase, an artist-to-artist diplomacy program of the US State Department in collaboration with the University of Southern California. She also mentors and teaches workshops in the US and abroad.

“This is the time for documentary. I feel like people are really hungry for facts and real information and a deep exploration of subjects,” says Cutler. “We’re in a cultural moment that leans toward denigrating intelligence, academic rigor, and real facts. There’s a certain maturity to the documentary approach.”

“It is essential for students to have a grasp on what the industry is actually like—not in theory, but in reality…with no sugar coating, no facades,” says Connor Cook MFA ’16. Cook currently works in LA as a freelance media composer, as well as an assistant to TV composer David Schwartz (Arrested Development and NBC’s The Good Place). “I learned a lot about how to write professional and creative music, but also how to interact in the industry. I found myself working on projects I typically wouldn't pick and I grew a lot from the experience."

Uner believes the music-for-media industry’s rate of change is moving fast: “New things keep coming and adding to the practice and the old ones aren’t going away. If you look at this year’s Oscar nominations, you see Thomas Newman next to Mica Levi in a group of five completely different scores.” Uner also cites composers like Trent Reznor, Nicholas Britell, and Heather McIntosh (Composer-in-Residence Fall ’16) as examples of music composers who are diversifying the industry with their work.

For more information, explore the Music Composition for the Screen MFA page.