The Work Behind WAC 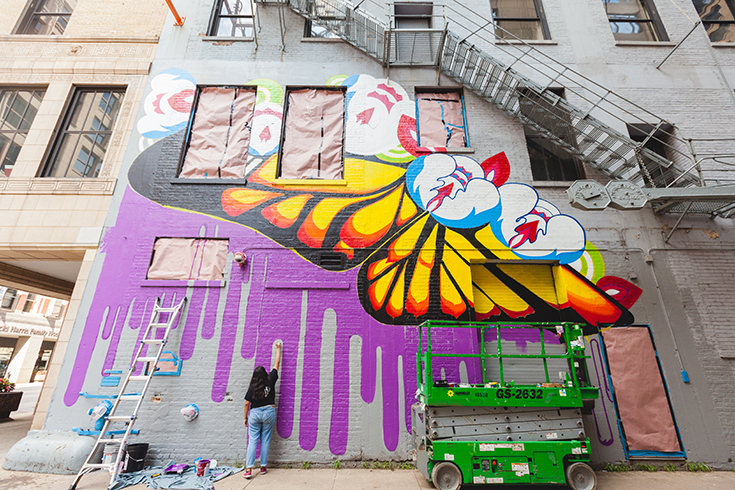 What inspires a muralist’s vision: is it the building the mural will be installed on, the audience who will see it, or the city it will live in? Why do muralists choose the medium, and how many sketches do they work through before finalizing a concept?

Process-based questions like these drive an exhibition that gives viewers a behind-the-scenes look at the many murals that make up the Wabash Arts Corridor (WAC). For the first time at Columbia, students in the college's Gallery Management practicum will curate an exhibition that features the ideas, planning, and materials behind each new WAC Street Level mural.

Sydney Pacha, practicum student and graduate candidate in the Master of Arts Management program, describes the course and its exhibition as a student-driven project. Like most classes, the project began with structure, assigned reading, and theory. “But the practice was all up to us,” says Pacha.

The students are preparing for the September 15 opening, the same day many of the murals will begin going up. Mural tours will begin at the exhibition, where visitors can familiarize themselves with the creative thinking behind each mural before heading out to see them.

Pacha, who is also a member of the WAC’s creative and production team, has an art history and anthropology background, but is reveling in her newfound community organization focus. “It matters when we use art as a tool for community building,” she says. “Visitors and South Loop residents will come and see these sketches and materials, and we can literally point and say, ‘They’re doing this down your street!’”

The show will also evolve as the murals go up, and time-lapse videos of the installs will be updated as the walls transform. “It reflects that street art isn’t permanent,” says Pacha.

Through the exhibition, Pacha and her classmates intend to highlight that permanence doesn’t always equal value, and the creative decision making that goes into a mural is just as important as the finished piece. “A building can go up and block its view,” Pacha says. “Paint can cover it.”