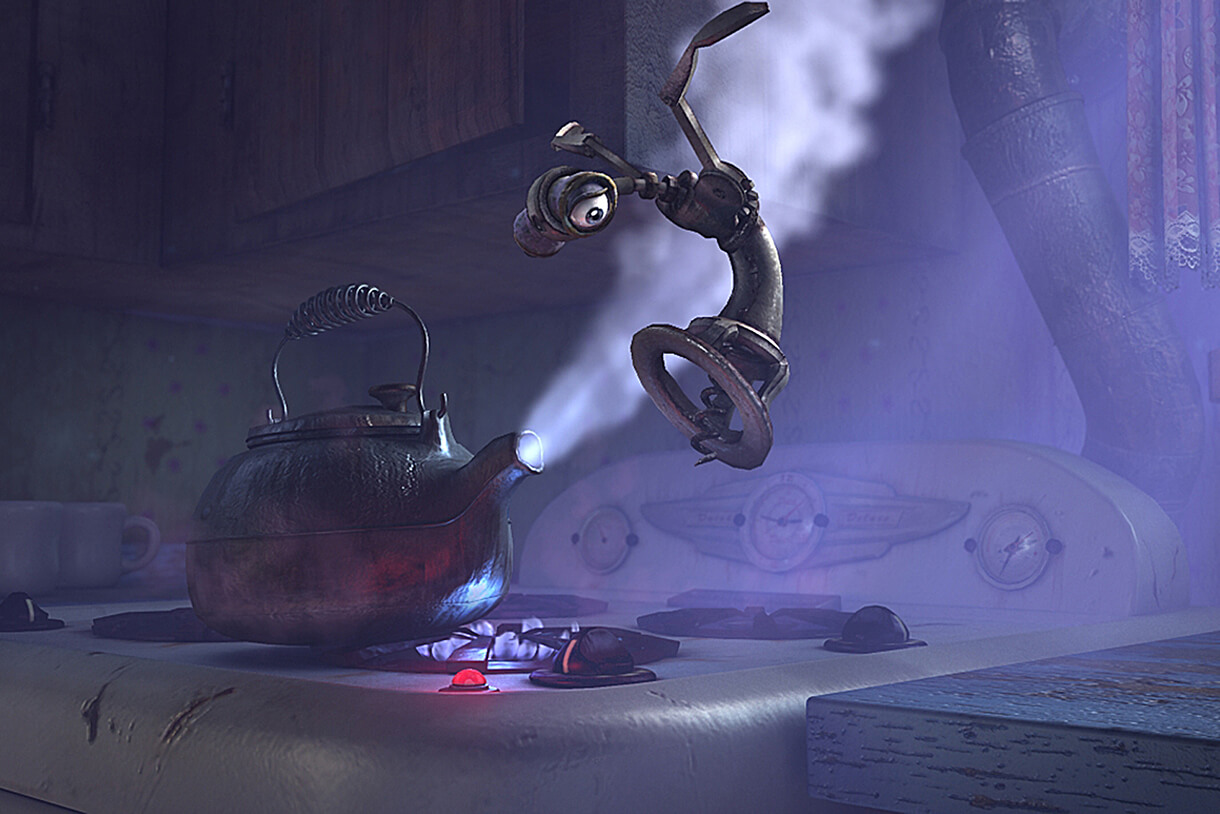 "Corky," which clocks in at six minutes, took more than six years to create. Image courtesy of Mathieson. 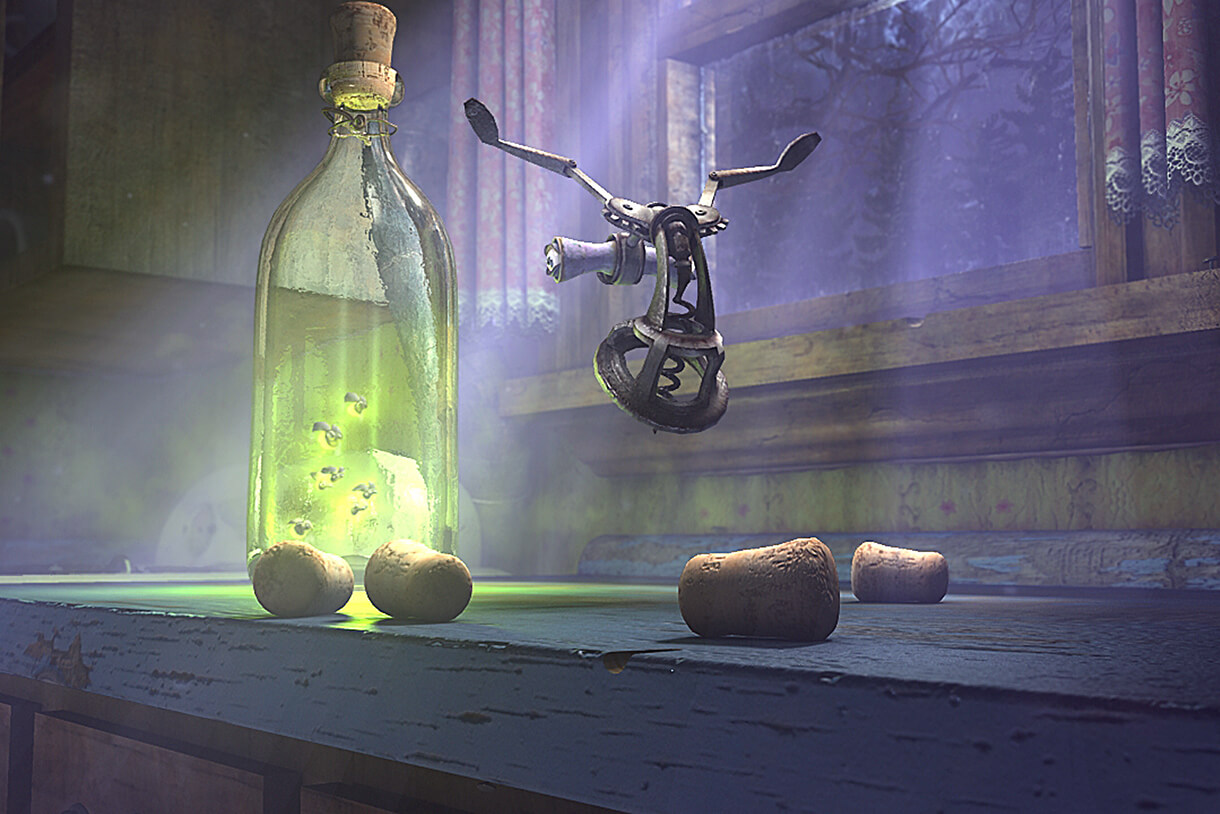 Filmmakers Mathieson and Primosch wanted to make a film with themes of acceptance, companionship, and gratitude. Image courtesy of Mathieson. 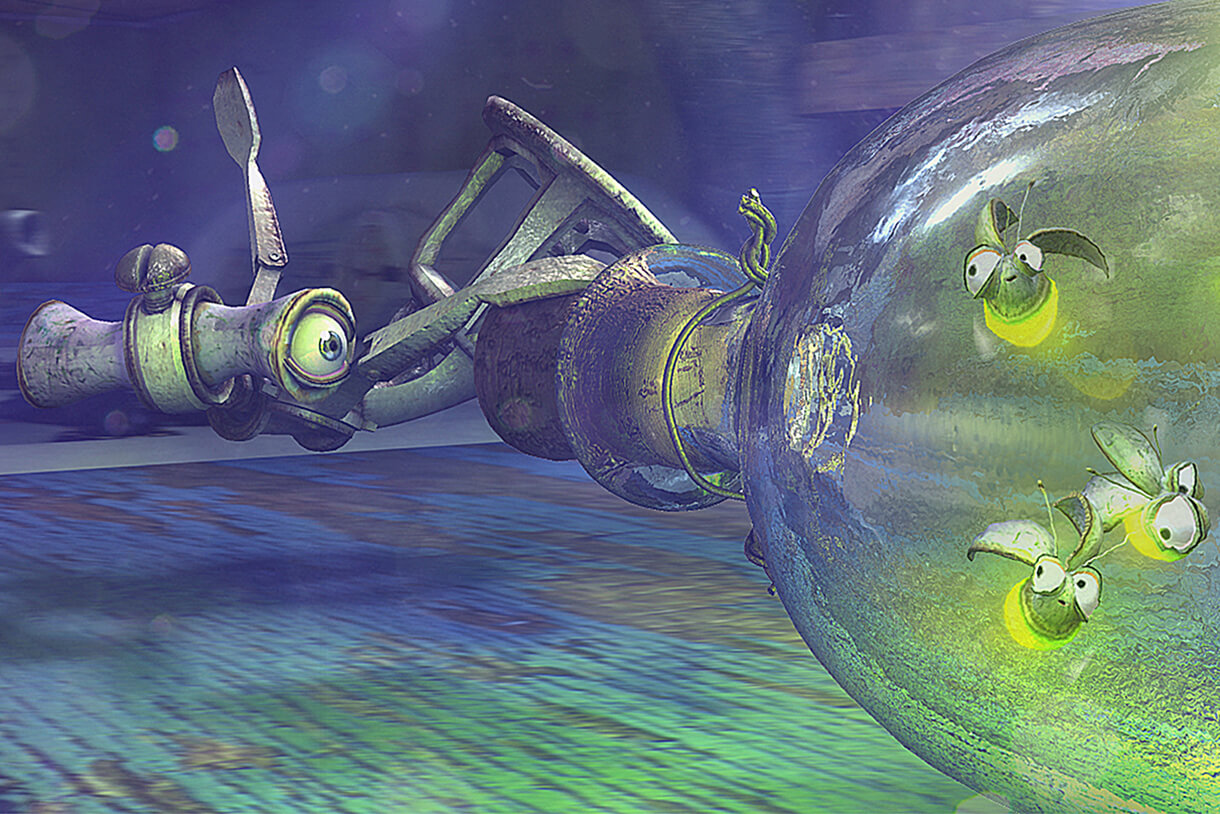 Over the summer, when Interactive Arts and Media Associate Professor K-J Mathieson’s award-winning Corky took home Best Animated Film at the SOHO International Film Festival, Incredibles 2 was breaking box office records, earning more than $180 million in its opening weekend. And in recent years, many animated feature films have gone on to gross over one billion dollars. For Mathieson, who produced the six-minute short Corky, the popularity and the impact of animation is powerful, no matter its size. “Anything is possible,” says Mathieson.

Corky tells the story of a corkscrew’s encounter with a glass bottle that entraps seven lightning bugs. Mathieson, with director Ty Primosch, found the idea for Corky when the two of them observed that a corkscrew’s motion shared an anthropomorphic resemblance to a human doing jumping jacks. Both Mathieson and Primosch enjoyed the visual appeal of literally capturing lightning in a bottle, but they needed to connect that image with something plot-based. “[We] realized we could create more empathy and opportunity by corking something living in the bottle, so we decided on lightning bugs,” says Mathieson.

Mathieson wanted to make a film that includes themes of acceptance, companionship, and gratitude. She believes that “it’s easier to receive [a] message through exaggerated characters. Take Zootopia, there were lessons on racial bias, but it was conveyed through predator and prey.”

“We wanted to make the kitchen feel special by assigning a heightened sense of appeal to every object in the world. We did this by carefully designing each kitchen item’s shape, material, and imperfections, as well as its unique relationship to other objects in the room.” —K-J Mathieson

Mathieson emphasizes the tension in this imagined world by magnifying the sight and sound of the small details: the slow swinging light, the cuckoo clock pendulum, the dripping faucet, or even dust in the moonlight. “We wanted to make the kitchen feel special by assigning a heightened sense of appeal to every object in the world. We did this by carefully designing each kitchen item’s shape, material, and imperfections, as well as its unique relationship to other objects in the room,” says Mathieson.

Mathieson’s attention to detail informs her teaching in the classroom, encouraging students to focus on quality and editing story ideas early on, before production ensues. This semester, she teaches Animation Preproduction and Animation Solo Project.

Many at Columbia first saw Corky when it screened at the 2016 Faculty Works event, as a part of the Faculty Development Portfolio, which is an initiative of the Office of the Provost. The filmmakers also collaborated with Music Composition for the Screen alum Tyler Durham MFA ’17, who created the original score for the film.

Winning Best Animated Film is no small feat at the SOHO International Film Festival—the festival receives hundreds of submissions—so naturally, Mathieson and her team were thrilled when Corky won. “When submitting to any festival it’s always a surprise to be selected, and an even bigger surprise if you win,” she says.

Since its release, Corky has continued its streak by winning Best Animated Film at the ONE Country ONE Film Festival and playing in over 100 film festivals across the world. Whether or not Mathieson’s next film is another independent production or a billion-dollar blockbuster, she’ll continue to illustrate important stories with big themes and small details.