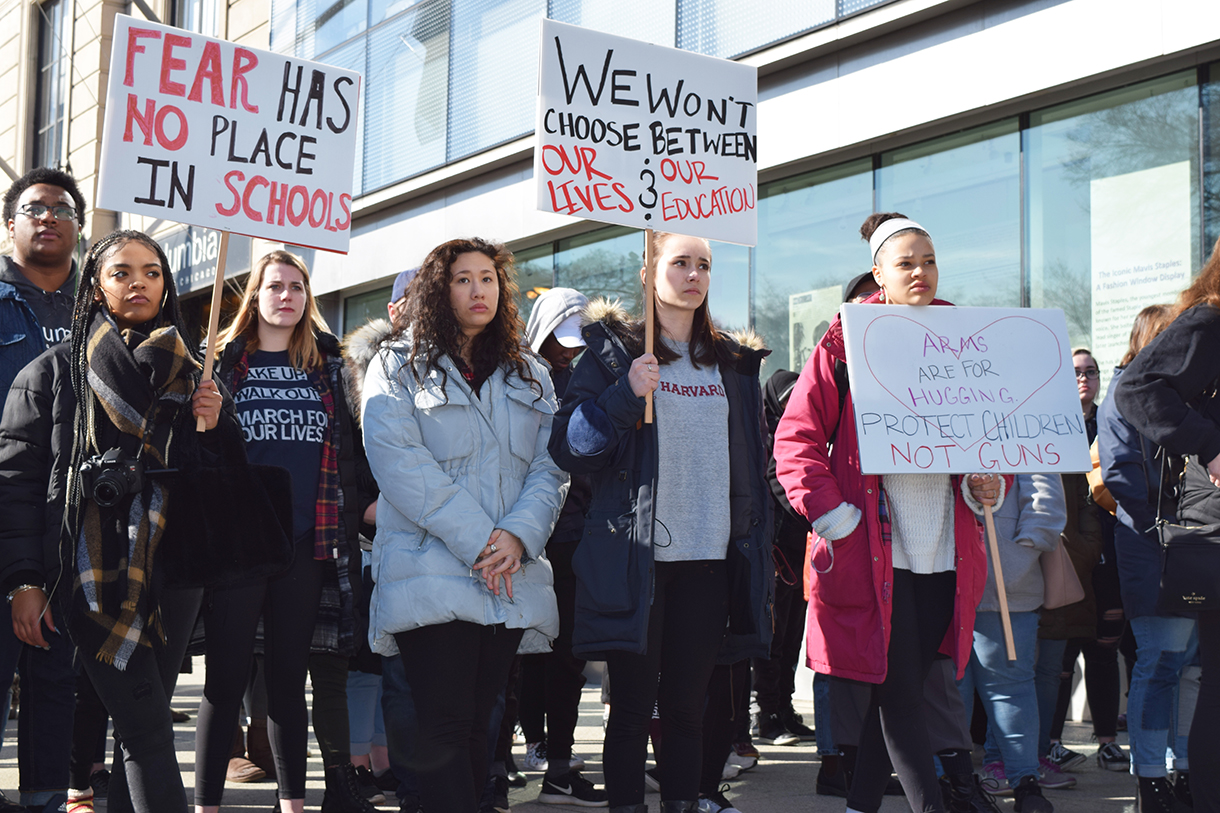 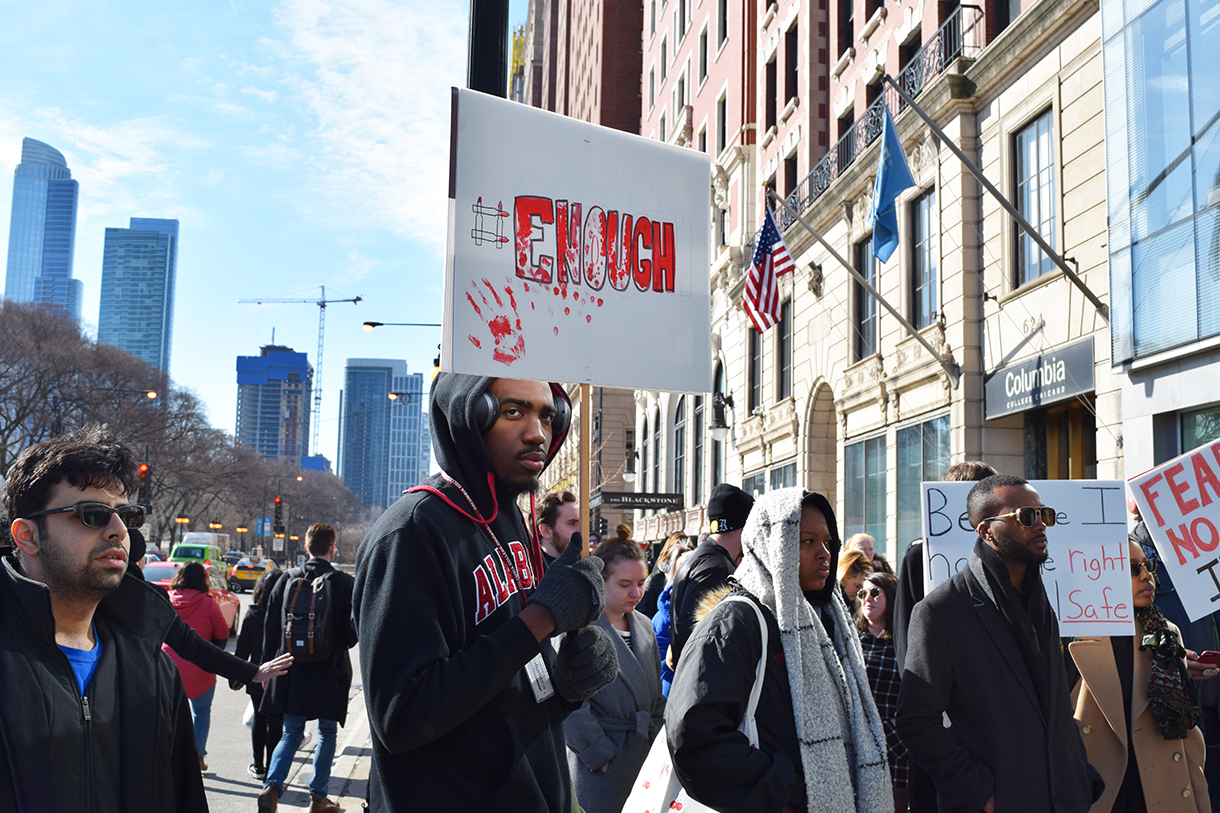 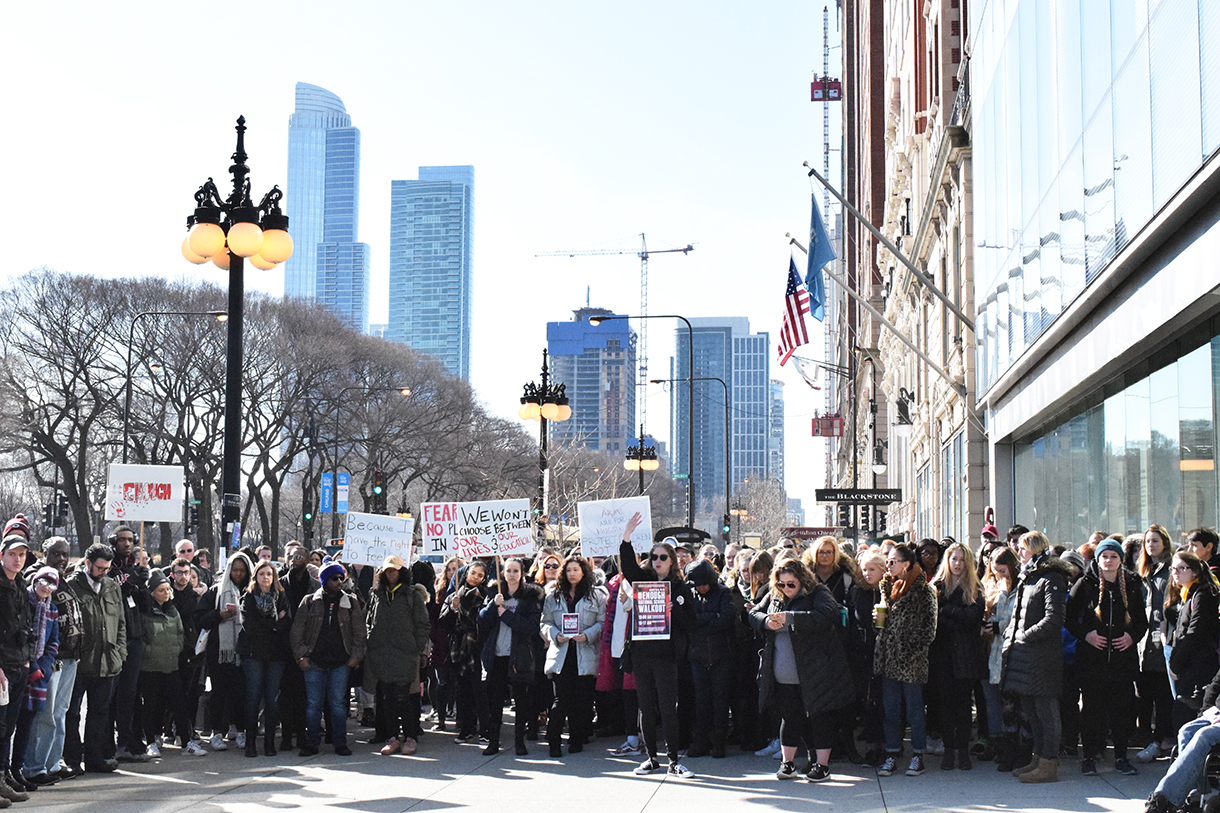 Photo: Heather De Guia Aguilar
Students participate in the nationwide walkout to protest the lack of action around gun control.

On Wednesday, March 14, Columbia College Chicago students joined high school and college students across the country for the #Enough National School Walkout to advocate for gun reform. Before the students dispersed, they took a prolonged moment of silence to honor the 17 lives lost in last month’s massacre at Marjory Stoneman Douglas High School in Parkland, Fla.

Students are gathering outside 618 S. Michigan and 1006 S. Michigan and walking out in support of gun reform #enough#cccenough#nationalschoolwalkoutdaypic.twitter.com/JKsR1uLwvH

Student Sara Jaffe partnered with the Student Government Association to organize the walkout at Columbia.

“Everybody here has the power to make a difference.”

Student Sara Jaffe, who organized the walkout in partnership with @ColumbiaSGA, addresses the crowd before a moment of silence #enough#cccenough#nationalwalkoutpic.twitter.com/Np4dHSXHwD

Like many others across the country, Columbia Photography student Kelsy Goodwin captured the images from the day.

Hundreds of schools participated in the walkout and many more on social media posted messages and pictures with #Enough.

Students walked out of classes and gathered outside 618 S. Michigan and 1006 S. Michigan at 10 a.m. this morning as part of a national movement to advocate for gun reform. The walkout lasted for 17 minutes to honor the 17 victims of the Marjory Stoneman Douglas High School shooting last month. The walkout at Columbia was organized by student Sara Jaffe in partnership with @columbiasga #enough #cccenough #nationalschoolwalkout

Faculty, staff, and alumni also voiced their support for the students via social media. Senior Associate Provost Suzanne Blum Malley, Senior Director of Enrollment Marketing Communications Andrew Whatley, Television faculty member Brent Kado, Business and Entrepreneurship faculty member and craftivist Shannon Downey, and many others all shared their support for the students and the #Enough cause.

The awesome @bysimonemalcolm in action covering the student walk out at Columbia College Chicago #NationalWalkoutDaypic.twitter.com/VbOtrDK3ro