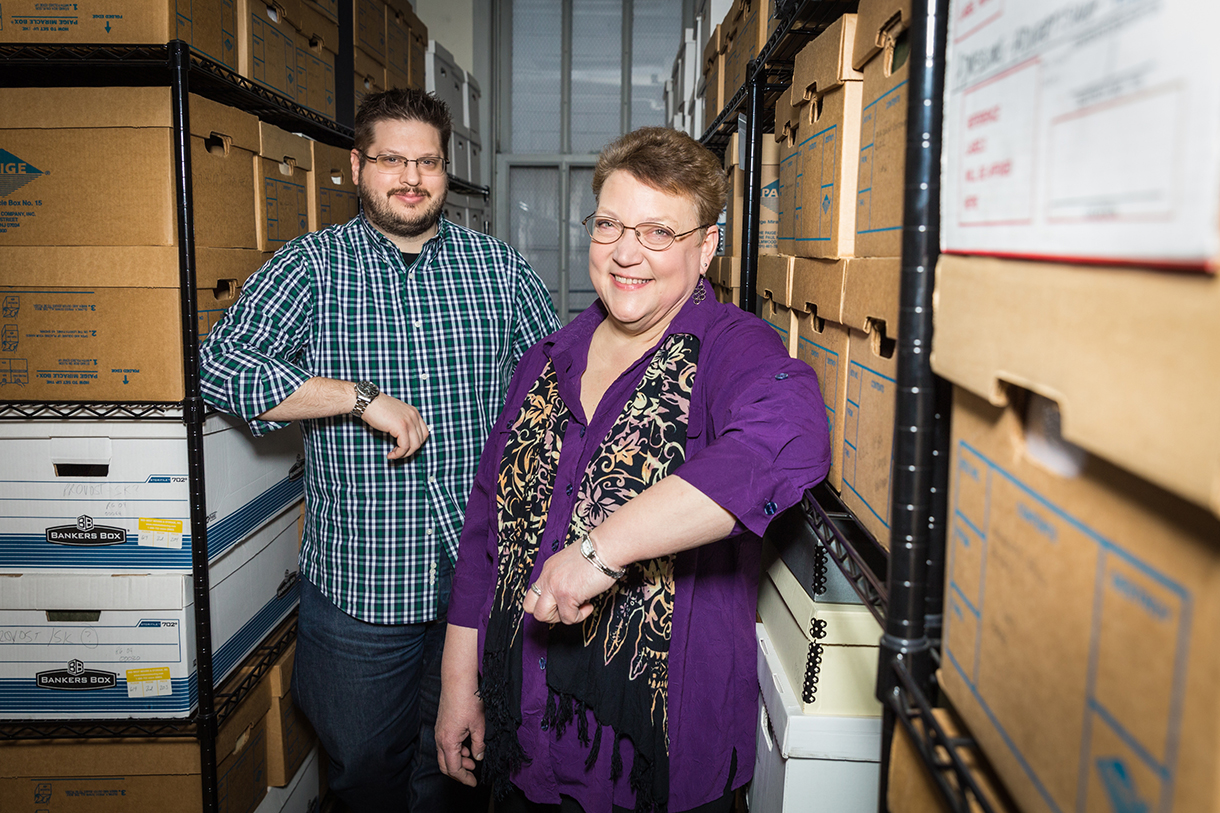 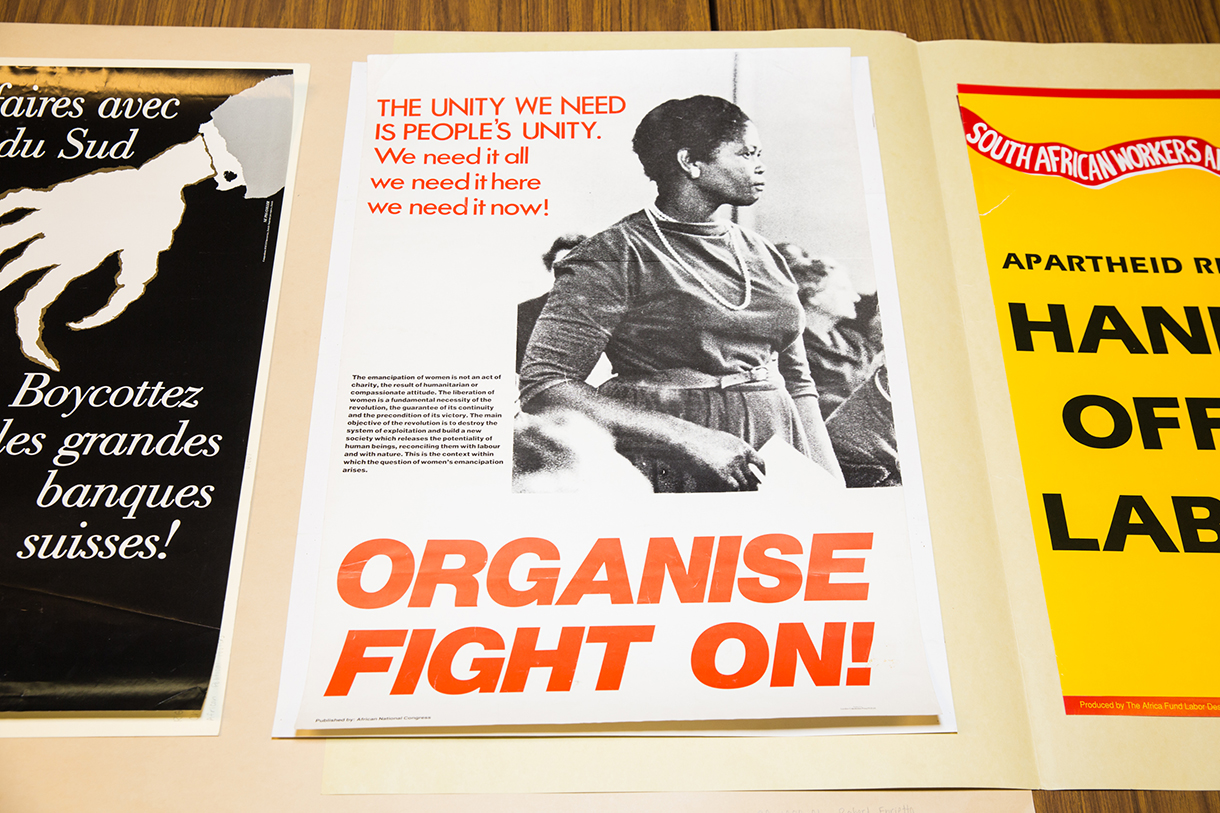 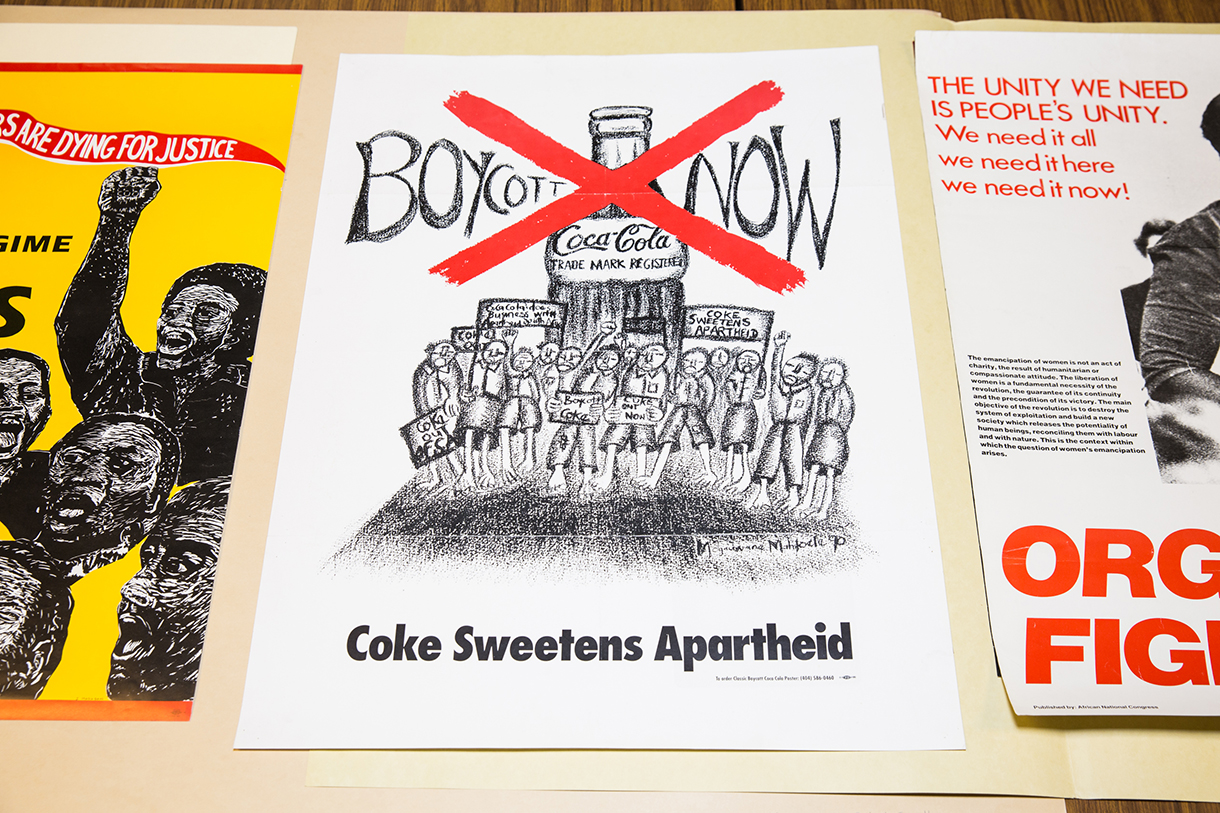 A poster from the Chicago Anti-Apartheid Movement Collection, one of the most viewed collections in the archive. Photo: Phil Dembinski '08 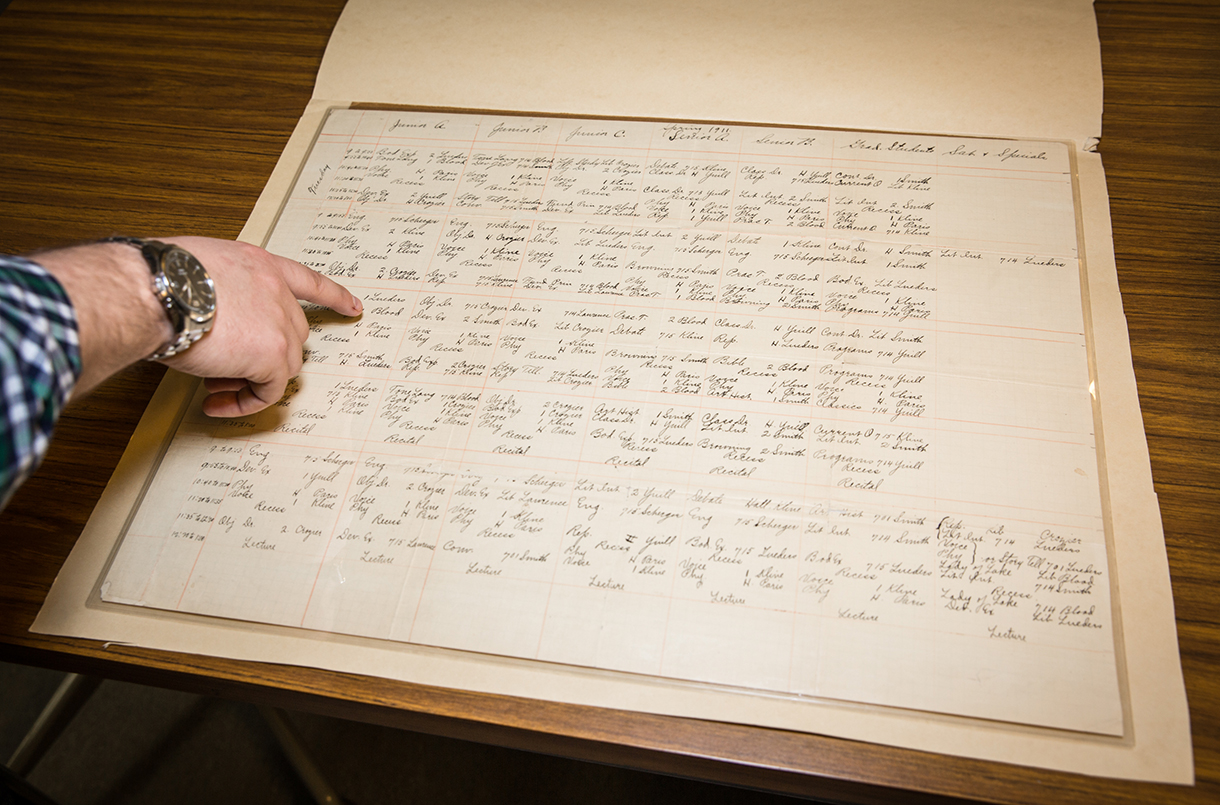 Columbia founder Mary Blood handwrote the first course catalogue for Columbia. Photo: Phil Dembinski '08
The College Archives and Special Collections finds and shares Columbia’s legacy of art, activism, and everything in between.

On one poster are the words “Don’t shoot.” On another: “What would happen if it was your child?” The posters were created by a little-known Columbia College Chicago student activist group in response to the violence at Kent State in 1970. They are some of the newest additions to the College Archives and Special Collections (CASPC), an ever-expanding hidden treasure on the Columbia campus.

While time may have dulled the posters’ edges, their messages remain relevant as ever. “Archival material is full of perspectives that reflect the time and space in which they were created and offer so much,” says Head of College Archives and Special Collections Heidi Marshall. “It tends to speak to generations later.” 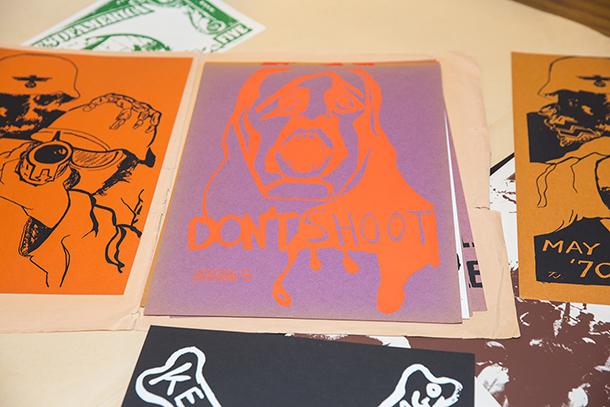 During a time of widespread student protest, a little-known student group called the Columbia Collective created these posters in 1970. Photo: Phil Dembinski '08

When Marshall joined Columbia in 2005 to begin the college’s first archive, 40 boxes sat in a corner office of the Library. With that as a starting point, Marshall began piecing together what was then Columbia’s 115 years of material history. “We were grasping at straws, doing anything to reassemble Columbia’s history to show a more cohesive, unified history of the college,” says Marshall. Now, CASPC houses more than five million sheets of paper and more than 50 million digital objects on their website.

In those early days, Digital Collections Specialist Dominic Rossetti ’06 braved through “many creepy Columbia basements.” Today, Rossetti and Marshall continue to find objects and artifacts from various places. It is not above them to dumpster dive, basement burrow, or scour eBay for that rare Columbia-related find.

Along with establishing the college archives in 2005, Marshall and her small team built the Special Collections, largely a result of the many manuscript collections already present. With her team, Marshall gathered the disparate collections from various departments and centralized them into one space. Previously housed in the Library, the Archives and Special Collections are now in 619 S. Wabash Ave.

The collections, which range from the Phi-Sigma Collection to the John R. Fischetti Manuscript Collection, support Columbia’s curriculum and are a valuable resource for researchers from all over. According to Rossetti, researchers from six continents, 192 countries, and more than 6,000 higher ed institutions have used the Archive’s site to access the digital holdings.

One of the biggest draws of the Special Collection is the Chicago Anti-Apartheid Movement Collection, which consists of more than 300 books, posters, and other material from the rich history of Chicago activism. Humanities, History, and Social Sciences faculty member Rozell “Prexy” Nesbitt personally donated much of the work from his family’s home collections. 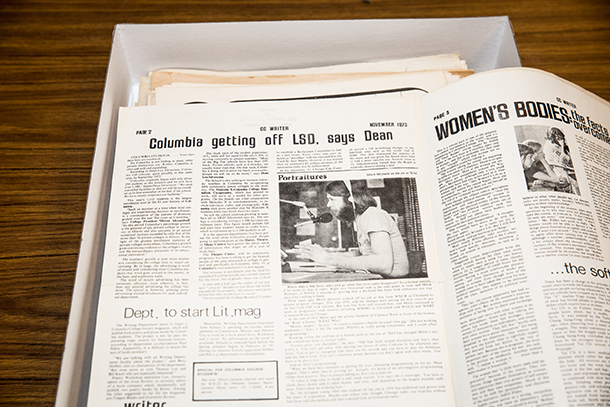 In reference to the relocation away from Lake Shore Drive, student journalists reach for attention-grabbing headlines in the CC Writer, the predecessor to the Chronicle. Photo: Phil Dembinski ‘08

“It’s not our job to interpret. Our job is to steward the information and make sure it’s research-ready,” says Rossetti. "And to be factual,” adds Marshall. The two, who have worked in the CASPC for its entire 13-year history, point out that, as archivists, their work must be free of bias. “We don’t use a lot of adjectives or adverbs in our descriptions,” Marshall says. “We try to capture it all: the good, the bad, and everything in between. We do this so we can present it for future generations to interpret,” says Rossetti.

Recently, an Interactive Arts and Media student requested access to old blueprints of one of Columbia buildings in order to render a building for a video game. “Researchers will always surprise you with their angle and it speaks to the creative process when people engage primary sources,” says Marshall. Currently, three student employees from various majors and interests assist in the Archives and Special Collections. On their blog, staff members and student employees chronicle the immersive experience of processing to how the archivist’s relationship to objects is “above” the function of a storyteller.

Associate Provost of Faculty Research and Development Ames Hawkins partnered with the Archives to debut learning modules and other faculty resources for projects in and out of the classroom. Beyond those resources, Marshall and Rossetti created many finding aids knowing that it can be daunting to enter the archives. “We encourage people to look at places they might not originally think of,” says Rossetti. “We collect the raw materials of history, make them available, and help people engage them in different ways,” says Marshall. “There’s no bad way of reaching out to us.”