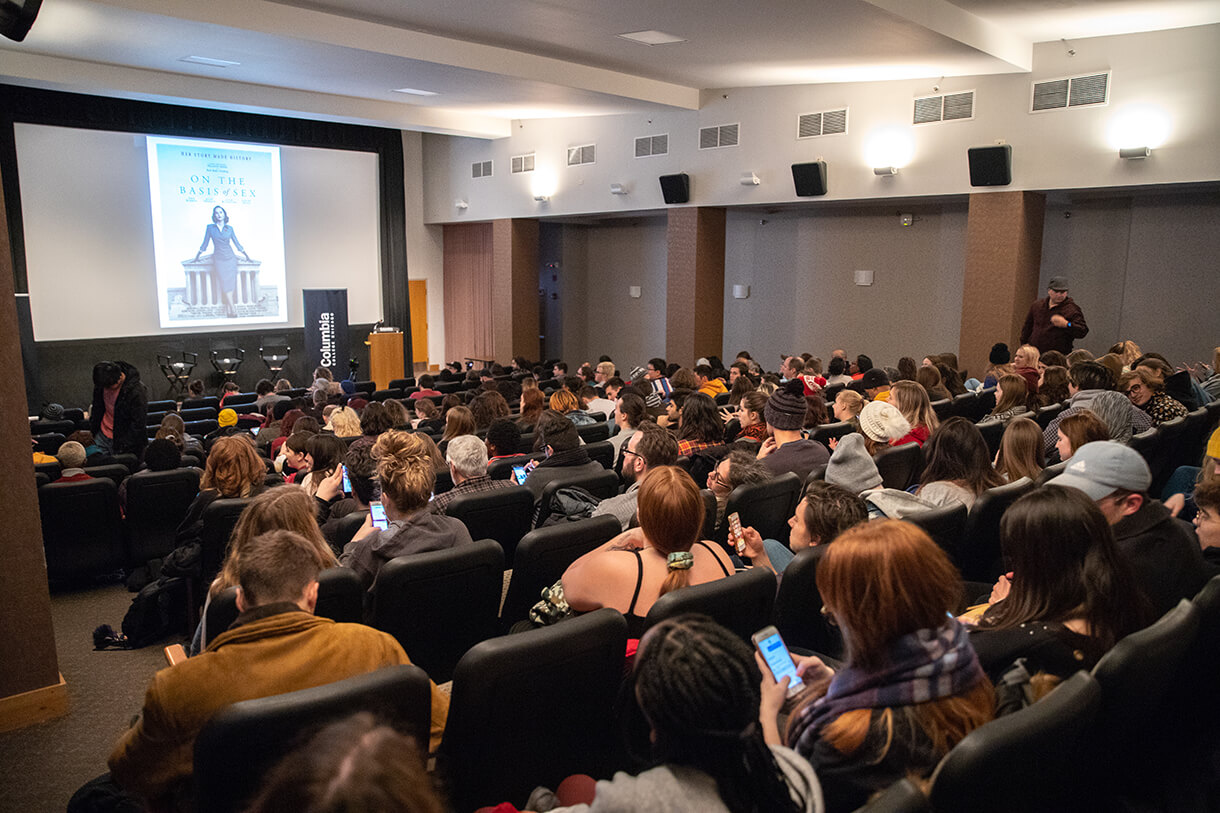 An advance screening for Columbia was held at Film Row Cinema on November 27. Photo: Daniel Livingstone. 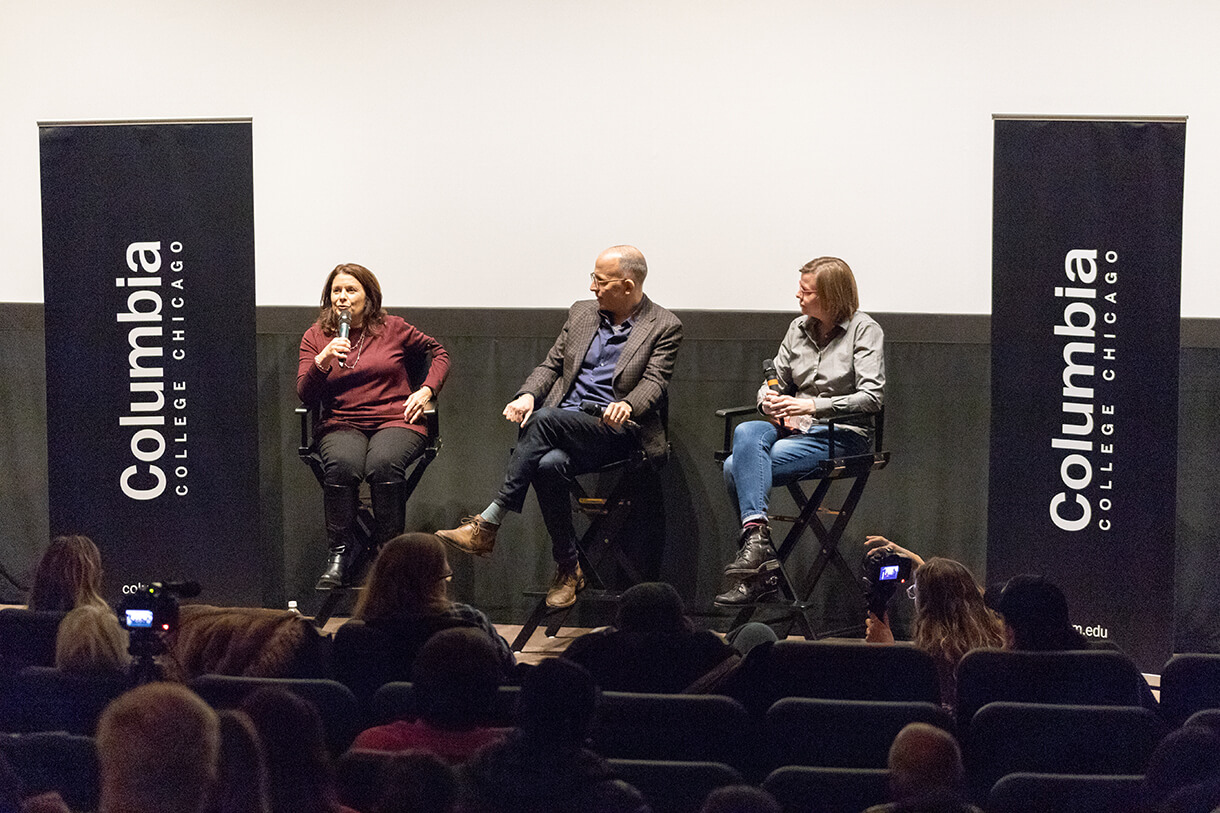 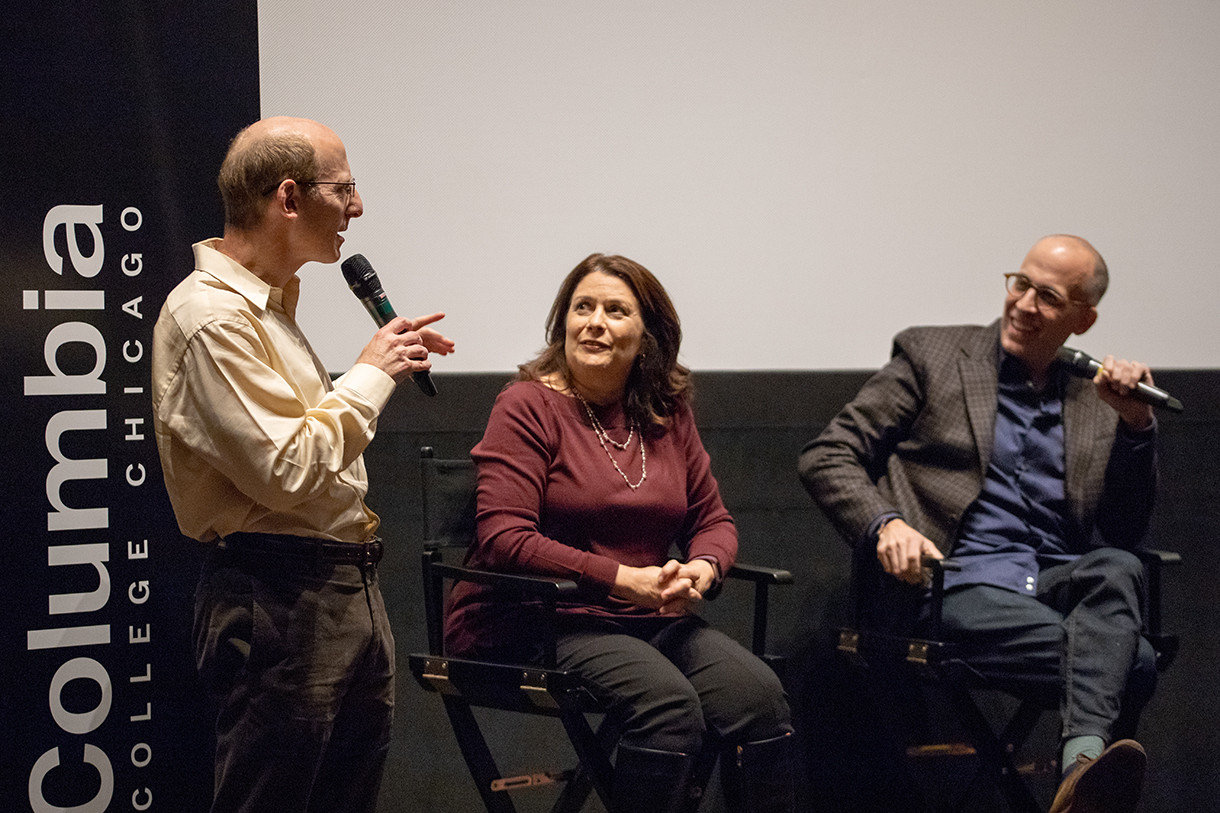 Ruth Bader Ginsburg’s son, James Ginsburg (left), watched the film for the first time that night and joined Loop and Stiepleman in the post-screening Q&A. Photo: Daniel Livingstone.
Former faculty member Daniel Stiepleman, the screenwriter of the Ruth Bader Ginsburg biopic "On the Basis of Sex," recalls finding his voice and getting his big Hollywood break with the help of Karen Loop, associate dean of Los Angeles programs.

In June 2010, 29-year-old Daniel Stiepleman had an epiphany. At his uncle’s funeral, he listened as friends and family eulogized the successful tax attorney. How he and his wife, also a lawyer, had been equal partners in work and in the home. How they had worked together on only one case, but it was a case that would forever alter the course of gender equality in the United States. These were no ordinary lawyers. They were Martin Ginsburg and Ruth Bader Ginsburg.

Stiepleman, an NYU film school graduate teaching in the film department at Columbia College Chicago, immediately thought the story would make a great movie—but he quickly talked himself out of it, thinking it was inappropriate to mine his deceased uncle’s life for material.

But months later, back at work at Columbia, he couldn’t shake the story. One day, while bouncing around script ideas with his supervisor, then-associate professor Karen Loop, he told her he wanted to write about his Supreme Court justice aunt— not only about Bader Ginsburg’s early days of fighting gender discrimination, but about how her professional and personal partnership with Martin propelled her to make history. 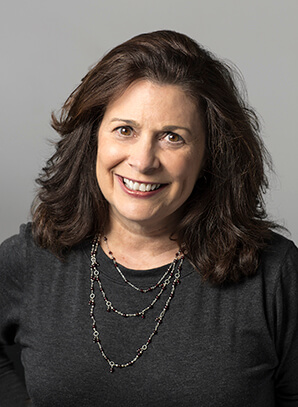 For Loop, who became Columbia’s associate dean of Los Angeles programs in 2017, taking an idea born eight years ago at Columbia from the page all the way to the screen has been a complete professional triumph. Photo: Phil Dembinski ’08.

“It was the first time I had ever admitted to anybody that I had had this story in mind,” Stiepleman says. Loop, who had years of script development experience with Paramount Pictures and Universal Studios, knew a good story when she heard one. Her response? Stop writing other scripts, and go write this one.

“[The stories about Bader Ginsburg] really struck me, as a female in a male-dominated industry,” Loop says. “You think of Ruth as having this steely legal mind, of always being tough, and being who we see her as now. But she wasn’t always that way.”

Even with Loop’s encouragement, it would take Stiepleman almost a full year to approach his aunt Ruth about the idea. When he finally called Bader Ginsburg in August 2011 to pitch his idea, she agreed, saying, “Well, if that’s how you think you’d like to spend your time.”

From there, it was full speed ahead. Stiepleman spent three months researching his aunt’s life. “I went down to D.C., and she hooked me up with all of her files from the Library of Congress from the ’60s and ’70s,” Stiepleman says. "By day, I would comb through the boxes, and by night, she and I would have dinner together, and we’d talk about what I was learning. We’d talk about her marriage to Uncle Martin. And it was just a great joy, because I kind of knew her [but] I was really getting to know her.”

Then he spent three months writing the script “on a collapsible desk at night after work.”

In February 2012, Stiepleman showed his draft of On the Basis of Sex to Loop, who thought it was ready to shop around Hollywood. The first person Loop brought it to was her former boss, veteran producer Robert Cort, who’d helmed Hollywood blockbusters as well as more niche, character-driven work, including the award-winning HBO movie Something the Lord Made.

As producers, Cort and Loop began searching for financiers. And with Stiepleman, they started the extensive script rewriting process.

In spring 2014, On the Basis of Sex landed on the coveted Black List of the year’s best unproduced scripts.

And then something happened to propel the project forward: The January 2017 Women’s March. In the wake of President Donald Trump’s inauguration, the political and social climate was changing. Loop says she believed it was time to finally make this movie, with the best talent available. “The political landscape had changed, and it felt like we needed to go now. It was the right time. It was the right place. It was always a relevant story, but now this was even more important than it had been before.”

It didn’t hurt that by this time Bader Ginsburg had become a bona fide hero to women and progressives, garnering an epic persona as the “Notorious RBG” and inspiring action figures, albums, books, clothing, and countless internet memes. (The 2018 documentary RBG received rave reviews, distributed by Participant Media, which co-financed On the Basis of Sex.) Oscar-nominated actress Felicity Jones signed on to play Bader Ginsburg. Mimi Leder came on as director, fresh from helming HBO’s hit show The Leftovers. Filming began in fall 2017 in Montreal. 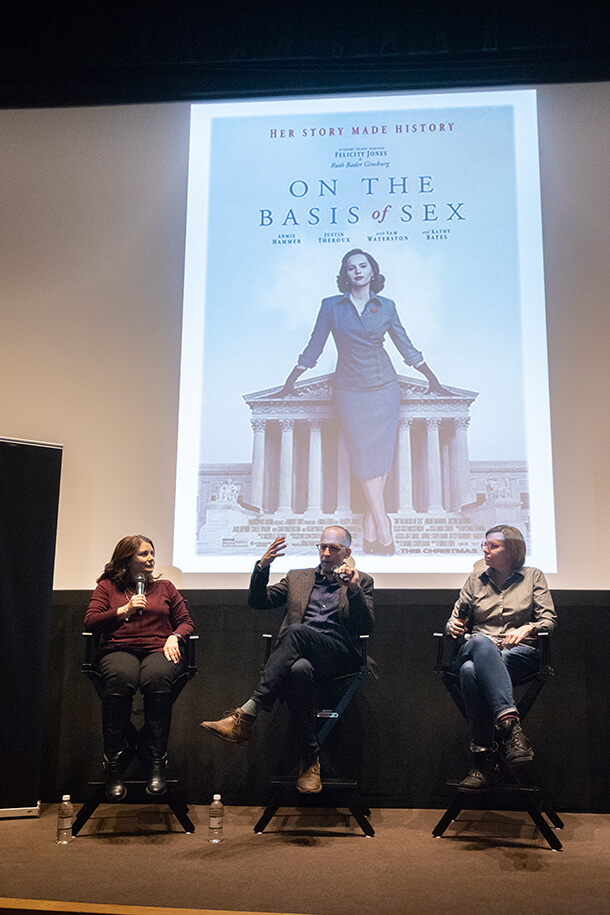 In spring 2014, Stiepleman’s (center) screenplay “On the Basis of Sex” landed on the coveted Black List of the year’s best unproduced scripts. Photo: Daniel Livingstone.

For Loop, who became Columbia’s associate dean of Los Angeles programs in 2017, it’s been a complete professional triumph to take an idea born eight years ago at Columbia from the page all the way to the screen. “My biggest accomplishment was bringing it to Hollywood, to actually get it made,” she says. “To take a script that was written by an unknown writer about [an introvert] … [I’m proud of] the tenacity of pushing it through for six years of trying to get it made.” Loop is credited as one of the film’s executive producers.

Stiepleman is proud that he was able to tell a story from a unique perspective, from inside the family. And he owes it all to the person and place that encouraged him to reignite his creativity.

“My entire career is thanks to Columbia and thanks to Karen Loop, more specifically,” Stiepleman says. “I’m very grateful.”

On the Basis of Sex opened in select theaters on December 25 and was widely released on January 11. The film's release coincides with the 25-year anniversary of Bader Ginsburg’s appointment to the U.S. Supreme Court. Daniel Stiepleman recently completed an adaptation of the YA novel Out of My Mind by Sharon M. Draper and is writing an adaptation of the sci-fi novel Planet of Exile by Ursula K. Le Guin.