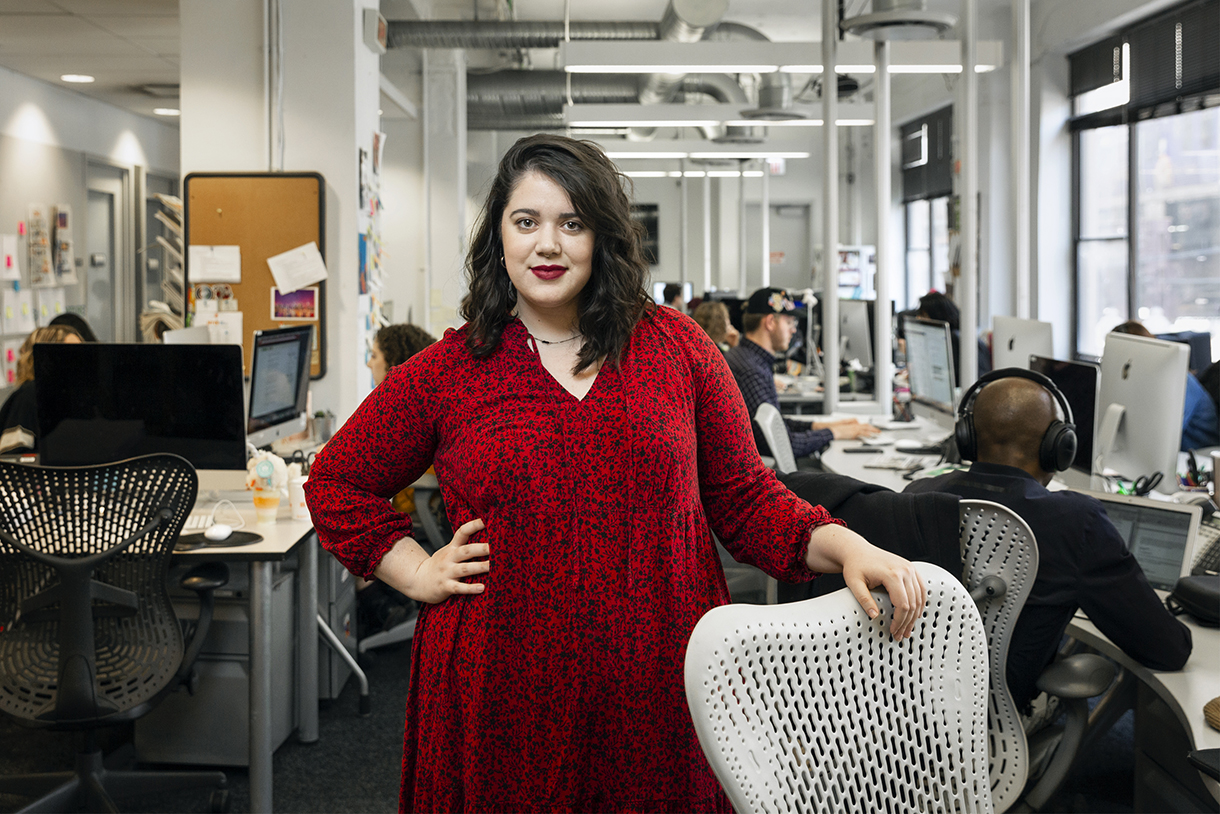 Alexandra Yetter, aged 10, was annoyed. Why wouldn’t her Dad give it a rest? He wouldn’t stop with the journalism thing. Didn’t he understand how much she loved all things fashion? Didn’t he get it?

He may have gotten it better than Alexandra Yetter, now a junior majoring in journalism and Editor-in-Chief at the Columbia Chronicle, ever could have known. When Yetter first chose Columbia, she was certain that she wanted to go into the business of fashion. And once there, it all started to change. Yetter remembers, “My first semester as a freshman I took a fashion business course and then I took an intro to journalism course. And while I was doing the two courses, I would be sitting in my fashion business class just thinking about journalism and writing articles and doing interviews. So, I kind of realized that journalism was the real path that I wanted to [pursue].”

For Yetter, taking full loads of classes and considering a career change was still more sedentary than she liked. She wanted to be out there in the world making changes and writing things people were going to read. By her second semester of Freshman year, Yetter was already making waves as an author’s assistant to Rob Elder. Elder was so impressed with Yetter’s style and work ethic he also gave her an editorial internship for Blockchain news for the summer between her Freshman and Sophomore year.

There was a problem.

Yetter didn’t know anything about Blockchain technology or crypto currency. But this was it—a chance to be published—and Yetter wasn’t about to pass that by. She recalls, “The entire first week before I started my internship, I read every book there was about cryptocurrency and Blockchain technology, podcasts, watched videos, everything. And by the end of the summer, I was practically an expert in it…I knew every creator of every Bitcoin there was.”

By the end of the internship, Yetter didn’t only know everything there was to know about crypto currency-she knew, too, that she wanted to start working for The Chronicle. Yetter also had another internship lined up as an editorial assistant for Mayor Rahm Emanuel’s Press Office. It was fast paced, it was awesome. She still very much enjoyed art, fashion, and culture, though, and thought that working in arts and culture for The Chronicle would allow her to merge her two loves.

She laughs, now, thinking of her best-laid plans: “I hate arts and culture now. I just cannot write it!” Where Yetter found her footing was with Metro, after an impromptu article that only made its way to The Chronicle because Yetter had time to attend a press conference at City Hall of Chicago with then Attorney General Jeff Sessions. She remembers, after the conference, “[I] reported on the story and ran back to a newsroom and had such a reporter’s high from writing this story and cranking it out and having it be on something really important, something that mattered.”

This story had a lasting impact on Yetter, who proudly notes, “From there I became an absolute news junkie. And so I've covered mayoral races, I'm covering the Presidential race right now. Yeah. I became just super into Metro. I kind of found my beats. Now I really want to be a political correspondent.”

Yetter, who has risen through the ranks of The Chronicle from staff reporter, to news editor, to co-editor-in-chief to editor-in-chief, has a nose for news that makes a difference. Recently, she reported on casting controversies in Columbia’s own Theatre Department, her reportage contributing to Chair Carin Silkaitis’ plans for diversifying the Theatre program at Columbia. And she’s been recognized as well: her work is included in Columbia College Chicago’s nineteen 2020 Illinois College Press Association Awards.

When she isn’t writing investigative stories, Yetter is pursuing her goal of becoming a political correspondent. She’s already had plenty of experience and is looking forward to an internship with Bloomberg next summer. As she says, “I've interviewed like Toni Preckwinkle and Lori Lightfoot when they were running for mayor. I've covered Elizabeth Warren and Pete Buttigieg and Joe Biden, just from them being in Chicago. I really wanted to expand on that so I could get as much experience as I can before I graduate and I'm going into this field for the rest of my life.” She is currently pursuing that goal by taking Chair and Associate Professor Suzanne McBride’s Covering Politics Class, where she will continue to refine her skills as a political reporter.

Today, Yetter continues to practice the art of the pivot. Now, due to COVID-19, new hurdles abound in the study of journalism and for student reporters in general. These challenges are twofold: first, how to stay committed to the practice of thorough, unbiased reporting in unchartered territory, and second, how to maintain your own physical and emotional health through challenging times.

Interviewing students, faculty, and parents impacted by COVID-19 can create an emotional toll on reporters that Yetter calls “grueling.” Additionally, with all staffers working at home, the burden to stay current is ever greater. Yetter recalls, “Before campus and Illinois went into lockdown, we had a number of stories in the works…every single piece, no matter the subject, had to have additional reporting or language updates because they were impacted by the coronavirus.” For Yetter, getting those stories right is crucial. As she says, “We all recognize and are repeatedly reminding ourselves that this is an unprecedented time for the world, and we are the only reporters who can capture what this time was like for the Columbia community.”

The standards for reportage at the Chronicle have remained high through this public health crisis—in fact, Yetter’s staff is consistently recognized as leaders in their field. Yetter proudly notes, “We've even won one award and one honorable mention for our coverage in the CCC Awards, which is honoring college coronavirus coverage from the Society of Professional Journalists…it was really nice to be recognized for our efforts since college reporters are often the unsung heroes of the news media.” These heroes are dedicated to unearthing and preserving the unique experiences of Columbia students, faculty, and staff. It is their narratives, their research, and their writing that will, in part, determine how Columbia is remembered during this time.

To others, Yetter has some words of wisdom: “Pay attention and act when you can… If you happen across a potential story, start reporting on it! Then reach out to papers, especially us at the Chronicle, to offer the story as a freelancer. If you're a photographer or a videographer, document what your life is like being stuck at home or going to the grocery store every day, then compile those visuals and send them to a paper for publication!” For in this moment in time it is your voice, telling your experience, that is crucial to reporters telling our story.