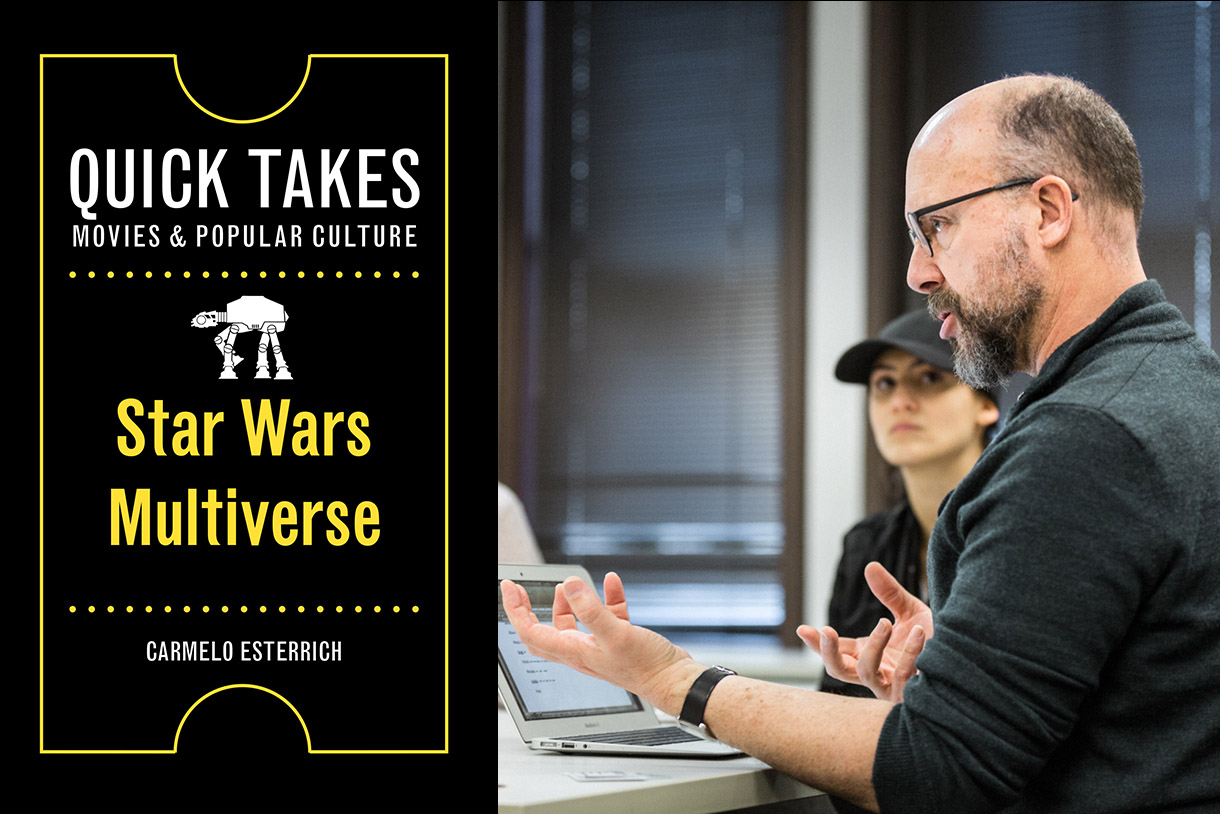 The COVID-19 pandemic has affected everyone differently. For Associate Professor Carmelo Esterrich it meant that he spent most days writing about Star Wars.

It all started in April 2019 at Star Wars Celebration Chicago. Esterrich wanted to use the Celebration as a way to connect with writers and editors to learn more about writing about Star Wars. He quickly realized that there were many fiction writers in attendance, but there wasn’t much on nonfiction. One of his conversations was overheard by a senior editor for DK publishing, who quickly put Esterrich in touch with Rutgers University Press.

Once Esterrich reached out, things started moving quickly. The series editors at Rutgers responded to Esterrich’s email within a day and asked for a full book proposal as soon as possible. A week later, Esterrich submitted the proposal. Heaving a sigh of relief, he and his husband sat down to watch an episode of The Great British Baking Show, and by the end of the episode, Esterrich had his proposal approved. Within 5 weeks of initially reaching out, Esterrich had a signed book contract with Rutgers University Press.

Star Wars Multiverse is part of a series of books that Rutgers University Press called Quick Takes: Movies and Popular Culture. The book covers the entire franchise, not just the movies: comics, novels, television shows, cosplay and even fan film. "All of it, it's Star Wars," says Esterrich, “I don't care what Lucasfilm says or what Disney says. The way that Star Wars is consumed is in this overall world. It's not just what they say it's Star Wars. What I'm doing in the book is a cultural analysis, not of the Star Wars phenomenon, nor of how Star Wars was created, but of the fictional narrative world of Star Wars itself.”  Star Wars Multiverse will be available July 16, 2021 for under $20.

Looking forward, Esterrich will be teaching a Star Wars class beginning the Spring semester 2022. The class will be focused on Star Wars as spectacle, Star Wars as culture, and Star Wars as fandom. It will touch on media studies, cultural studies, cinema studies and a new discipline called participatory culture studies. The course will delve into the idea of Star Wars as a franchise, a profit-making industry, but also as a narrative of identification, how its fans make connections with characters and their stories.

Esterrich was drawn to Columbia College Chicago’s Humanities, History and Social Sciences department because the institution encouraged him to expand his expertise beyond Latin American Studies. Since joining the department over 20 years ago, Esterrich has woven David Bowie, The Odyssey, Mozart’s “Magic Flute” and more into his course material. However, this is the first time he’s writing a book about American popular culture. “The Star Wars book is yet another steppingstone towards this expanding, not only my knowledge, but my thinking about culture. Especially my thinking about popular culture,” said Esterrich.

This isn’t Eterrich’s first foray into publishing. In 2018, Esterrich released a book, Concrete and Countryside: The Urban and the Rural in 1950s Puerto Rican Culture. He helped publicize the book with a reading at The National Museum of Puerto Rican Culture of the Arts in Humboldt Park. “It was just really exciting to be able to share my research with people who remember that historical moment, or who have heard it from parents or grandparents. It was really quite fun,” said Esterrich of the experience.