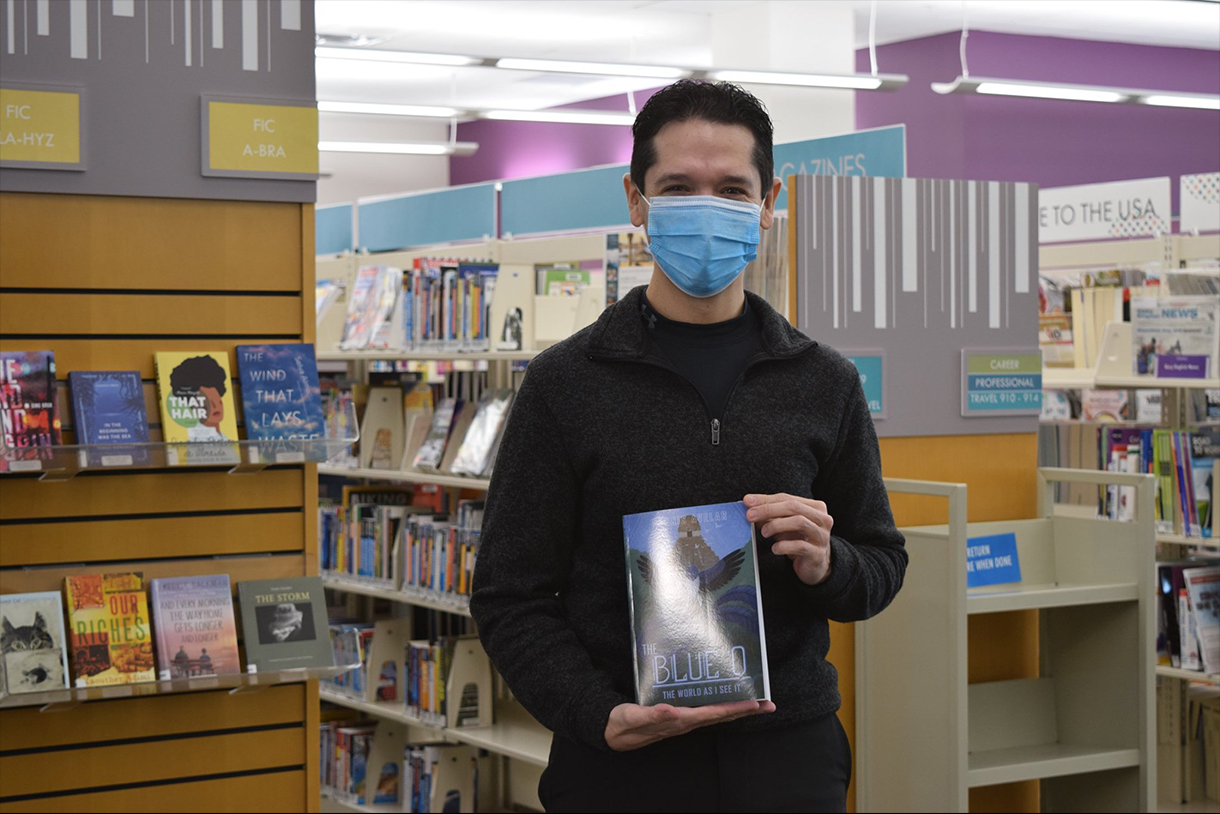 For Dennis Avelar ’05 the path towards self-publishing his first novel, The Blue Q: The World as I See It, started nearly twenty-five years ago.

Avelar has always held a keen interest in conservation, environmental protection, and preserving the earth for future generations. But it wasn’t until he saw a CIA map of world literacy rates while scrolling through Reddit, that the idea for the novel truly coalesced. As Avelar says, “The primary mission of The Blue Q,”a story in which a bird is the protagonist, “is to become a source of motivation and inspiration for readers of all ages—[and] of all nations—to discover the bird within themselves and release their creativity in whichever colors they see best fit.”

The mission of the text is at once to promote literacy, promote environmental awareness and activism, and to inspire action on the part of readers. As Avelar says, “the intent of this work is to help us all understand that we can work together to achieve greatness, even if our own definition leads us down a path we never knew existed.”

Avelar knows firsthand the power and promise of risking the unexpected journey. Avelar is a first generation American, whose parents hail from Guatemala. He was raised in Stone Park, Illinois, where he learned the value of storytelling and the power of blended traditions. He remembers his mother telling him, growing up, “I needed you boys to eat frijoles y platanos as well as hot dogs and cheeseburgers.” It was a metaphor for something greater: Avelar and his brothers were always encouraged to make the most of their experiences in America while retaining their culture and identities.

By the time Avelar was ten, he started writing about things he found engaging or interesting, even home-printing a story about his older brother, Bruno, entitled “My Big Brother.” The descriptions of his experiences and relationship with Bruno were so poignant that Avelar’s father took a copy of the text to work and would read it on especially stressful days. When Avelar found out his father would read his story to find peace after a tough day, he started to realize just how much of an impact simple words can have on the lives of others.

As Avelar continued his education, he spent a significant amount of time experimenting with various styles and forms, including playwriting and screenwriting. In 2002, after graduating from College of DuPage, Avelar was accepted to Columbia College Chicago’s film and video program. While attending school full time, he worked full-time at the Nielsen Company, where he had been employed since 2001. After graduating, Avelar used the technical and business skills he acquired at Columbia to start his own video production company and to continue working freelance as a videographer.

True to his ambitions, Avelar has kept finding new avenues to tell stories, without asking for permission. With The Blue Q, Avelar has taken yet another step down the road less traveled, mining important lessons from his own life, his family’s heritage, and his hopes for a better future.

The Blue Q is available now at Amazon, Google Books, and local booksellers.