CTVA Alum Joseph Mireles on Writing for The Magicians 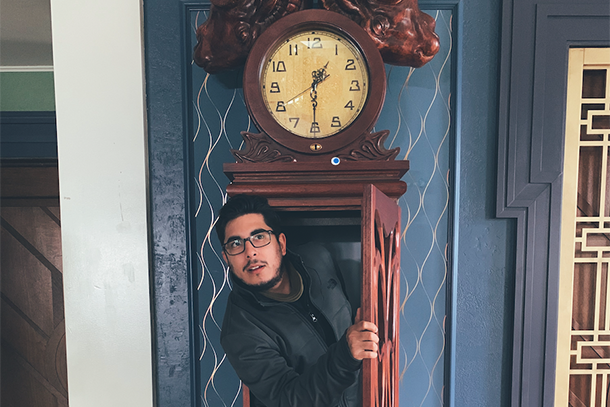 Joseph Mireles and the Fillory Clock from the set of The Magicians
Joseph Mireles went from being a volunteer waiter to being a writer on one of SyFy's most popular shows. Here's how.

Joseph Mireles sat in a driveway in his 1996 Chevy Beretta, hoping that Harold Ramis would get in the car. It wasn’t a kidnapping or anything, he had actually met Harold Ramis, one of his filmmaking heroes, just a couple of minutes before.

Mireles, B.A. ’10, had volunteered to be a waiter at a speaking engagement featuring Ramis in exchange for a ticket. It hadn’t been awful; all he’d had to do was open a couple of bottles here and there. Harold Ramis had turned out to be a really nice guy, admiring of Mireles’ work ethic and dedication. And now one of his heroes was standing in the driveway directly in front of him, as he was getting ready to drive to that very same hero’s film screening.

Mireles rolled down the windows. It seemed to take forever (they were manual). He stuck his head out, a little hesitantly. “Hey!” He said. Harold Ramis looked. “Do you—do you need a ride?” Ramis asked Mireles to wait for a second, went back inside, and then came immediately back out and got in the car.

As Mireles drove, Ramis talked to him about his dreams of becoming a filmmaker and a writer. He said a sentence that sticks in Mireles’ mind even today, over a decade later: “I can tell you’re going to be a great filmmaker and writer.” Ramis told Mireles that if he ever moved to LA, Ramis would connect him with a friend of his, film writer and producer Lee Eisenberg, to help Mireles get his career off the ground.

It wasn’t an empty promise. After finishing a Semester in LA as a part of Cinema and Television Arts programming, Mireles met Eisenberg, who got Mireles his first internship at The Montecito Picture Company. Those kinds of connections, connections borne of the hustle, have characterized Mireles’ career from the start, from when he was only ever working with other Columbia students and, as he says, “not waiting for anyone’s permission” to go out and make movies.

Mireles isn’t afraid of the grind. In the last ten years in LA, he’s interned at companies like The Montecito Picture Company and State Street Pictures, worked as a lone Production Assistant on “Brand: A Second Coming,” a Russel Brand Documentary, was a Set Production Assistant on “House, M.D.” and at Funny or Die, then on “way too many smaller productions to count.” He even worked at post-production houses and at a major public relations firm. Then eventually, he found his way to a position as a Production Office PA, where it all took off, on NBC’s "Aquarius."

In the beginning, the entry level positions were a bit of a shock to the system. As he remembers, “When you leave Columbia it’s like ‘we’re ready to make a move! We have this wonderful education!’ And then you get into the industry and starting from the bottom is a much different ball game, because now you need to master making coffee (Mireles had luckily already worked as a barista in Chicago), being available, and being at the ready to anticipate needs or track down anything and everything [for your employers].”

Realizing that that’s what it took to build the kind of relationships that were important to the industry, Mireles dove right in. He tackled all of his jobs with a dedication and passion that immediately caused his employers to sit up and take notice. In 2014, working as a Production Office PA on "Aquarius," Mireles met famous showrunners Sera Gamble and John McNamara, and one of their non-writing producers, Laurie Lieser. Mireles made a good impression on them.

Gamble, McNamara, and Lieser took notice as Mireles kept working; in 2015, Mireles was hired as the Key Production Office Assistant for “Extant” season two, starring Halle Berry. It was a good gig—and exhausting. Mireles needed a break. He and his girlfriend decided to take some time off and go backpacking through Europe. After their trip, they decided to spend some time in Michigan. Mireles spent his time working odd jobs in the Midwest.

He laughs, remembering the call that brought him back to LA in January of 2016. “I was literally working on a roof when I got a call from Laurie Lieser asking me to be her assistant.” He had a week to get himself off that roof and back to Los Angeles. Pretty suddenly, he was a Producer’s Assistant to Laurie Lieser on "Aquarius" season two, SyFy’s "The Magicians" seasons two and three, and was also working to support the in-house production company run by Lieser, Gamble, and McNamara.

While on Lieser’s desk, he got to know Gamble really well. As he says of Gamble, it was nearly an instant realization of “Oh my God, I have so much respect for this person, I want to work that much harder for her. She’s a powerhouse.”

Geography helped everything fall into place. Mireles says, “'The Magicians' writers’ office is at Raleigh Studios and the "YOU" writers’ office was intentionally set at Paramount across the street… Sera and myself were just constantly walking or driving the golf cart back and forth across Melrose and the Paramount lot, between the different writers rooms on different studio lots to run both shows.” He got to know everyone very well. He kept working hard.

Things didn’t happen immediately, but, as Mireles recalls, “After a year as a Showrunner's Assistant, Sera and John saw fit to promote me to Writer's Assistant for "The Magicians" season five, where they were also gracious enough to hire me to co-write episode 512 with John and another of our writers, Elle Lipson.” And, for Mireles, this is just the start.

Moving forward, he is excited to continue writing and working on "The Magicians." He also looks forward to continuing to make independent films with SiLA alumni in Los Angeles. It’s a solid group. “We’re going to do what we love and if we pour enough of our heart, soul, pain, and joy into it, it’ll resonate with whoever watches.” It’s been a good strategy so far, with many members of this cohort landing in successful positions. He’s not surprised by the outcome. He says of LA, after all, “People are always looking for new talent here.”