DJ Niéna Drake Rocks the Hustle: On Success, Making it, and Mentorship 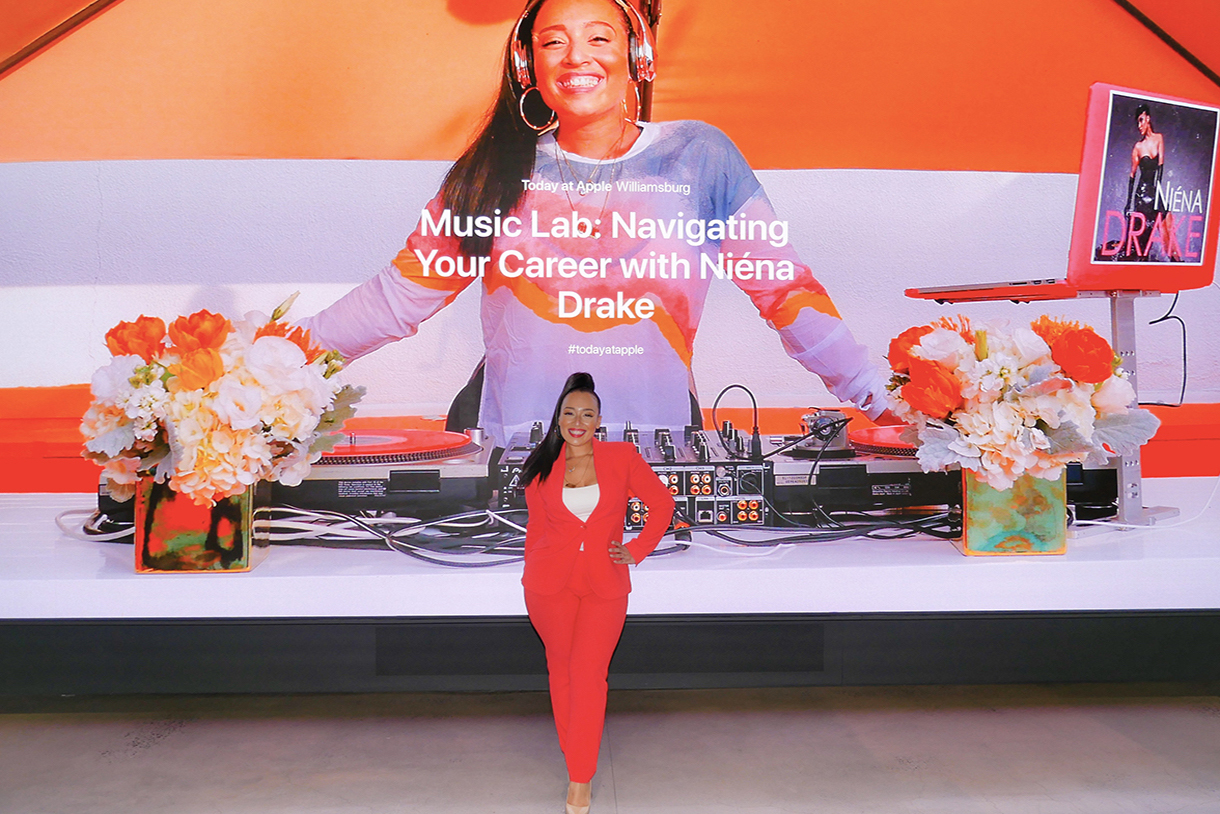 Alum Niéna Drake discusses her path from Columbia to succeeding in media, art, and the world of DJing.

Niéna Drake, B.A., Journalism ’02, was livid. She may have been young, but she was a good field producer and she knew the difference between right and wrong.

There had been a gang shootout in one of Chicago’s most dangerous neighborhoods, and Drake had been sent as a field producer for Fox Television Stations to cover it. Coming from a neighborhood where shootouts weren’t unheard of, Drake approached the situation with sensitivity.

In this case, a young woman from a school had gotten hit. Drake went to the hospital to speak to her family. She recalls, “I wanted to have one of her family members speak on the fact that this not only impacts those people that [gangs] are fighting with, but the neighborhood, the kids, the elderly…the entire community as a whole.”

The woman’s family agreed. Drake remembers, “I got a sound bite from one of her relatives who was actually a teacher at the school. I sent the video back to the station and I told them clearly, I said, ‘You have to blur out her jacket, because she’s a teacher.’ I said, ‘Blur her face and the name of the school out.’”

Drake went back to the station, exhausted, but knowing that she was telling an important story. She walked, in, looked up, and it was the top story. Even today, you can hear the disappointment in her voice when she remembers it. “You could see her face clearly. And the jacket.”

Not about to let it drop, Drake turned to her team and asked them for an explanation. It wasn’t forthcoming. A coworker turned to her and said, “She knew what she was doing.” That did it. Drake turned, looked him in the eye, and said, “No she didn’t. I did us a favor, but next time you ask me to go get a sound bite from someone who’s life we’re going to put in danger, I will not go do it.”

For Drake, the strength, certainty, and moral center of her work started early, when she took classes at Columbia in high school through a program with the Emma Bowen Foundation, of which she is now the director. But when she started out, even as she sampled classes at local community colleges and fielded interest from many institutions, Drake knew that she wanted to pursue her interests at Columbia. She says, “There was a sense of hustle and focus that a lot of the students had, specifically when it came to getting work.”

Drake dove in. It wasn’t a straight line for her to a degree in Broadcast Journalism and Media Management—she took classes in all of her areas of interest-television, fashion, and music business management as well. For Drake, it has always been about the mix of fun and making it. She laughs, remembering “I believe I told my mom when I was younger that I wanted to be a money banker…I didn’t know what that was! I was just like, ‘I like money, and I want to have fun making it!’”

Luckily, Drake found a community at Columbia that was supportive of her desire to become financially and creatively successful. She says, “Once I started getting my hands into things, and Columbia really supported that. I felt like it wasn't about us waiting until we graduated to do something. We were doing while we were in school, and I think that that helped me get into it.” She goes on, “Columbia changed my life on so many levels… [at Columbia, I made] lifelong relationships that I'm just super thankful for.”

After graduation she started working with Fox. She says, “I was the first producer to put Kanye, Common, Twista, all those really big Chicago artists on television in Chicago.” With an eye for future talent and a willingness to work hard, Drake soon started receiving recognition for her hard work, with, as she says, “I believe it was 13 or 14?” Emmy nominations. And, of course, an Emmy win for the collection of stories about the societal pressures that sometimes cause Asian women to alter their appearance.

As recognition flowed in, Drake continued to rise. Her client list grew to include iHeartRadio, Nike, WBEZ, POPSUGAR, CBS, Entertainment Tonight, and Complex Networks. Personally, Drake has worked with everyone: Don Cheadle, Matt Damon, First Lady Michelle Obama, Derek Rose (and many others)…and she has no intention of slowing down.

Today, however, Drake is focused on Columbia students. She was recently voted onto the national alumni board, and looks forward, in the near future to supporting Columbia students they way she was supported as a student. She says, “I’m excited to be on the board and excited to meet new prospective students and help the students that are already enrolled and give them some sort of guidance and mentorship… I'm proud to be an alum, and I'm super excited to help the board do the work that they've been doing and will continue to do to help the school…I'm really honored and really thankful to the entire board for welcoming me and making me a part of it. It's a great time in my life to help and I'm just so excited. I'm just so excited.”