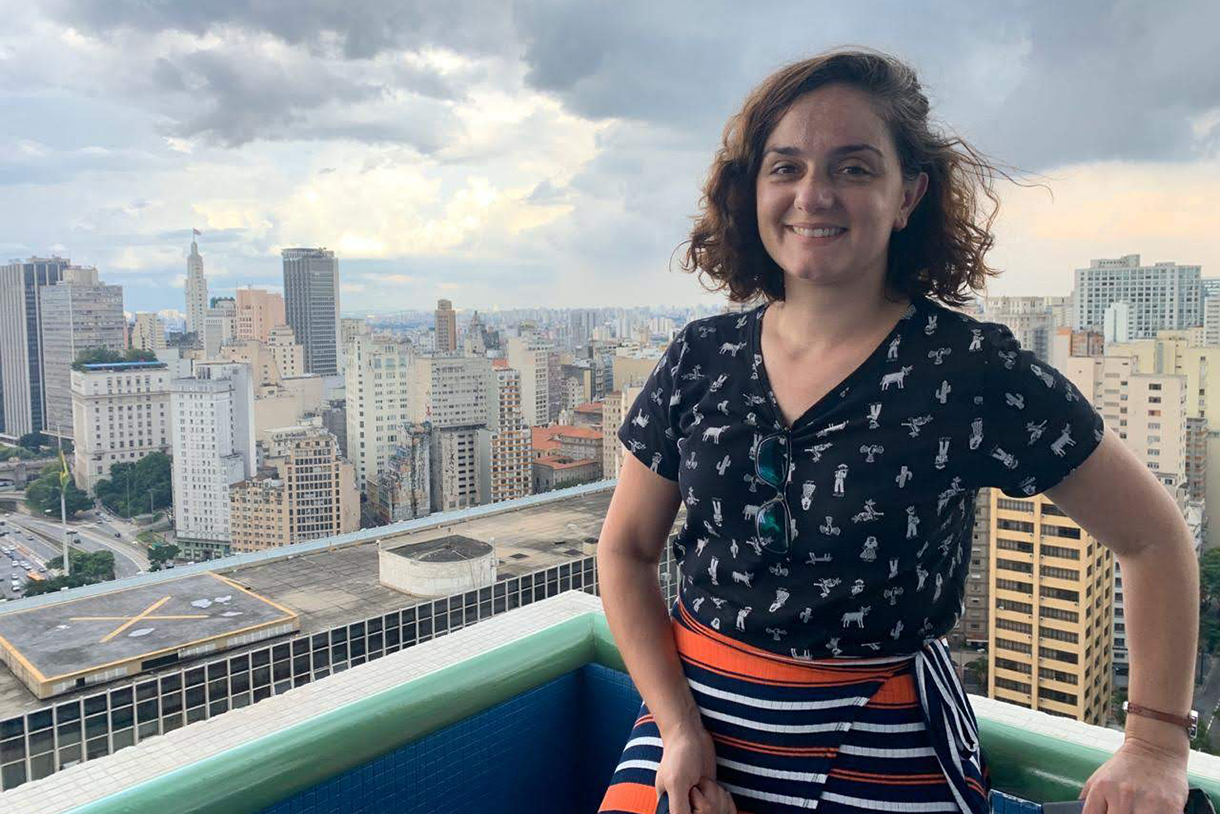 Juliana Ravelli MFA ’21 had her work published for the first time when she was just five years old. One of Ravelli’s poems and a drawing were included on the back cover of an educationalist’s book. Since then, Ravelli has been a ballerina, ballet teacher, a journalist, and is now following her dream of becoming a writer.

Here Ravelli shares more information on her background, her recent successes, and her time at Columbia:

Can you give me background on you, your story, and what drove you to this point in your life? When did you know you wanted to become a writer?

That is a big question (haha), especially to Brazilians who like to explain everything (I mean everything). I’ll try to be objective (I’ve been learning about it with Americans -- Haha).

But, before that, I worked as a journalist in newsrooms for about ten years, first in a regional newspaper in the São Paulo metropolitan area, later in a national newspaper in São Paulo. I also have a big background in dance. I studied ballet for more than 20 years and I taught ballet for 13 years.

Honestly, I never really thought I would become a writer back home. I come from a Brazilian working-class family. I’m a first-generation college student in my family. I actually was able to go to college -- two years after graduating in high school -- only because of a federal program that paid for half of my tuition (in my last year of college I was able to get a full scholarship).

But I’ve been writing since I was a little kid. I wrote a poem and made a drawing when I was 5 that became the back cover of an educationalist’s book in my city (unfortunately, I don’t have any copies of this book). And although my parents don’t have many years of formal education, they always encouraged me to read and write -- education is a priority for them. When I was 7, I made another drawing in first grade saying, “what I would like to be when I grew up.” I drew two things: a “poetess” and a “ballerina.” I guess I decided at a really young age who I wanted to be: an artist. But I forgot (or gave up) that as I grew up. At elementary and high school, I heard from teachers that I would become a writer someday.  When they said that, I used to think, “Yes, sure... Uh-huh.” As a kid of a working-class family my main goal was to have a career, a good job, so I could pay my bills, buy a house, and someday -- with luck -- travel to other countries. I knew that being an artist in Brazil (and even nowadays it's like that) was not a very compatible dream with having financial stability -- not for me, at least. But the thing is that being an artist was a huge, profound desire -- stronger than anything. I just didn’t know I would have to move to another country to become one.

When the time to choose a college course came (in Brazil we don’t have majors or minors; our undergrad courses are entirely around a discipline we choose when we apply), I decided I would study Journalism because I really liked to read and write and I could have a more stable career. In Brazil, we don’t have undergrad courses in Creative Writing; we now have very few graduate courses in this area.

Then how did I end up in an MFA in Creative Writing in the U.S.? Sometimes I just can’t believe I’m here, but most of the time I feel I’m in the exact place I should be. I’m here because of a mixture of hard work (not only mine, but also my family’s), opportunities, a profound desire, and luck.

How did you get involved with Story Studio?

I believe StoryStudio asked the English and Creative Writing Department at Columbia College for a nomination for the Stories Matter Foundation Masters Award. I’m not sure if one person or the department nominated me. What I know is that I received an email last year from StoryStudio saying that I was one of the recipients of the Stories Matter Foundation Masters Award -- which was a shock, really.

How did it feel to be awarded the Stories Matter Foundation Masters Award? Did you have to submit a story for consideration? If so, what was it about?

I was shocked. I never thought I could receive an award in the U.S. -- at least not now, as a student. I was also very moved and honored and happy and grateful. This award means a lot to me! It showed me that I might be on the right path.

I didn’t have to submit a piece for consideration. As I said, someone -- to whom I’m very grateful -- nominated me. But at the award event I read an excerpt of an essay that I wrote called “With Love, to the Sertão das Gerais” about the migration of my father in Brazil, my family, the Cerrado (one of the Brazilian biomes), and one of the masterpieces of Brazilian Literature, Grande Sertão: Veredas by João Guimarães Rosa.

Has winning the Stories Matter Foundation Masters Award helped you over the past year? If so, how?

For sure! It helped me a lot for many reasons!

Receiving the Stories Matter Foundation Masters Award made me understand that my voice is also important, that people in this country can be interested in what I have to say. The award included scholarships to attend a master class with the author Sarah Weinman and the StoryStudio Chicago Writers Festival, where I was able to meet other writers, learn from wonderful people that have a huge experience in the industry, and talk to authors that I really admire, like Megan Stielstra, Rebecca Makkai, and Garth Greenwell. During the festival I understood what I need to do in order to make a career in writing. The award and all the opportunities that came alongside it also made me feel that I belong to a community (even communities, in the plural) here in Chicago. And this is something huge, really precious for me and anyone who comes from another country. For the first two years living in the U.S. I struggled immensely with belonging. The award was a turning point for me because it showed me that I was already part of this city.

Have you won any other scholarships or awards for your writing?

Two of my essays were published. One of them by the Kweli Journal, and another one by the Sobotka Literary Magazine. This summer I received a scholarship to attend three master classes in the Kweli International Literary Festival with Mik Awake, Nadia Owusu, and Jaquira Díaz. And on September 25 I presented that essay (“With Love, to the Sertão das Gerais”) in the Fuego y Leña // Slow Burn: Food, Justice, and Sovereignty in the Americas Virtual Conference organized by the Latin American Studies Center (LASC) at the University of Maryland.

How has your time at Columbia College help you become a better writer?

My professors, my colleagues, and my classes at Columbia College showed me that I could become a writer. Many, many times people here believed in me more than I did myself. I never really thought I could be a writer. It is really difficult to be here in this country. It is really difficult to pay for my MFA (even with my assistantship, to which I’m deeply grateful). But I’ll never forget the day in a Nonfiction Workshop class in the Spring, right before the pandemic started. I was seated on a chair, I looked around the classroom, and I had to do my best to not cry in front of everybody because at that moment I had this profound feeling that, in spite of all hardships, I was in the best place I could be.

Here at Columbia College I’ve been supported and challenged by my wonderful professors and my peers. And to be here is huge not only for me. It is huge for my whole family back home. No one in my family had ever had the opportunity to do graduate studies abroad. I heard from a brilliant student of mine (I’m a Writing and Rhetoric instructor here at Columbia College) that she was here for the ones who preceded her and for the ones who will come after her. I cried when she told me that because it is the same for me. And that is why I don’t take my education and opportunities for granted.

Would you advise a prospective student to attend Columbia College, and if so, why?

And it was at Columbia College that I realized I could be who I really wanted. Of course, I have to work hard for that, but I was never afraid of working hard.

I have three main pieces of advice: First, build a community with your colleagues and professors and look for other artistic communities in Chicago (there are a lot of them in the city)! Second, attend all kinds of artistic events as much as possible. It doesn't need to be only in your major. Try to be open to all kinds of artistic expressions; you never know what can inspire you to create something great. Columbia College has a lot of great events in all departments and is always bringing great people from the industry to talk to students. I know that the pandemic has been making everything more difficult, but I also know that many people at Columbia College are doing their best to foster online events that will give us a sense of community even during this really hard time. And finally, don't keep your work for yourself, in a drawer. Don't be afraid to show your work to other people. Put your work out there! We all need to hear your voice! And use your community to support you in this endeavor!