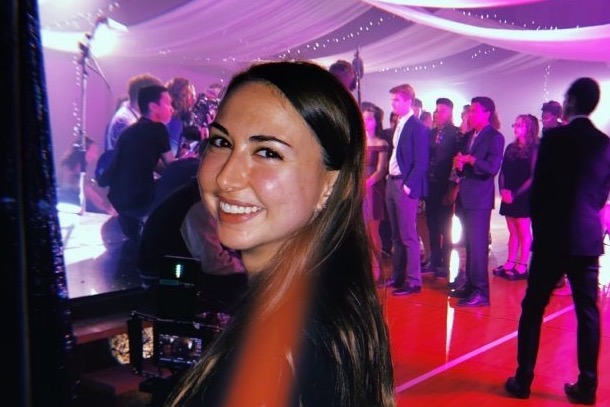 Sydne Horton’s parents were respectfully not going to do the truffle shuffle. Not again. It wasn’t that they didn’t like “The Goonies.” In fact, they thought it was great that their daughter appreciated the cult classic comedy. But the tenth time over, it was getting to be a bit much. Why would anyone watch a movie so many times? Especially that movie?

For Horton, though, it wasn’t just about the jokes or the characters. As she says, “I realized that I wasn't just watching it because I enjoyed it, but I was actually analyzing everything in the frame. So, I was getting a different experience every time I watched it.”

For the aspiring director, exposure to movies, television, and art of all sorts was inspiration. From the age of 12, Horton was telling her teachers that she wanted to be a film director and spent her spare time shooting things with the video camera her parents gave her for Christmas. With that camera Horton shot what she describes now as “really bad home-video-style films with friends” and learned to edit on iMovie. All the while, she was reading biographies of people she admired and working with like-minded friends.

Horton was drawn to Columbia particularly due to the opportunity to participate in Semester in LA programming with the department of Cinema and Television Arts. She remembers having to decide between a school like Columbia or a school in a larger market, like Los Angeles or New York. She remembers ultimately deciding on Columbia because it was a “smaller school where I would get more hands-on experience with teachers.”

In Cinema and Television Arts, Horton connected with Adjunct Instructor Tracy Fetterolf, Associate Professor Sharon Ross, and Associate Professor Emerita Sarah Livingston, all women who challenged Horton to show up as her best self in and outside the classroom. For Horton, building relationships with instructors and professors who were dedicated to her success paved the way for a smooth transition to Los Angeles during the summer after her sophomore year, where she completed the Television Academy internship.

After returning to Chicago, Horton realized that she wanted to keep the connections that she’d built over that summer, so she threw herself into high gear and graduated in three years, instead of four. Once back in Los Angeles, she was immediately hired as a Production Intern at Blumhouse Productions, known for producing popular horror films “Paranormal Activity,” “The Purge,” and “Get Out.”

Horton’s drive, passion, and skills soon set her apart, with connections she made on that job almost immediately leading to a Unit Production Managing gig for an independent feature film. Her bosses at Blumhouse liked her so much, though, that after that film wrapped, she was offered a promotion to come back to Blumhouse. Now an Office PA, Horton quickly moved up to the temp executive assistant role, a role that would have been hers permanently if a production opportunity with Nickelodeon hadn’t opened up for a show called “Nicky, Ricky, Dicky, and Dawn” and then, from her success on that, to another Nickelodeon show called “Knight Squad.” Not slowing down, Horton was then tapped to work in props on a Ryan Murphy Netflix show called “Hollywood.” And now, she’s at the beginning of a run on another Ryan Murphy show, also working props on season three of “American Crime Story.”

It’s almost hard to keep up with Horton’s successes, successes due to her ability to maneuver into positions and deliver exactly what’s needed at any given moment. While Horton was working her way up in various production roles she was also independently directing and producing her own work. Her first short film out of college, “Flicker,” premiered at the LA Shorts film festival, and her newest project, “Meta,” is currently wrapping in post-production.

When it comes to her own work, Horton is dedicated to stories that foster social change. An activist and member of the LGBTQIA+ community, Horton describes how the personal and political have intersected in her work life. In “Meta,” the story follows Artie, a transgender teen who’s been nominated for prom king. Just moments before making his way to stage for prom court announcements he unexpectedly gets his period. Horton says, “With this film we had the opportunity to not only shed a much needed light on the trans experience and further explore trans dysphoria, but we managed to go even deeper into the psychological turmoil the human psyche takes us through when our sense of being is out of place and our anxiety is at its highest. “Meta” has been a personally important piece to spearhead due to the weight it carries for my writer, who, through the process of the film’s lifespan, has been transitioning as well.” For Horton, it’s about highlighting visibility, telling stories that matter, and emphasizing the human connection to every piece she brings to the screen.

In the end, Horton credits her time at Columbia with a lot, and doesn’t hesitate to recommend it to prospective students. She says, “If you build those connections with your professors, it's going to be a school that gives you the best hands on experience and gives you mentors that want to help you achieve your dreams, however they can.”