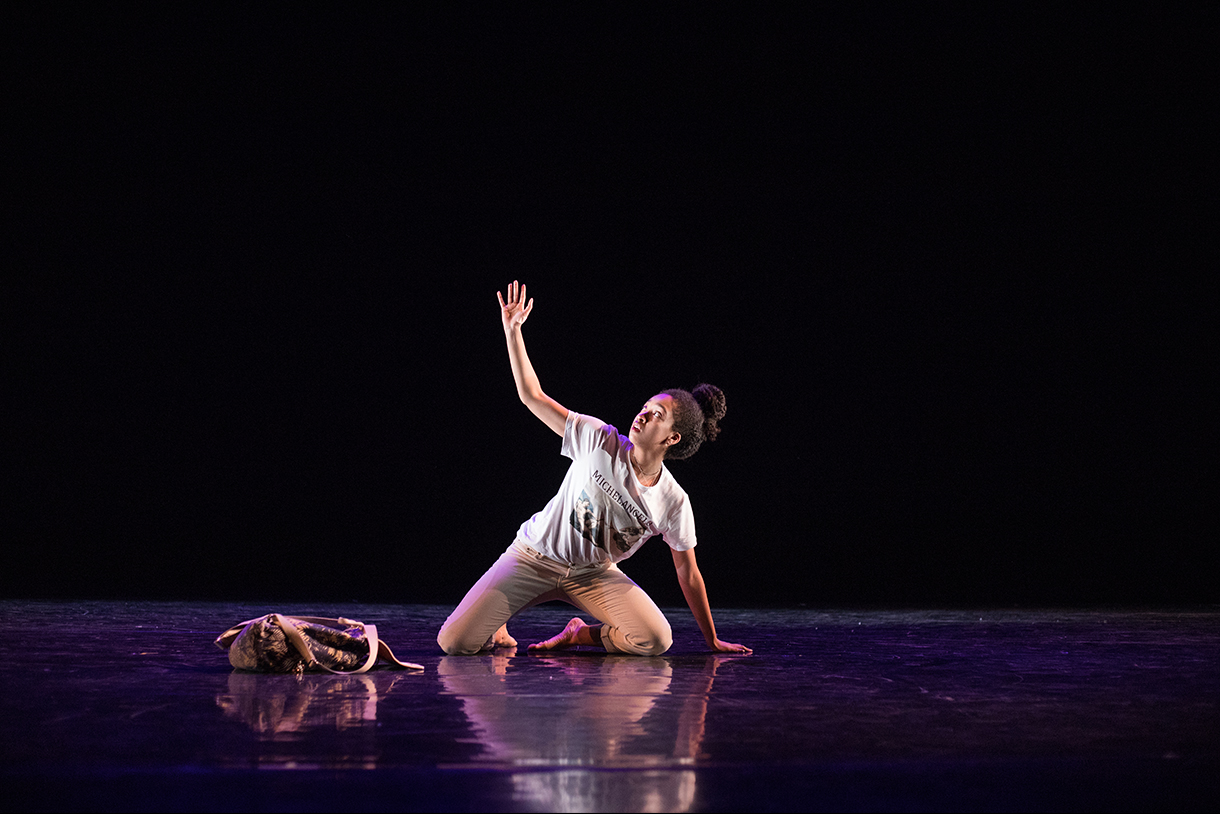 Kennedy Ward
Dance student Kennedy Ward tells us how an art camp and a fateful invitation to Links Hall brought her to Columbia.

As a child, Kennedy Alexandria Ward enrolled in an art camp for kids at Columbia College Chicago. Little did she know that years later she would be enrolled in the school’s BFA Dance program.

“For as long as I can remember, I’ve been dancing and moving, which is fun to say because who hasn't, but the way I was learning was very non-traditional because accessibility to studio dance is ludicrously inept on the South and West sides of Chicago,” she says. “So, I was accessing culture by learning dances from my neighborhood friends, or at block parties, or in our kitchen after dinner. And that scholarship continued individually, and I assumed that that was how my life was going to be—bookworm by day and athlete/dancer by night.”

When Kennedy and her siblings moved to the suburbs with her mom during elementary school, she tried various sports and organized activities, but felt like an outsider. “I went from openly enjoying and participating in dance and sports in a less traditional way in Chicago to feeling kept out of those activities in the suburbs because I hadn't been on a little league team or taken dance classes when I was five. It was very much like an episode of the ‘Twilight Zone,’” she says. “I was informal, strong, and very silent, and it felt like I would never find the community that would see me as knowing.”

The real turning point came when she decided to take Dance and to run track in high school. Her dance class was full of girls who had been dancing for years, but she felt more at ease with them. After high school she enrolled at College of DuPage. Once there, she decided to sign up for the track team. While in the school’s athletics building, she ran into a dance studio. She signed up for ballet.

Eventually, her ballet instructor Elise Cowin invited her to a performance at Links Hall. Kennedy found the performance to be inspirational. “The performance left me speechless, it was like being shaken awake. It was so energizing and permanent. And from that day, I decided ‘this is the only way I want to be.’ And it feels like it's only been a moment between then and now and I’m now a senior pursuing a career in dance.”

That performance at Links Hall featured several Columbia alums. “I just had to see what this program was since it was making such incredible performers,” she says. That and the fact that Kennedy was already familiar with Columbia after having attended an art camp at the school, helped her make the choice to enroll at Columbia. “My siblings and I were enrolled in Columbia's art camp for kids when we were younger and that program really stuck with me,” she says.

Her first years at Columbia were a learning curve. “My first two years involved so much experimentation and consequences and just a general struggle to find a niche I could feel comfortable in that I doubted the process and the outcome heavily, but I wasn't struggling alone,” she says. “The amount of guidance, freedom, and compassion that I found in the Dance Center is so rare. I could talk about how much I love the dance department faculty all day. I credit so much of my growth and process to them.”

When asked about some of her favorite projects, Kennedy mentions ‘Under My Roof,’ a project she choreographed in 2019. “That was the first time I effectively created a mood and a type of heaviness in the theatre,” she says. “The dancers I was working with were very receptive and communicative during the process, so it was very educational for all parties.” Currently she is working on her senior capstone, some archival projects with Columbia alums, and an art club she plans to start.

Kennedy gives the following advice for students looking to pursue Dance: “Lean on faculty—they know so much and are so kind and human. Art and dance are so precarious, but don't let that stop you. Look at the face of all that you want to do in the world and be courageous enough to do it anyway because failure can also be a reward.”

Although she’s learned a lot at Columbia, she admits to still experiencing a few bumps in the road. However, she embraces this and references the Japanese philosophy wabi-sabi, the art of embracing the imperfect. “There are absolutely still bumps, but digging into and getting mussed and tousled with the things I care about is perhaps my greatest achievement,” she says.