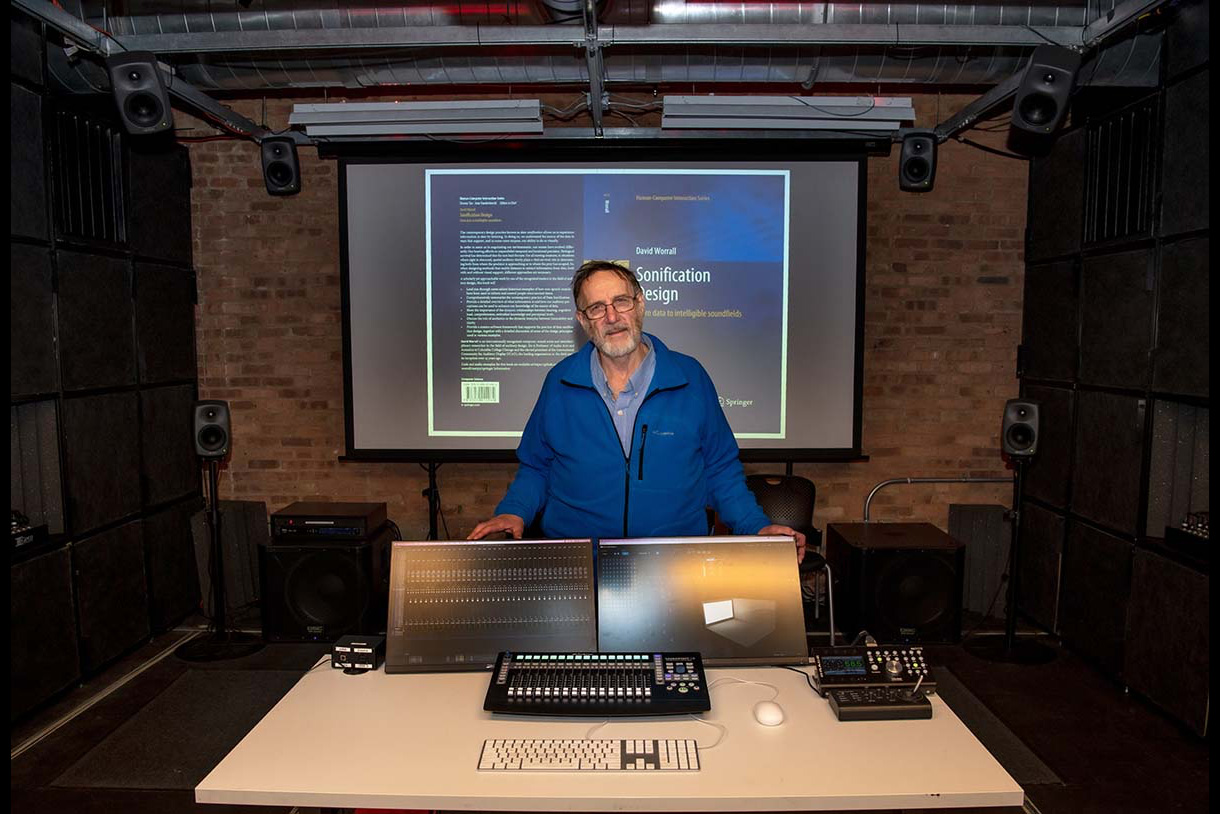 Sound, and the study of it, offers opportunities to create art, unlock vital information, and provide valuable tools to improve quality of life. As a composer, sound artist, researcher, and educator, Professor David Worrall brings both the art and science of sound together to engage and entertain; to solve problems; and to prepare Audio Arts and Acoustics (AAA) students for career opportunities that they didn’t even know existed.

Worrall began his professional journey as a music composer, transitioning from the more traditional models of composing to using computers to create and perform music long before the days of Macs and PCs.

“While I was at Sydney University as an undergraduate student, there was one computer in the whole of the campus, and it was in the physics department and it didn't have sound or a screen or anything; it was a basic punch card interface,” he recalls. “So, I would code to make calculations, translate those into a score, and have an instrumental group play it.”

His interests in computers and music evolved into electronic music, eventually setting up the first electronic music studio at Sydney University and publicly performing his compositions without traditional instruments.

Worrall parlayed his expertise in sound and data-mapping via computers into an academic career as an instructor and researcher, working in his native Australia as well as Germany, Austria, Spain, and the U.S.

As a researcher he tackled problems in health care and even the car industry. For example, through data-mapping and an auditory display technique that is known as sonification, he joined forces with health care providers to collect, condense, and translate heart data from patients with suspected sleep apnea into a time-saving audio diagnostic tool for doctors.

“The heart is a good measure of the apnea even though apnea is a breathing problem, because it needs to working harder when the body needs more oxygen,” he says. “By integrating the data over a long period of time and then compressing it into a very short period of time, a doctor can listen to that data set and, with some training, understand the nature of the sleep apnea.”

In the auto industry, he tried to tackle problems related to differences in how cars sound, such as the rhythm of turn signals and the tone of alerts triggered when vehicles get too close. A Honda Pilot, after all, does not sound the same as a Ford Explorer. And yet, an individual may drive both cars on any given day. Not recognizing the subtle differences in the vehicles’ alert systems could be dangerous. To promote safety, Worrall worked on a system that would allow drivers to move from one car to another with a singular sound system tailored to them individually.

Throughout his career, Worrall has remained an artist, diving into the world of polymedia. He has created interactive sound experiences with portable domes that house specialized sounds using a multi-channel sound systems. People can walk through the domes, or they can move around inside them, gesturing or engaging with microphones to make sounds. “Sounds interact with sounds, so it’s like a feedback system,” he says. “Listeners can interpret what they experience in whatever ways they might choose, depending on maybe their cultural background or their age or something else.”

Worrall came to Columbia College Chicago nearly six years ago to help reimagine the Audio Arts and Acoustics department as its chair. During his time in that role, he helped marry the art with the science of sound in the department’s curriculum and help shape the department into what it is today: a technologically advanced learning environment for sound creatives. He went on to focus on teaching at Columbia. And it’s in Columbia’s classrooms and audio lab spaces where you’ll find him today teaching courses such as audio programming and an advanced practicum in sound art.

He believes Columbia’s AAA department gives students skill sets for careers they may never have imagined when they first walked through Columbia’s doors. “Be prepared to be transformed,” he tells future students. Sound mixing is just one career avenue; Worrall wants to see his Columbia students explore all sorts of opportunities, and points to two of his former students from previous institutions as examples: one who went on to work in Animation in the movie industry and an another who monitors emotional content of Twitter hashtags.

“I’m trying to encourage students to set goals but not be confined by them,” he says. “It’s necessary to have goals in order to move, and you can’t know if you’re headed in the wrong or right direction if you’re not moving."