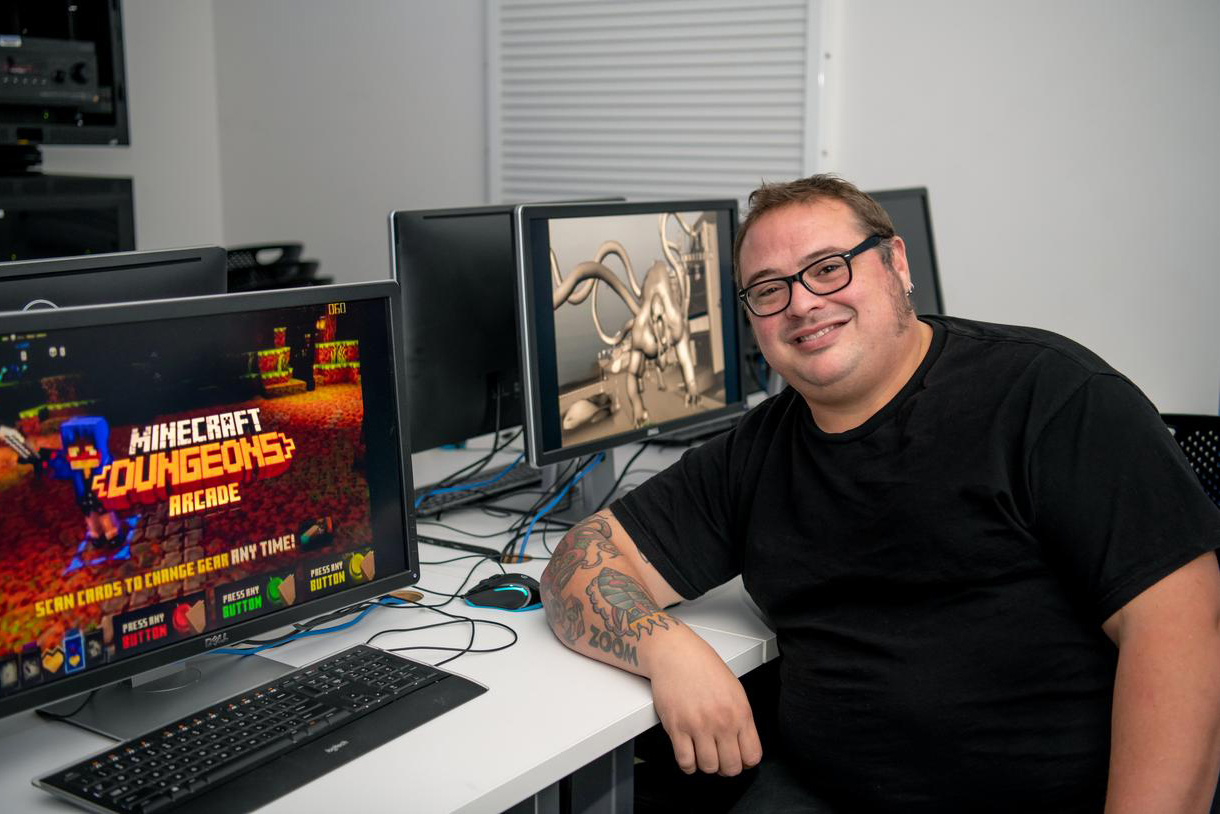 New full-time faculty member John Losacco worked as an arcade game animator for years before realizing that teaching animation could be just as fun.

“I was always the animation nerd,” says John Losacco, assistant professor in Interactive Arts and Media at Columbia. “I was in punk bands in high school, and I was in the artists groups,” he recalls. “But when my friends would come over to my house, they’d see Lion King posters.”

But despite his love for animation, he didn’t consider it as a career choice until his senior year of high school. The barrier: He didn’t think he could draw. “I thought if you can’t draw, you can’t animate,” he says. “And I remember seeing Toy Story and thinking ‘Well, you have to be a 2D animator before you can do that.”

Another barrier: He didn’t realize you could study animation in college. Growing up in Streamwood, Illinois, Losacco knew little about the art world and didn’t consider animation as a major until a friend suggested it. Initially, he questioned whether that possibility was even real, but he soon found out it was. And just like that, he dropped all other plans and went to college at The Art Institutes to study animation. “I never looked back.”

More focused on music than animating in high school, Losacco had some catching up to do once he arrived at college. “That was a struggle. And then I just kept at it; I was really persistent,” he says.

Even with school, though, he felt there was more to learn. He started calling studios, such as Calabash Animation and High Voltage Software, and got advice directly from them. Feeling his animation reel wasn't good enough, he ultimately went into web design after college to pay the bills.

“And just through a bit of happenstance, I found a link to Animation Mentor,” he says.

Then new, Animation Mentor offered an online certificate program with classes taught by animators from Disney and Pixar who worked during the day and trained animators at night. The experience was transformative. Thanks to them, he developed a reel that led to interviews and job offers. He was hired by Play Mechanix, which designs and develops arcade-based games, stayed 14 years, and created animations for games like “Big Buck Hunter” and “Terminator Salvation.”

How did he get to be a successful animator without being the best at drawing? It’s all about posing he says. “Everything we do in animation is meant to be something appealing and our job is to make it interesting to look at,” he says. “Poses mean good silhouettes, which means the outline looks good; it's clear the audience understands what's happening.” And through posing characters express personality traits. “And so when I ask my students, how do you convey a confident walk, a character that's very confident when they're walking? They'll draw me a pose.” he says.

Losacco encourages those who understand motion or have a passion for what motion is and what acting is, to consider a career in animation. “I think this might be the career for you,” he says.

And while it was the right career for Losacco for years, he soon went from being a professional animator to teaching future ones.

During his tenure at Play Mechanix, he befriended another animator who at the time taught at The Art Institutes. He asked Losacco if he had an interest in teaching, and Losacco initially said no. The friend proved persistent, inviting Losacco to guest lecture. His friend later came to Columbia as Game Art Coordinator, and with his encouragement, Losacco eventually came to Columbia as an adjunct faculty member. His students’ enthusiasm for animation proved to be contagious and Losacco found the experience rejuvenating.