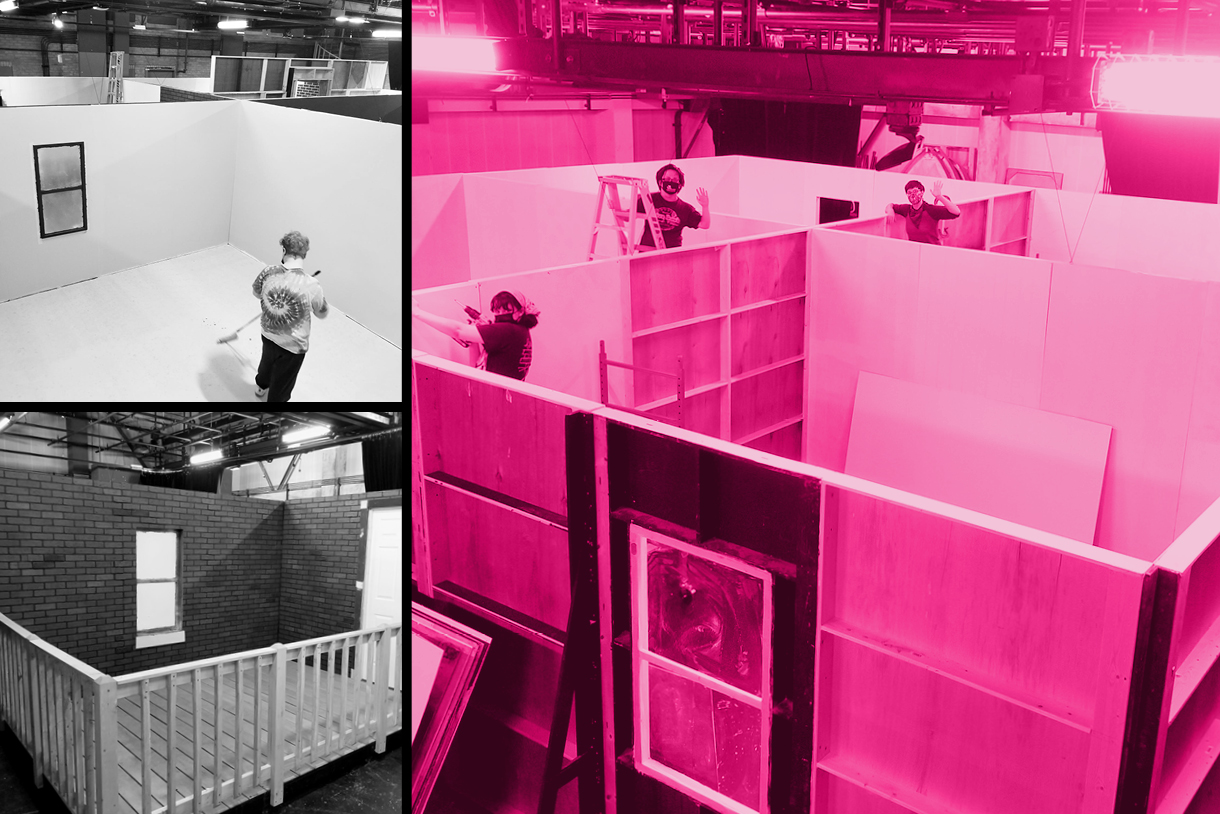 With the COVID-19 global pandemic upturning the way we live, work, learn, and experience entertainment, it is no surprise that we continue to come up with creative ways to keep a sense of normalcy. The world of performing arts is no different. While some colleges and universities have stopped producing new performances, Columbia College Chicago’s Theatre Department has added something new to their toolbox—acting pods. As the popular saying goes, “The show must go on!”

The pods introduced by Columbia’s Theatre Department are actual physical pods (not to be confused with the reference to working with the same small group of people in the age of COVID-19). The pods are built like small rooms—they are four-sided, can be painted, and have set pieces and furniture in them.

Trying to address students’ needs in performance, Theatre Department faculty realized that having them perform over Zoom at home does not allow them to have much interaction with each other and it was difficult for set design students to design. The department came up with the idea of building “Zoom rooms”—acting pods on campus that one unmasked person or a few masked people could act in. According to Susan Padveen, Associate Chair and Associate Professor of Theatre at Columbia, acting pods allow Theatre Design students to have a more regular tech and design process and would add immensely to creating the reality of the plays.

“Our first use of the pods was with Edges, a musical theatre concert project that Justin Brill directed and Jermaine Hill musical directed in late January and early February. Edges is a piece of mostly solo songs, and so it had great potential for these times,” says Padveen.

The two sets of pods, which are about 14’ x 14’ and share some walls, can be used with cameras set in them. “Actors can either perform with the cameras set in place or with live personnel moving through the space, socially distanced, of course,” she adds. The pods also have a ceiling so actors can sing in them unmasked. “We are using them for Mainstage filming, performances of MFA projects, and we already used them for our first production of the spring season.”

As the set designer for edges, Nicholas Salinger, a senior in Columbia’s Theatre Design and Technology program, was in charge of making each pod look like different locations such as a bedroom, back deck, or front stoop. “Because of the way the musical was written, the actors never really interact with each other so having them in their own ‘pods’ or locations (the setting of the pod) is very similar to how I think I would have designed this for a typical stage,” says Salinger.

“We have never had prebuilt shells for students to design inside of before,” adds Padveen. “It is a little limiting, as there are some things they can't do, but boundaries are always uplifting in some ways, as they can make designers be creative in different ways. Actors and singers are used to looking at audiences instead of walls and cameras, but I think everyone is just happy to have performance opportunities.”

“With COVID there's a whole different set of procedures and ideas that go into set design,” says Salinger. “The major difference is the fact that we are designing to keep the actors, tech crew, and anyone else involved safe. And to do that we have to keep everyone separate. There's a real different mindset that designers, actors, and directors have when it comes to their specific roles.”

“The use of the pods and the skill set of working with cameras has been challenging, but everyone has been rising to the occasion and learning new skills,” says Padveen.