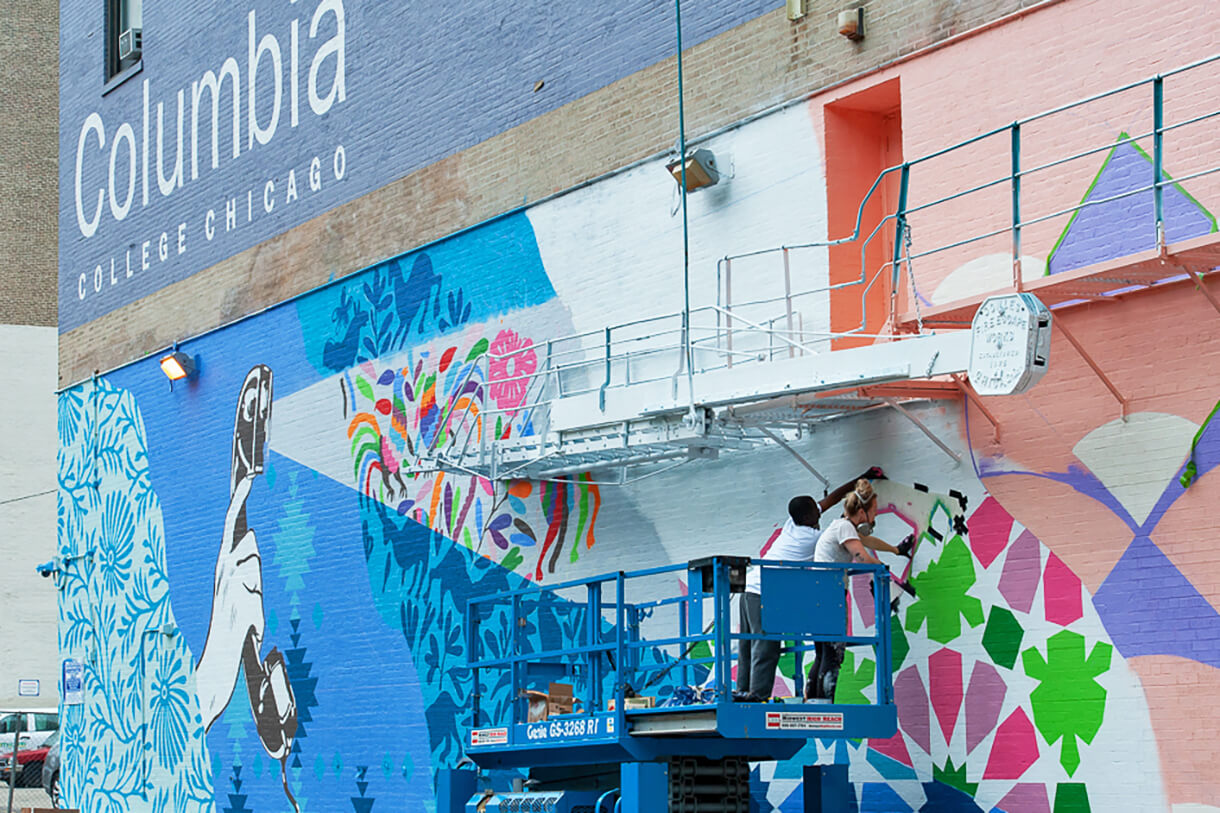 Photo: Sandra Steinbrecher
Mural by Kirsten McCrea, a result of an art exchange between Sister Cities Chicago and Toronto, becomes the newest addition to the Wabash Arts Corridor.

McCrea’s mural unveiling is part of an art exchange launched with Toronto in 2017, when Roe was selected to paint a mural on Toronto’s Roncesvalles Footbridge that connects West End communities to the city’s Waterfront. Toronto Mayor John Tory and Roe unveiled the mural on July 27, 2017, commemorating Canada’s 150th birthday and the “Year of Public Art in Chicago.”

“The mural exchange between Chicago and Toronto builds a cultural bridge between our two sister cities,” said Leroy Allala, Executive Director of Chicago Sister Cities International. “We are proud to have Kirsten McCrea’s work here in Chicago and are delighted that the citizens of Toronto are enjoying Justus Roe’s mural on the Roncesvalles Footbridge.”

The mural project is supported by the Chicago Department of Cultural Affairs and Special Events, the City of Chicago, the City of Toronto, Columbia College Chicago, the Consulate General of Canada in Chicago and the Toronto Committee of CSCI.

“Kirsten McCrea’s largest work to date—Listen to Learn—adds to the vitality of our campus with her vibrant, eclectic, and site-responsive designs,” said Neysa Page-Lieberman, chief curator of WAC and executive director of Columbia’s Department of Exhibitions and Performance Spaces (DEPS). “As we continue to showcase diverse, interdisciplinary street and public art in the heart of Chicago’s South Loop, we are thrilled to host McCrea’s mural on WAC while Columbia’s Justus Roe lends his vibrant geometric designs to the Toronto cityscape.”

McCrea’s detailed artworks showcase layered histories, using ornamentation and patterning to reveal alternate narratives that celebrate diversity in all its forms. Since 2008, she has run the affordable art subscription Papirmass and has mailed over 100,000 prints to art lovers around the world. Her work has been exhibited at the Shanghai International Arts Festival, Toronto's AGO, Montreal's Musée des Beaux Arts, and the Sea Wall’s Love Letters Festival (Toronto), and has appeared in numerous publications, including Fast Company, Juxtapoz, Canadian Art, The Globe and Mail, The Walrus, and Bust.

Roe works in a variety of visual mediums, including canvas painting, large scale wall paintings/murals, and sculptural installations. His work references architecture, city grid systems, and landscapes. His stylized forms, mark-making, and color palette develop work that is at once reminiscent of aerial perspectives and metropolitan environments.

About Chicago Sister Cities International
Chicago Sister Cities International (CSCI), an initiative of World Business Chicago (WBC), advances Chicago as a global city and promotes peace through mutual respect, understanding, and cooperation through citizen diplomacy – one individual, one community at a time – for the benefit of Chicago and its sister cities. To accomplish its mission, CSCI develops programs in the areas of cultural arts and tourism, global education, government relations and international business. Learn more at chicagosistercities.com.