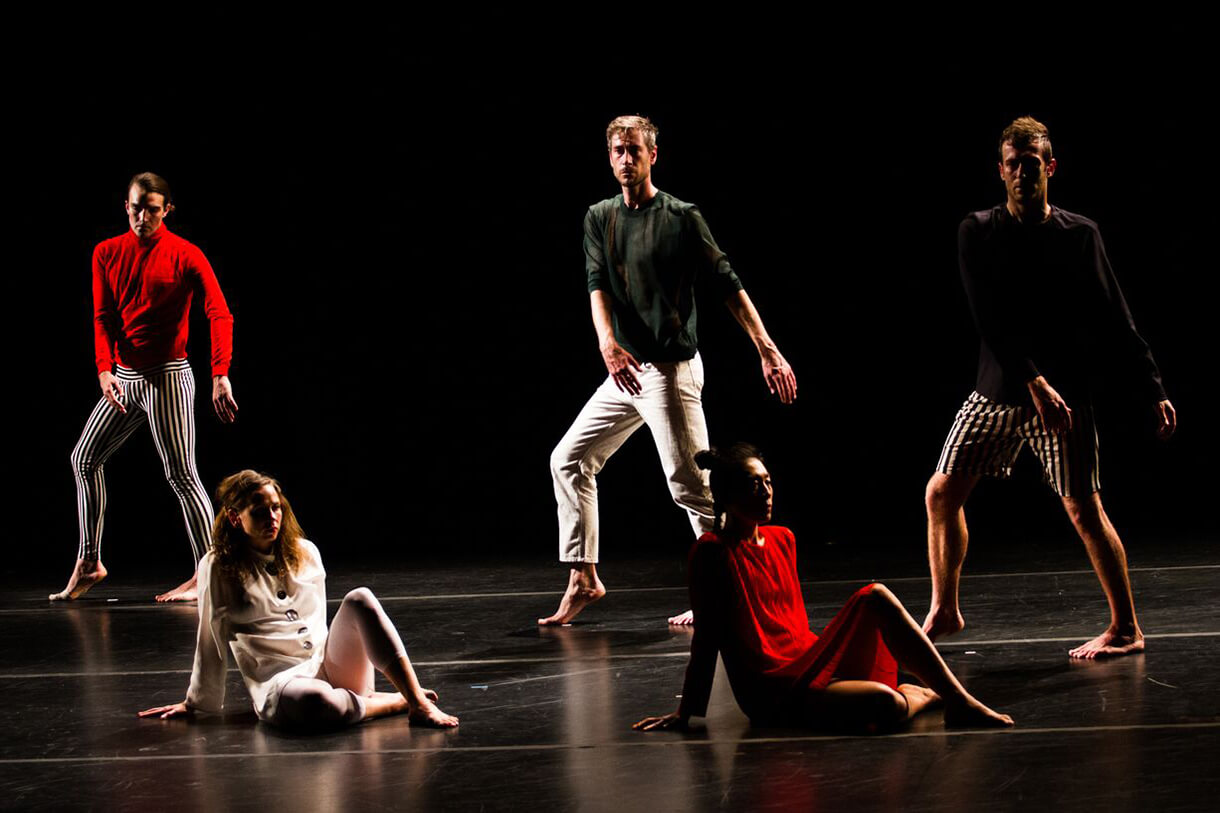 During its 45-year history—from its beginnings on Chicago’s North Side to its current four-story art deco facility in the burgeoning South Loop—the Dance Center has showcased companies of regional, national and international significance and commissioned provocative works that move the art form forward. Integral to the visiting artist residencies are opportunities for Columbia students to learn from world-renowned professionals, who also interact with Chicago Public School students and community organizations through a well-developed community engagement initiative. In addition, the Dance Center offers Chicago companies an affordable rental facility with aesthetic and technical specifications particularly suited to dance.

Audience and Community Engagement
Discussions with the artists follow most Thursday performances, and some programs feature pre-performance talks with artists and Dance Center personnel or guest lecturers. All out-of-town artists provide learning opportunities for Dance Center students and conduct community-based residency and educational activities, which might include master classes, lecture/demonstrations, in-school and community-based workshops, professional development workshops for educators and service providers and panel discussions.

Ephrat Asherie Dance
October 11–13, 2018
Making their Chicago debut, Ephrat Asherie Dance is dedicated to exploring the inherent complexities of street and social dance. Odeon, an original work for seven dancers and four musicians, is the second collaboration between sister-and-brother team Ephrat and Ehud Asherie (choreographer and musical director, respectively). Set to the music of Brazilian composer Ernesto Nazareth, known for mixing early 20th century romantic music with samba and other popular Afro-Brazilian rhythms, this work takes a hybrid approach to movement. Odeon delves into what happens when you bring together the extended family of street and club dances—including breaking, hip hop, house and vogue—remix them, pick them apart and challenge them to inhabit unfamiliar spatial and choreographic contexts.

Tere O’Connor Dance
October 18–20, 2018
Long Run is a major new work from Tere O’Connor, one of today’s foremost choreographers, whose abstractions engage the tension between the geometries of the rectangular stage, the organic forms of nature and the vast terrain of human behavior. Long Run pushes the emotional content of O’Connor’s movement to new physical extremes, allowing time-based elements like polyrhythms, velocity and duration to overtake the performers as they struggle to bring their bodies into a state of calm. O’Connor has a great love of movement and a deep commitment to choreographic craft and design, while more philosophical urges animate his work.

Hedwig Dances
November 1–3, 2018
Futura, a collaborative multidisciplinary dance choreographed and directed by Hedwig Founder and Artistic Director Jan Bartoszek, applies principles of the Bauhaus modernist art movement to dance, while also challenging notions of what constitutes choreography. Futura explores the role of social design in dance and how dance shapes, and is shaped by, society, art, architecture and design in the 21st century. In a parallel vein, Futura focuses on space, particularly the idea of confinement and freedom, as well as analogies between the Weimar era and our own time. Through playful experimentation between dancers and collaborators, Chicago’s Hedwig Dances builds a novel, richly theatrical movement playground threaded with a rousing musical score and a vibrant visual design.

Red Clay Dance Company
November 8–10, 2018
EKILI MUNDA|What Lies Within was inspired by a 2007 meeting of choreographers Vershawn Sanders-Ward (Chicago—a Dance Center alumna) and Jonas Byaruhanga (Kamapla, Uganda) at L’Ecole De Sables in Toubab Dialao, Senegal. The work seeks to unearth the cultural history and knowledge around identity that is archived in the body and the unapologetic liberation of this knowledge. EKILI MUNDA|What Lies Within was created as part of the TransAtlantic Project, a yearlong cultural exchange between Red Clay Dance Company and Keiga Dance Company. Chicago’s Red Clay lives to awaken “glocal” change through creating, performing and teaching dances of the African Diaspora—change that transforms cultural and socioeconomic imbalances in our local and global community.

Spectrum Dance Theater
January 31–February 2, 2019
Bessie Award-winning and Tony-nominated choreographer Donald Byrd returns to Chicago for the first time since his Dance Center appearance with Donald Byrd/The Group during the 1994–95 season. Spectrum’s artistic director since 2002, Byrd brings his Rambunctious Iteration #3 – The Immigrants, which looks to the works of American composers from countries that America has historically been at odds with or are part of the current debate on immigration: Mexico, Iran, Cuba, Russia and China. Comprising five works featuring the music of American composers who are immigrants from non-European countries, Rambunctious Iteration #3 – The Immigrants seeks to expose the rich artistic and cultural contributions to the American landscape of this particular group of immigrant artists.

Ananya Dance Theatre
February 14–16, 2019
Shyamali explores how dissent against oppression fuels life force. Inspired by the courage of women around the world to refuse silence and sustain communities against injustice, Shyamali means “dark green” in Bengali and invokes the resilience of grass, which springs up when trod upon. Artistic Director Ananya Chatterjea’s choreography combines metaphor and poetry in contemporary Indian dance.

Urban Bush Women
February 28–March 2, 2019
Chicago favorites Urban Bush Women return with a refreshed version of a company classic, Hair & Other Stories, updated by Associate Artistic Directors Samantha Speis and Chanon Judson. Crafted from personal narratives from our communities, kitchens and living rooms, social media and YouTube, the work debates the center of perceived American “values” and celebrates the persevering narrative of the African Diaspora. Hair & Other Stories explores disquieting perceptions of body image, race, gender identity, economic inequities and what constitutes freedom, liberation and release in our everyday struggles to rise to our “Extra-ordinary Selves” in extraordinary times.

B-Series
Fall: October 13, 2018
Spring: April 5 and 6, 2019
Each semester, a free mini-festival celebrates the cultures, histories and aesthetics of hip-hop and street-dance forms, such as breaking, popping and Chicago footwork. With a jam as the focal point, blurring the lines between spectator and participant and spotlighting some of the most talented street dancers in the region going head to head in dance battles, the B-Series is a gathering space where all can learn through and connect to the rich culture of hip hop.

The Dance Center of Columbia College Chicago is the city’s leading presenter of contemporary dance, showcasing artists of regional, national and international significance. The Dance Center has been named “Chicago’s Best Dance Theatre” by Chicago magazine, “Best Dance Venue” by the Chicago Reader and Chicago’s top dance venue by Newcity, and Time Out Chicago cited it as “…consistently offering one of Chicago’s strongest lineups of contemporary and experimental touring dance companies.” Programs at the Dance Center are supported, in part, by the Alphawood Foundation, the MacArthur Fund for the Arts and Culture at Prince, The Richard H. Driehaus Foundation, the Illinois Arts Council Agency, the Martha Struthers Farley and Donald C. Farley Jr. Family Foundation, the Irving Harris Foundation and the National Endowment for the Arts. Additional support is provided by the New England Foundation for the Arts’ National Dance Project, with lead funding from the Doris Duke Charitable Foundation and The Andrew W. Mellon Foundation, as well as the Arts Midwest Touring Fund, a program of Arts Midwest that is funded by the National Endowment for the Arts, with additional contributions from the Illinois Arts Council and the Crane Group. Special thanks to Friends of the Dance Center for their generous contributions to the Dance Center’s work.