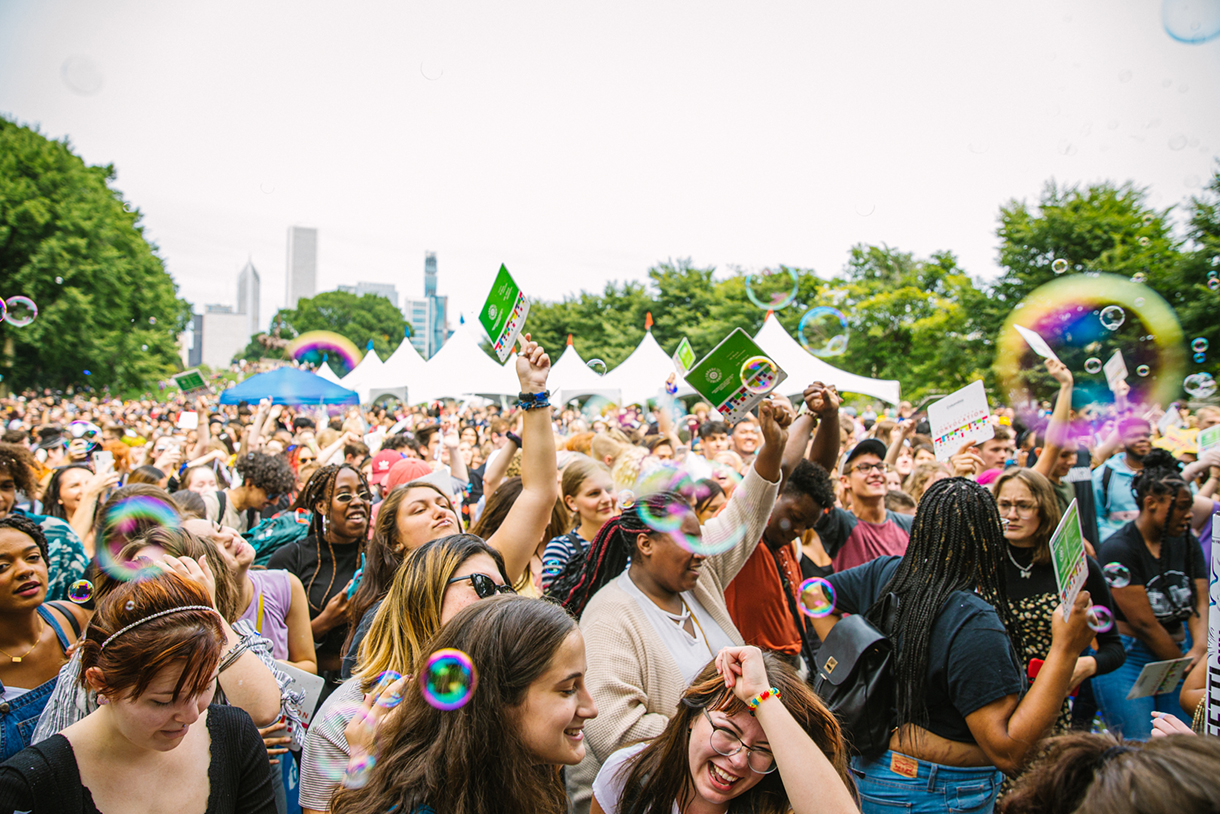 CHICAGO (September 26, 2019) – Columbia College Chicago’s overall enrollment grew in the Fall 2019 semester for the first time in 11 years, fueled by a nearly 34% percent increase in freshmen, the largest increase on record, college officials announced today. The college also announced that graduation rates rose to the highest on record for both transfer students and students who enter as freshmen.

“Columbia college is determined to offer academic and professional opportunities to growing numbers of students while remaining steadfastly committed to ensuring students of all backgrounds have access to these opportunities,” said Kwang-Wu Kim, president and CEO of Columbia College Chicago. “Our staff and faculty have been laser-focused on getting the word out about this wonderful institution, at the same time that everyone has endeavored tirelessly to sustain the tremendous value of a Columbia education.”

Columbia, the college for creatives located in Chicago’s South Loop along the city’s cultural mile, enrolled 1,748 freshmen in Fall 2019, compared to 1,305 in Fall 2018, a 33.9% percent increase – the highest uptick on record for the college. Overall, the student body grew nearly 2 percent year over year, breaking an 11-year trend of enrollment declines to stand at 6,947.

As it works to grow enrollment, Columbia remains committed to its inclusive and access-focused mission. Forty-four percent of the freshman class is eligible for federal Pell financial aid, and 97 percent of freshmen receive merit and/or need scholarships. The new freshman cohort is the most diverse ever, with 49 percent of freshmen being students of color. Fifty-one percent of freshmen hail from outside Illinois. Ninety percent of applicants were admitted for Fall 2019.

Ninety percent of recent graduates report being employed within a year of earning their degree.

“We measure our success by the success of our students,” said Kim. “Our graduates are creative innovators who shape what’s next thanks to marketable skills and expansive networks that allow them to make their mark on their chosen industries.”

The completion and enrollment inroads come in the context of an ongoing revamping of academic offerings, and an overhaul of financial aid at Columbia College Chicago. The college boosted its scholarship spending, in particular increasing the number of portfolio-based scholarships awarded by faculty and launching new scholarships for students at Chicago Public Schools high schools focused on the creative fields, as well as high school students from the Arts Schools Network across the country.

The curricular revamp includes new degree plans for all majors, a strengthened Liberal Arts Core, and embedding technology and business into majors. As part of its Diversity, Equity and Inclusion (DEI) initiative; Columbia continues to ensure the curriculum reflects non-Western and non-white cultures and contributions.

Columbia also is boosting its facilities. Earlier this month, college officials and students cut the ribbon on a new Student Center, which includes a makerspace, practice rooms, a career center, game rooms and event and meeting spaces, as well as food services, a fitness center, gender-neutral restrooms, and a reflection room for meditation and prayer.

“Columbia College Chicago is investing in its future and that of its students,” said Bill Wolf, chair of the Board of Trustees. “We are proud of the early success of our latest efforts and look forward to working to build on it.”

About Columbia College Chicago
Located along Chicago’s cultural mile, Columbia College Chicago offers practice-based learning to nearly 7,000 students – creative innovators who shape what’s next. Full- and part-time faculty members are working professionals share not only their academic and professional expertise with students but also help connect them to professional networks. Major in media and fine and performing arts are supplemented by a rigorous curriculum that includes liberal arts and sciences, technology and business and entrepreneurship. This blend positions Columbia graduates to make their marks on both their chosen fields and the culture of their times. Ninety percent of degree holders report being employed within a year of graduation. In September 2019, Columbia opened its five-story, 114,000 square-foot Student Center, a new hub for collaboration, creativity and innovation at the heart of the college.