Glass Curtain Gallery at Columbia College Chicago Presents Between Love and Madness: Mexican Comic Art from the 70s and Today 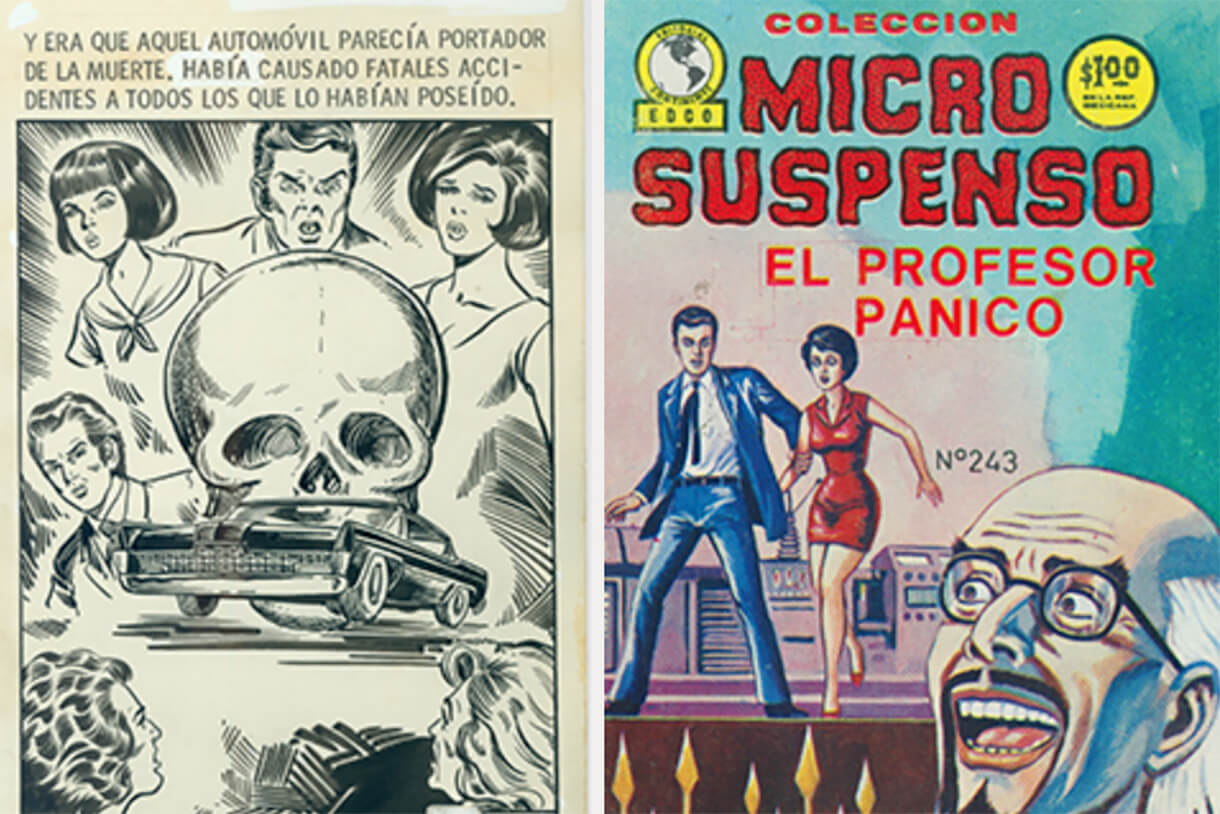 CHICAGO—February 25, 2019. Columbia College Chicago’s Glass Curtain Gallery will celebrate 40 years of Mexican comic art in an exhibition entitled Between Love and Madness: Mexican Comic Art from the 70s and Today. The exhibition will feature works from collections of ink-on-paper comic drawings originally published in comic books from the late 1960s and early 1970s, and will introduce Mexico’s “microcuentos” or “historietas”—flash fiction pieces that are little-known internationally. The exhibition will run from March 7–April 21.

“There is much missing from the history of Mexican comic art—biographies of the creators, copies of the comics in their published form, and even some publication dates,” said Meg Duguid, director of exhibitions for the Department of Exhibitions and Performance Spaces. “By shining a light on these works, we can honor their creators and start searching for the full background of these storytellers.”

“We are thrilled to host this exhibition and are especially grateful to bring contemporary Mexican comic artists Alejandra Espino and Augusto Mora to exhibit their work alongside the microcuentos,” added Duguid. “They are part of a new generation of comic artists committed to skillful drawing and progressive politics.”

Between Love and Madness: Mexican Comic Art from the 70s and Today is being organized by Christopher Sperandio, associate professor of Visual and Dramatic Arts at Rice University, who is working to preserve these works. Some of Sperandio’s students helped create the first iteration of this exhibition, which will now include his collection of over 1,300 ink-on-paper drawings and 14 complete comics published by Editorial Continente. Columbia’s Art and Art History Department is assisting with the exhibition, which is partially supported by a grant from the Illinois Arts Council Agency.

Alejandra Espino has a background in art history and visual arts. Born in Mexico, comics are Espino’s main device vehicle to create stories that explore the possibilities of femininity and the construction and rescue of an alternate history/herstory. She received the Festo/CONACULTA Graphic Novel Award in 2014 and the Poesía en Voz Alta (Poetry Out Loud) Award in 2017 as part of the AA&A collective. She has published her work in anthologies at Editorial Sexto Piso (Mexico), FLBLB (France), and in solo and collective self-published projects.

Augusto Mora is a comic book author who has worked at MAD Magazine Mexico, El Chamuco, and Milenio Diario. His work has been exhibited at BDMEX 2014 at Blueberry Festival in Bourgues, France, Paginas vivas at Island Museum at Cozumel, and Where are they taking us to? at Lawndale Art Center in Houston. He has created several graphic novels including El Maizo, la maldición del vástago (2010), Grito de Victoria (2013), Fuertes Declaraciones (2014), Where are they taking us to? (2015) and Encuentro en la Tormenta (2018).

Columbia College Chicago is a private, nonprofit college offering a distinctive curriculum that blends creative and media arts, liberal arts, and business for nearly 7,000 students in more than 100 undergraduate and graduate degree programs. Dedicated to academic excellence and long-term career success, Columbia College Chicago creates a dynamic, challenging, and collaborative space for students who experience the world through a creative lens. For more information, visit www.colum.edu