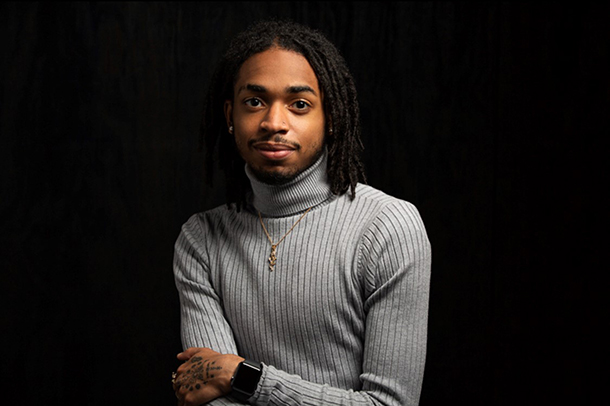 “I knew my life would change and I’m glad it did.”

What would you say has been the most surprising thing you learned at Columbia?

The most surprising thing that I’ve learned at Columbia is how collaborative the students are. I’ve had the experience of being able to lead a student organization and be a resident assistant, and much more, and those roles required an intense amount of collaboration so that we can better provide resources for our students and peers but also so that we can get to know each other. And here at Columbia, the ability to create things with people whether it be on set or in the classroom or for an event has been really astounding to me and has really prepared me with being able to work with people not only here but in the world at-large.

What experiences or courses at Columbia do you feel have been most beneficial?

I think one of the most beneficial courses that I have had vary between both television and cultural studies. On the television side I have really enjoyed writing for television with Missy Hernandez because it showed me just how much I want to write for TV and kind of solidified the path that I want to take in terms of getting into the television industry. I have also enjoyed the many producing classes that I’ve had at Columbia because they provide such hands-on experience that I don’t feel under-prepared when I go onto set or when I apply for jobs in television because I am very familiar with the many roles in the industry. I am also very fortunate to have been able to take television program development because although it is a lot of work, it has allowed me to really understand what it takes to create a show from scratch and how to present it to television executives.

Then on the cultural studies side I have been fortunate enough to have Sean Andrews as a professor for three separate classes including my independent study and all of his classes have been really beneficial for me I have taken so much from them and I have incorporated them into the way I view the world and how I frame discussions, arguments and research papers. The independent study in which we’ve studied black Marxism and social media and how those relate to the ongoing revolution for black liberation and freedom of all oppressed people around the world has been really important for my growth as a student, and as a scholar, it really allowed me to have the freedom to study what I want to study and also discuss it with a professor who cares about what I learned and with providing me with as much information as I can get to grow and to be a better scholar. Also, his class in which I took over the summer called intro to digital humanities really was a pivot in the way I research and in what I study as it pertains to our society today especially when it comes to data, surveillance capitalism, and the new multimedia approach that occurs when we learn today.

Also, some experiences that shaped me include:

What are your plans for after graduation?

My plan after graduation is to stay in Chicago for roughly a year before I evaluate where I want to move depending on what job I have as well as where I want to attend graduate school. I am not too sure what I want to study in graduate school yet, but I am leaning towards gender and sexuality studies. In the meantime, I plan to write a few scripts and develop my portfolio to have more material to submit to different writing festivals and competitions as well as studio executives. I’m also just going to take some time for myself and kind of ease into another layer adulthood as I figure out what the next chapter of my life looks like because I’ve been in school for so long that I want to prove to myself that I can exist outside structure of school for a little bit.

Do you have any advice for current students?

My advice to current students is to experience college at your own pace. Even if that means you have to take a semester or two off or if you choose to take summer classes every year to graduate early, just know that you are on nobody else’s time but your own. Know what you can handle and constantly reevaluate if something is too much for you and take care of yourself in ways that challenge you to be better and that can alleviate stress. Be the best version of yourself that you can be today and just take everything one day at a time.

If you were going to sum up your experience at Columbia in one sentence, what would you say?

I knew my life would change and I’m glad it did.