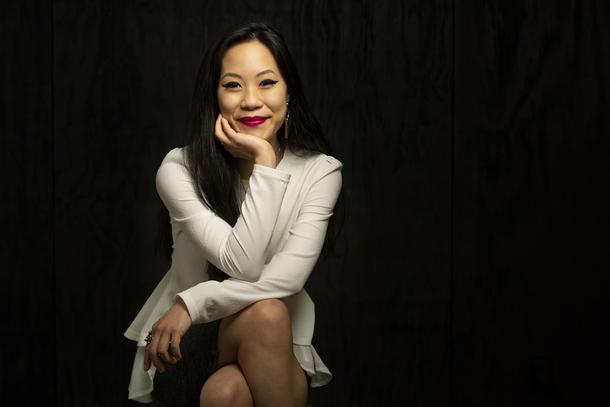 “Take advantage of your time at Columbia to become the most amazing version of yourself and be intentional with every project you take on. ”

What would you say was the most surprising thing you learned at Columbia?

The college experience doesn’t need to be like a big state school to have fun. Most of my friends went to big state schools with Greek life and D1 [Division 1] football teams. I felt left out not being able to relate to them, but when I think about what I like to do for fun, like going to the theatre productions, watching our quidditch team, or going to events in the city, I do not regret choosing a non-traditional college. I feel like when I leave Columbia, I’m prepared to enter the “real world” because that’s the only thing I have known since starting college.

What experiences or courses at Columbia do you feel have been most beneficial?

One of my favorite journalism courses I took was Writing and Reporting II with Jackie Spinner. We were always reporting on real-world events—why wouldn’t we when we have the city right at our fingertips? The first part of the class would be the lesson; sometimes it was how to write a strong anecdotal lead, or how to be less [intimidated] when interviewing people on the street. Then, we’d be sent out to write a story by the end of class. My favorite story was covering the 70th anniversary of Garretts Popcorn because we all ran—literally ran—to a Garretts Popcorn location to interview people about why they were there and what it meant to them. The exhilaration I felt was the best thing to push me to become a more confident journalist and brace myself for the unpredictable world of journalism.

I also would cite working for the Columbia Chronicle and Frequency TV. The journalism classes I took were amazing and helped me create my writing portfolio and my broadcast reel; but just like swimming, you can teach someone to swim, but until they actually do it day in and day out, you’ll never learn how to swim. My time at the Chronicle has allowed me to write about topics I would never have thought I’d get the opportunity to cover, such as the Jussie Smollett court cases, protests all around Chicago and creating a reopening campus video during the COVID-19 pandemic.

Working with Frequency TV has been amazing. They took a chance on me my freshman year, which opened the doors to working at the Chronicle, and gave me my first exposure to on-camera work.

What are your plans for after graduation?

This summer, I’ll be a digital media intern with AccuWeather through the Dow Jones News Fund. I’ll be working on editing weather-related news so not only communicating the weather, but also human impact stories. After the summer, I hope to land a field reporter position. I’d love to stay in Chicago, but really the world is my oyster so I’m looking forward to a new adventure.

Do you have any advice for current students?

I was so amazed at how talented everyone was at Columbia. There were people who already had EPs released and people who already had a working portfolio. It was intimidating, to be honest. But some of the people who I thought were established weren’t the easiest people to work with, which was really hard because Columbia focuses so much on collaboration. You can always get better at your craft, but if you’re not a nice person to work with, that’s not going to change so it’s so important to be kind to the people you meet. Stay humble and be willing to listen to others’ ideas.

If you were going to sum up your experience at Columbia in one sentence, what would you say?

Take advantage of your time at Columbia to become the most amazing version of yourself and be intentional with every project you take on.