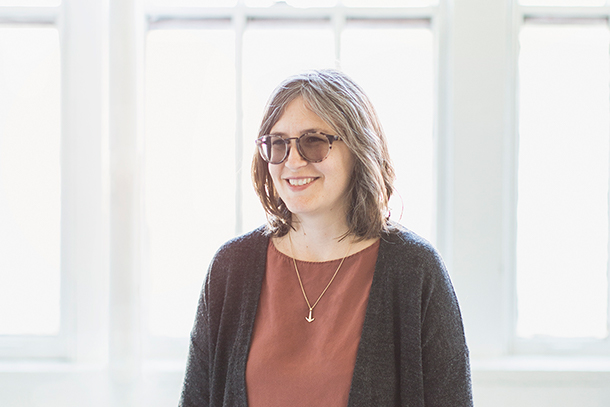 “There weren’t a lot of sewing patterns out there for contemporary clothes that people actually wear. It was really good timing.”

Jen Beeman ’09 began Grainline Studio as a side project from her work as a freelance patternmaker: a blog where she could explore the ups, downs, ins and outs of designing and sewing her own clothes. When she released her first sewing pattern in 2011, she realized her designs could fill a modern niche. Commercial pattern companies were releasing retro (and sometimes downright dowdy) patterns; the internet sewing community’s obsession with Grainline showed DIYers were ready for patternmaking to evolve.

“There weren’t a lot of sewing patterns out there for contemporary clothes that people actually wear,” says Beeman. “It was really good timing.”

In 2013, Beeman quit freelancing to focus on Grainline full time. Today, she has a staff of three. Based in Chicago, the studio sells 17 fashion-forward yet classic patterns ranging from button-up shirts to pajama sets, with more patterns being added all the time. (Think Madewell style you can sew yourself.) Plus, Beeman fills her blog with easy-to-follow sewing tutorials and beautifully curated fashion inspiration.

DEMO: What draws you to patternmaking?

BEEMAN: I like that you’re taking a 2D shape and turning it into a 3D form. It’s a part of the brain that a lot of people don’t get to use, and it kind of came naturally to me. It’s sort of like engineering for the body. You have to design something where you can move inside and be comfortable.

DEMO: What sorts of classes did you take while you studied fashion at Columbia?

BEEMAN: Columbia was a really good fit because it had a good technical program. I mean, everybody wants to be a famous designer, but in reality there are more jobs available in other places of the industry. Since there were a lot of technical and patternmaking classes available to me, I took them all, and that really prepared me to get a job afterwards.

DEMO: How do you go about creating a pattern?

BEEMAN: When I started, my designs were usually something that was missing in my wardrobe that I couldn’t find a sewing pattern for. There were less sewing pattern designers at that point, so it was a lot easier. Usually, if I’m missing something in my closet, other people are, too. Now, I try to think about what would go with our other patterns, what would be a nice pairing for something we already have. And then I just go from there: make a few samples, see what’s working.

DEMO: From start to finish, how long does it take to make a pattern?

BEEMAN: It’s hard to really quantify that because we have multiple patterns going at a time. We’re never strictly just working on one pattern—I think we’re working on four patterns at the moment, and they’re all in different stages. But generally, we need about six months from start to finish.

DEMO: What has surprised you the most about your journey with Grainline?

BEEMAN: Maybe just that it’s a viable business at all? I knew I couldn’t be the only person who sews for themselves, but it’s really surprised me how many people do—and how much it’s growing. Now, it always blows people’s minds when I tell them what I do. They’re like, “People sew?” Yeah, a lot of people actually. 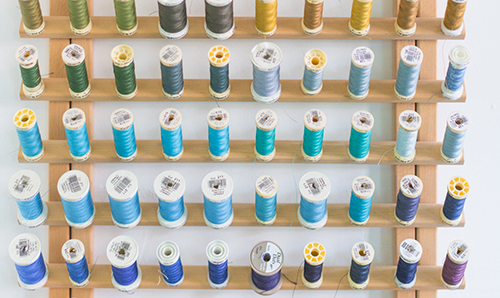 Beeman creates patterns and runs her blog from her immaculately organized Grainline Studio in Chicago.