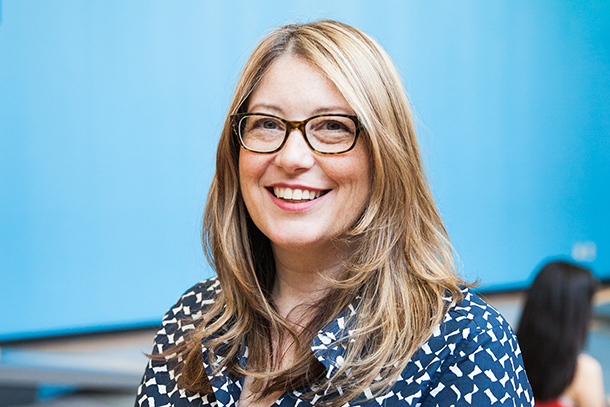 “We want to make sure this is a diverse and vibrant place.”

The shelves in the Tinkering Lab at Chicago Children’s Museum are crowded with young innovators’ past projects—built from wood, cardboard, paper towel rolls, basically any material imaginable. Museum President and CEO Jennifer Farrington ’93 looks through the creations fondly, pausing on a hand-written tip from a 9-year-old visitor: “If you don’t know what to build, start building and see where it takes you.”

“That’s beautiful,” Farrington says as she snaps a picture on her phone. Set against the chaotic shelves of the Tinkering Lab, she looks completely at home.

Since coming to the museum as an intern in the 1980s, Farrington has witnessed the institution’s massive growth firsthand. The Chicago Children’s Museum was founded in 1982 as a single room in the Chicago Cultural Center. Today it occupies a three-floor space in Navy Pier and hosts more than 400,000 visitors per year, making it one of the largest museums of its kind in the United States.

Farrington recalls feeling a bit aimless in her early college career. When she began interning at the museum as a Columbia student, using what she’d learned in television production classes to develop a mock studio, something clicked into place. “I liked that [the job] used all parts of my brain,” she says. “It appealed to my sense of wanting total creativity and total order at the same time.” 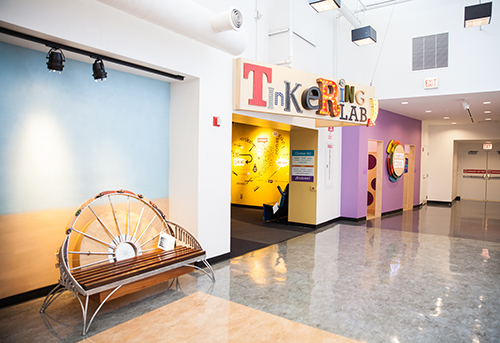 Chicago Children’s Museum’s Tinkering Lab is one of many places where children can learn through play.

Over the years, she continued to work at the museum, including promotions to vice president of education and chief operating officer.

In 2008, she stepped up as president and chief executive officer. Today, she presides over the day-to-day operations of the museum and the “collective of creative people” who come together to create exhibits and programs, and serves as president of the board of the Association of Children’s Museums.

The museum is the only cultural institution in the city devoted exclusively to young children and their families. That’s part of what Farrington appreciates about her work: Museums, she says, are not only important hubs for arts and culture, but also places of social justice.

“It’s where people come together,” she says, “and where children can learn that these places are their right—to be a participant in the cultural life of their city.”

Farrington still draws on her Columbia experience at the museum today. “It’s very much the Columbia way: a diverse group of learners and artists and people all coming together and making something,” she says. “I think Columbia is so ahead of their time in terms of learning by doing and DIY culture and integration of business and creative output.”

“Access is a really important part of what we do here,” Farrington adds. “We want to make sure this is a diverse and vibrant place where all sorts of families can see themselves in the space.”

A chalkboard in the Tinkering Lab collects ideas of what “tinkering” can be.

The museum’s main goal is to create a place where kids can focus on what Farrington calls “the universal pursuits of childhood”—activities that appeal to all kids such as creating, collecting, and playing. A kid can build a skyscraper, make a documentary, and use power tools, all in the same day. Conceived and developed in-house, the exhibits encourage children to learn through play and to engage with the three-dimensional world firsthand.

“I think it’s powerful for children to have their own spaces that are beautiful and special and different,” Farrington says. “This is a place that welcomes you here. This is a place you belong.”