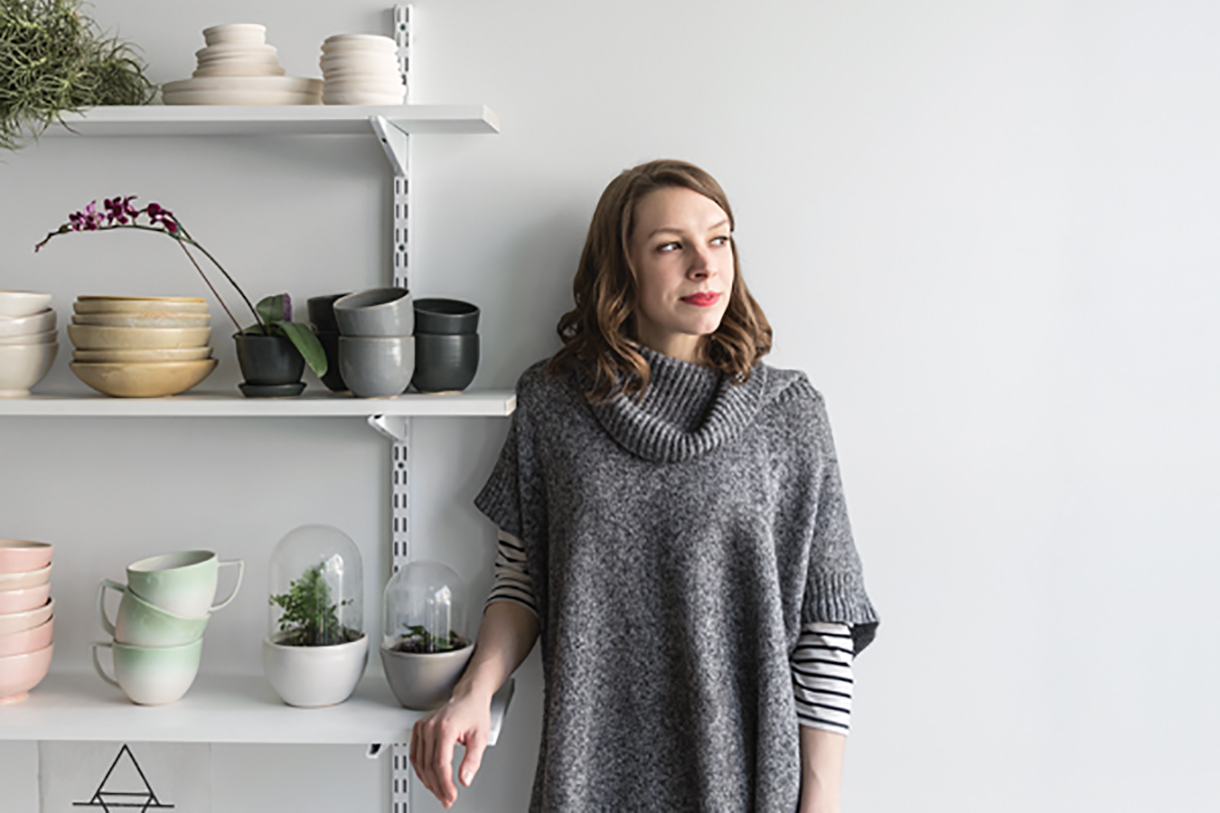 From the pottery wheel to the dinner table, Jessica Egan's ceramics fuse beauty and function.

In Chicago's Logan Square neighborhood, Jessica Egan ’12 can be found throwing on a pottery wheel behind a north-facing window, which (on a good day) floods the room with natural light. Behind her, three hanging shelves display neatly stacked green ombre washed mugs, terrariums, yellow and pink bowls, several potted plants, and one lonely orchid branching over the edge of a tiny charcoal pot. While her studio surroundings are neat, the clay dust covering Egan’s dark clothing reveals another story: one of passion and a willingness to get messy. 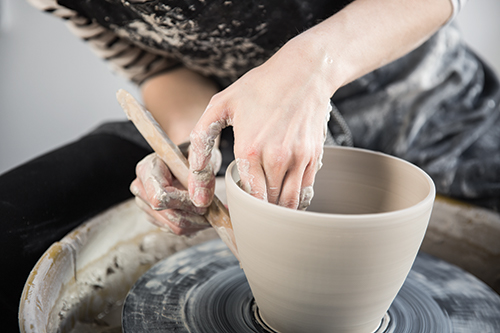 "[It's] really important to me that my ceramics are just as functional as they are aesthetically pleasing," says Egan of her Little Fire Ceramics brand.

In high school, Egan began creating functional ceramics: objects intended for use, not decoration. (Though they look great, too.) After graduating Columbia College Chicago with degrees in Fine Arts and Environmental Science, Egan started her own company: Little Fire Ceramics (a name inspired by the Gaelic translation of her last name). Since the start of Little Fire Ceramics, Egan’s work has expanded from online custom orders to local boutiques and tableware commissions at some of Chicago’s hippest restaurants.

Egan’s ceramics journey began in high school in Oconomowoc, Wisconsin, where she found herself in an art class with three pottery wheels that none of her teachers knew how to use. Determined to learn, she enrolled in art classes at Bryan Becker Clay Werks, a local studio. There, she found a mentor in owner and ceramicist Bryan Becker. Becker taught her traditional forms of throwing functional ceramics, but he also motivated Egan with his success as a full-time ceramicist. Soon, she was apprenticing for the studio and falling in love with the form. 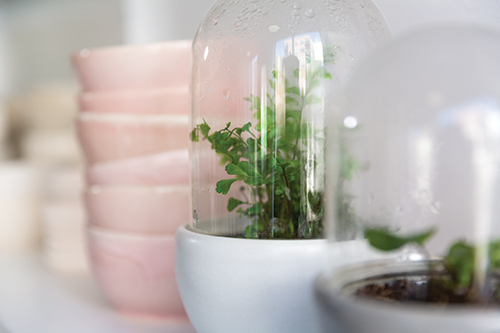 Glass Cloche Terrariums – The cloche glassware (intended for clocks) creates a closed system, allowing the terrarium to become humid and self-watering under the right conditions.

At Columbia, Egan created sculptural ceramics while continuing to take functional ceramic classes on the side at Chicago’s Lillstreet Art Center. When Egan graduated in 2012, her professors encouraged her to pursue a career in functional ceramics.

In Chicago, her ceramics caught on for their contemporary, minimalist designs. These days, she spends eight- to 10-hour shifts working in her studio on custom planters, tableware, and terrariums (which are sold at Sprout Home, a modern home and garden center, where she also works full time teaching terrarium-making classes). Her vases and tableware typically have splashes of color. She rarely uses texture, but when she does the patterns are precise: the impression of a leaf or shell, the holes in a colander, the printing of a name, or the texture of a coaster. 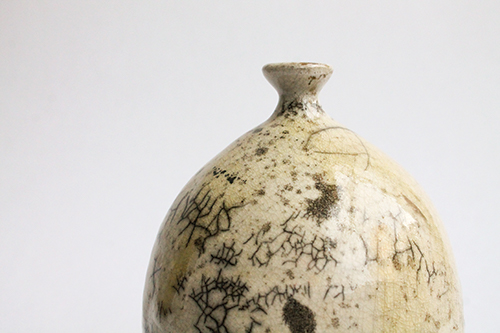 Raku Vase – This vase was fired using the Western Raku firing technique, where a vessel is put into a kiln and removed when red hot, then sprayed with water and intentionally dropped to create surface cracks.

Recently, Egan began collaborating with Chicago restaurateurs on customized tableware. Her first commission was from chef Justin Behlke, the head chef of Thurk, an underground vegetable-focused supper club. The two Wisconsinites collaborated to create a set of tableware to match Thurk’s earthy aesthetic: plates and bowls in yellow, gray, and green.

“My favorite part—and it does evolve—is collaborating and prototyping,” says Egan. “That’s where I get to explore new forms and work with other people, especially chefs or restaurateurs, because they’re thinking about plating. They’re thinking about these different aspects of functionality that maybe I wouldn’t have thought of.” 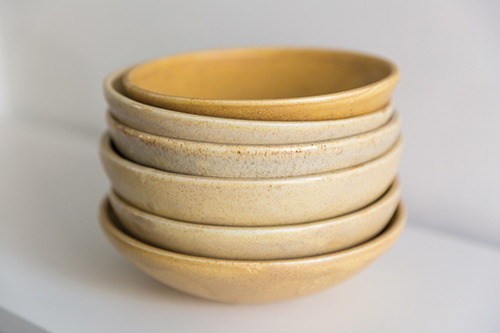 Egan was also commissioned by chefs Anna and David Posey, who own Elske, a Nordic-influenced restaurant in Chicago’s West Loop. She created a set of cobalt blue ombre plates, pink and white dessert bowls, and a set of color-dipped vases.

Both Behlke and the Poseys plate their food on Egan’s tableware, which gets plenty of love on their social media accounts. 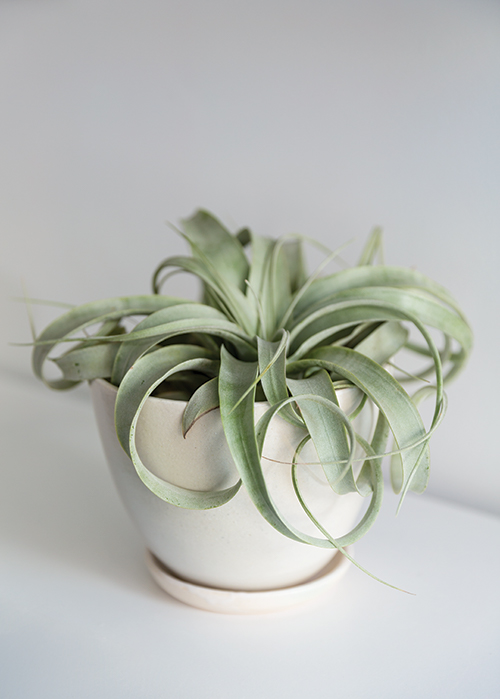 Tabletop Planter – "I just love designing with the knowledge that somebody is going to use this for something that's going to bring them so much joy," Egan says.

In the future, Egan wants to collaborate with more restaurateurs and explore new techniques to further evolve her work. Still inspired by her hometown mentor’s success, Egan continues to pursue expanding Little Fire Ceramics into a full-time career.

“I’ve always had this understanding that it is a tangible dream that I could own my own company, whether that is doing production ceramics full time or having my own studio,” she says. Egan’s work can be found in-store at select Chicago vendors and online at littlefireceramics.com. 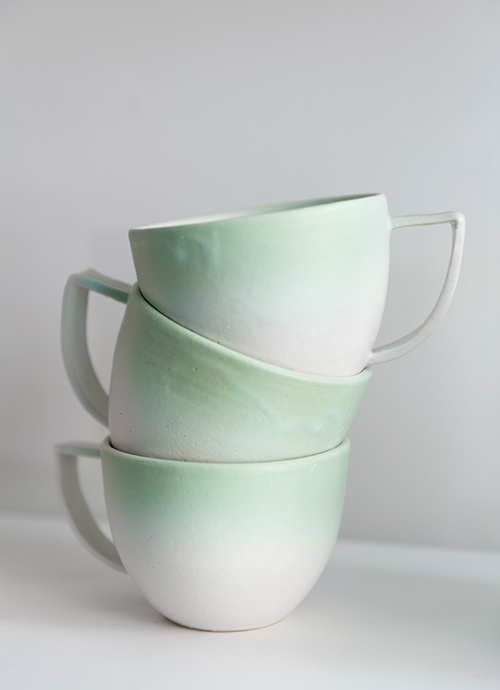 Luna Mugs – Egan uses an air-compressor and spray gun to achieve the ombre color fade on her Luna Mugs.