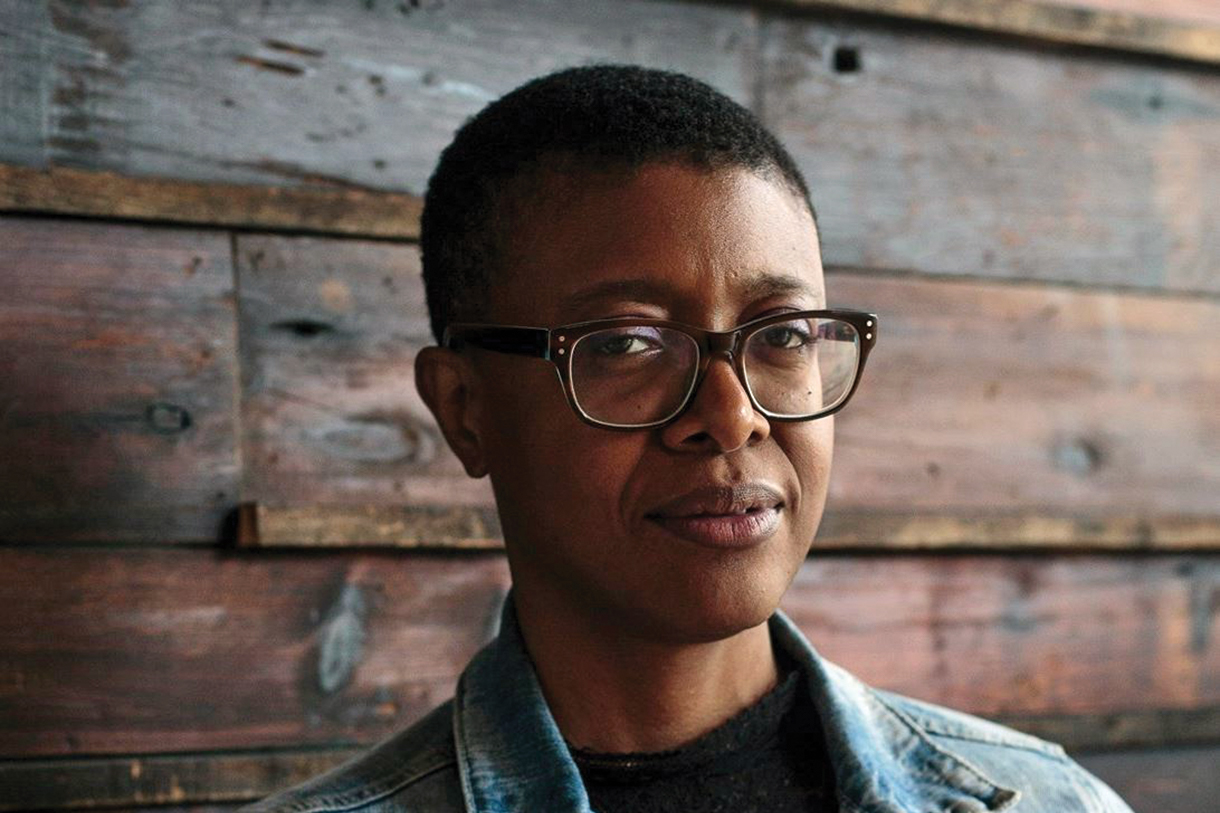 Krista Franklin fuses her love of writing with art-making in her AfroFuturist mixed media and collage works, which pay homage to notable African American authors, artists, and musicians.

“I decided to go back to school because I wanted to have more tools in my toolbox,” says Krista Franklin MFA ’13.

Prior to entering Columbia College Chicago, Franklin worked almost exclusively as a writer and poet. She began making mixed-media collages to work through writer’s block. Although she never obtained a formal art education as an undergraduate (Franklin got her degree in Pan-African Studies), she took to the collage medium. Franklin often centers photographic images of black women or celebrated cultural figures like Run DMC in her work while playing with material as varied as magazine cutouts and craft ribbon. Soon, her collages found popularity among her peers. 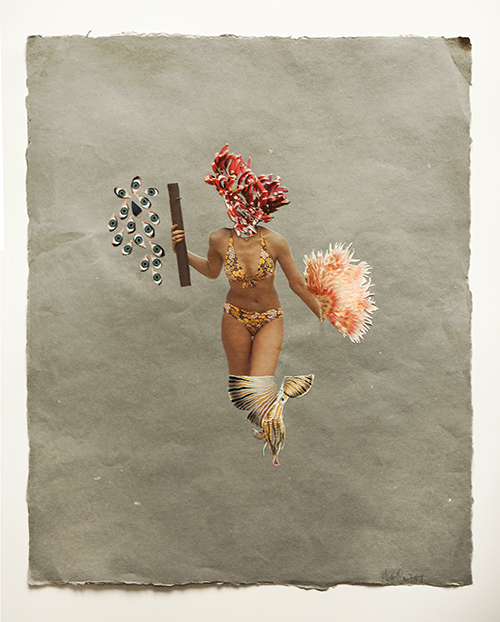 “It was really the poets in my life—the writers in my life—who realized what I was doing visually and inspired me to put it in the public eye,” she says.

Her time at Columbia in the Center for Book and Paper Arts allowed her to master her new creative outlet in collage. “Let me think of this as a craft, as an art practice, and let me consolidate it and put it in the framework of what I already do with my writing as an interdisciplinary artist,” she says about her decision to go back to school. 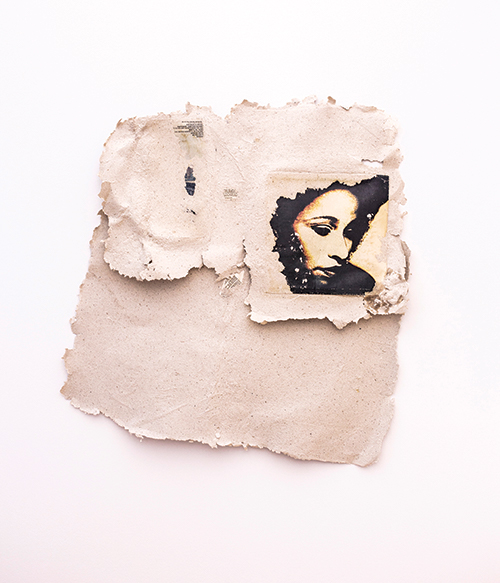 To the Limit To the Wall, album covers in handmade paper, 2016 – Many consider Franklin's work to be AfroFuturist: an aesthetic combining history, fantasy, science fiction, magical realism, and Afrocentrism.

Many of her pieces are inspired by her deep love of science fiction and fantasy. Franklin cites the science-fiction writer Octavia Butler as one of her biggest influences. Butler is one of the best-known African American writers of the genre. Franklin says her 2013 project, The Two Thousand & Thirteen Narrative(s) of Naima Brown, about a girl changeling on the precipice of young adulthood, was inspired by Butler’s work.

Like Butler before her, Franklin is interested in exploring the ways in which we find solace in our world and in the work we create. “How do we find peace in this chaotic landscape that we’re living in?” she asks. “What are the mechanisms and tools that we can use to find peace?” 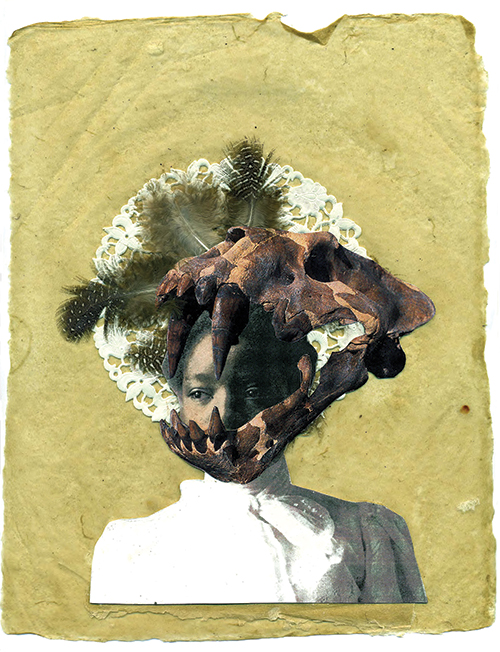 We Wear the Mask VIII, collage on handmade paper, 2014 – We Wear the Mask investigates negative perceptions of women by fusing female bodies with parts of animals, plants, and other organic entities. 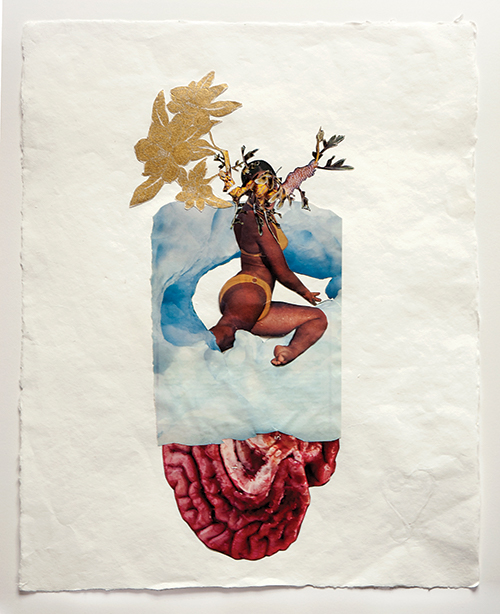 We Wear the Maski I, collage on handmade paper, 2014 – The series inspiration comes from 19th-century poet Paul Laurence Dunbar's poem "We Wear the Mask," which explores surviving in the world as a person of color. 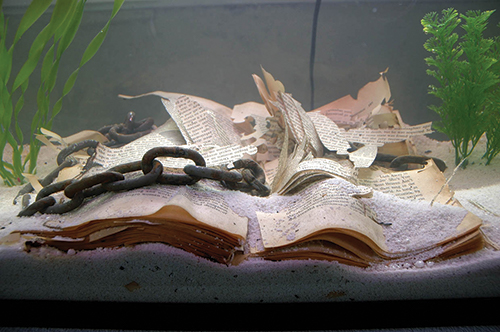 ...voyage whose chartings are unlove, altered book and mixed media in an aquarium, 2013 – In this case, her alteration and implantation of a book into an aquarium transforms an existing work into a new installation. The title pays homage to Rober Hayden's poem "Middle Passage."