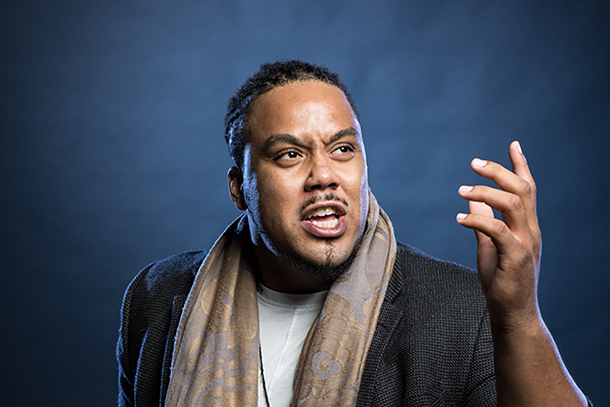 “You don't usually see this role done by a 29-year-old. It's a big role, and very challenging.”

Keanon Kyles sang his way from a janitor job to the Scottish opera stage.

When it comes to opera singing, Keanon Kyles ’10 says it all comes down to your technique and form. The tone and shape of a voice can change a classical sound to a gospel sound, or a jazz sound into an R&B sound. And even though Kyles has been singing from a young age, his initial sounds weren’t necessarily operatic.

“My sister introduced me to the Chicago Children’s Choir when I was young,” he says. “There was something intriguing to me about classical music. I just loved the phrasing, the sound, everything about it. But I wasn’t sold on singing opera.”

It wasn’t until a summer apprenticeship with Gallery37, funded at the time by Mayor Richard M. Daley, that he was immersed into the production of an opera. He watched and then performed in The Marriage of Figaro, and from there, it was all opera.

“It was a different world! The costumes, the music, the staging—it was a lot of fun,” he says.

But after graduating from Columbia College Chicago with a degree in Vocal Performance, Kyles found himself cleaning at ABC7 to pay the bills.

“I started telling myself to be positive, that it wasn’t going to be forever,” he says. “The money that I made could also go towards my dream as well as my bills. That’s when I got on a roll. I found a light in having the job.”

After one of the ABC7 producers heard Kyles sing at an after-hours recital, the TV station put together a feature story spotlighting Kyles’ musical talents. He started getting calls from agents, managers, and different opera companies. One of those companies was the Clyde Opera Group in Scotland.

“I did a small role in La Bohème for the Clyde Opera Group, and a lady with the group called me up after the show was over and asked me if I wanted to do the lead role in Rigoletto,” he says. “She said they had all loved working with me and wanted to again.”

Regarded as a staple of operatic repertoire, Rigoletto is about a hunchback court jester and the tragedy that befalls his beautiful daughter. Kyles was nervous to take the role. “You don’t usually see this role done by a 29-year-old,” he explains. “It’s a big role, and very challenging.”

But he accepted and began intensive training with his vocal coach. Not only did he have to reach higher registers than his usual mid-range registers, but he also had to find a way to emotionally connect with the character.

“Rigoletto is dark and tragic, and I’m a naturally happy and relaxed guy,” Kyles says. “I had to figure out how to get the text right, sing it right, and also be emotive. Those were the challenges, but I was determined to conquer them.”

And conquer them he did. Opera Scotland praised Kyles’ first lead performance, and Kyles himself saw immense progress in his voice. He spent two weeks in Glasgow for Rigoletto and is already looking for ways to go back and perform there again.

“I’m fearless! I kept telling myself, ‘Make yourself sing, Keanon,’ ” he says. “I know there are lots of young singers out there who will be looking at me doing what I love and saying, ‘If Keanon can do it, then so can I.’ ”