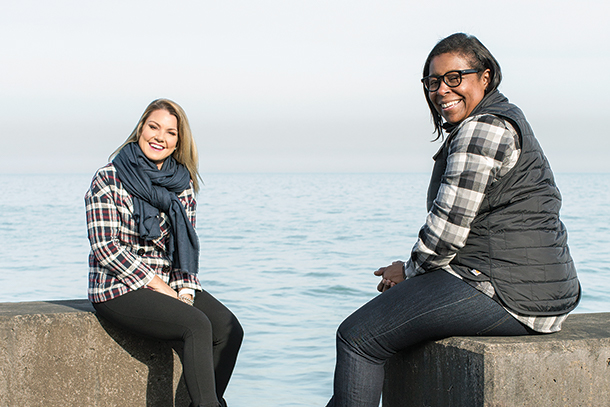 “We're working with the FAA and the industry and companies to show them, yes, women can fly. We're good pilots. We're able to handle big jobs.”

Two alumnae take to the skies with their aerial video service.

From sweeping shots above rows of verdant grapevines to aerial explorations of Chicago’s parks and harbors, Drone Girl Photography takes technology to the skies to shoot stunning video. The Chicago-based videography company was founded by Carmaine Means ’02 and Mika Stambaugh ’05, two Emmy Award winners who made names for themselves in Chicago’s news scene before meeting in 2013.

At Drone Girls, Stambaugh runs the company’s marketing and PR. Means pilots the drones and shoots and edits video. Plus, the female-owned business features the work of the nation’s first Federal Aviation Administration (FAA) certified female African-American drone pilot; Means and Stambaugh’s year-old business venture is as unique as the footage it captures.

While the drone photography business is taking off, only a fraction of drone pilots licensed by the FAA are female—just 4 percent of the more than 770,000 registered operators.

“We have a lot of opportunities to make things more inclusive,” says Means. “We’re working with the FAA and the industry and companies to show them, yes, women can fly. We’re good pilots. We’re able to handle big jobs.”

Though they didn’t know each other in school, both women got their news start at Columbia College Chicago. “I’ve always been a news junkie, always been a little nosey. What better avenue [for me] than journalism, where it’s your job to ask people who, what, where, why, when?” says Stambaugh, who studied Journalism. Just a month after graduation, Stambaugh joined Chicago’s CBS-2 news as a field producer.

“That’s when I learned about how news is done, about creative storytelling. It’s when I got hooked on news,” she says.

After initially working as a production specialist postgraduation, Means crafted a demo reel led to her photojournalism work in Milwaukee, then with Chicago’s ABC7, and finally a staff position with CBS-2, where she met Stambaugh, then working as the assignment editor.

“These two positions often have a love hate relationship,” says Stambaugh. “It’s very true!” Means agrees. “You either love your assignment editor or you don’t.”

Luckily, their working relationship was all love, facilitated in part by newsroom visits from Stambaugh’s French Mastiff puppy. And as Stambaugh left CBS to join media startup Touchvision and later serve as a spokesperson for Chicago Mayor Rahm Emmanuel’s office, Means discovered drones.

When a news segment guest brought one in, Means was intrigued: “It was a fixed drone. The only thing you could do with it was a hot air balloon movement, to go straight up and come down.”

The subsequent model included a stabilizer that allowed the camera to film more during flight, so Means bought one and taught herself how to pilot it, practicing at the Indiana Dunes.

While visiting Means, Stambaugh noticed the collection of helicopter-like drones on her table. “I said she should strap a GoPro to one of those and film some stuff” and suggested they start a business. Means laughed—her drones were already equipped with cameras—but Drone Girl Photography was born.

Means now shoots drone photos and video not only for the news, but for a wide variety of industries. “We’ve been contacted for construction and engineering, marketing, and other corporate work. We’ve worked for the Girl Scouts and filmed a wedding,” says Means.

“People are surprised how useful drone photography is,” says Stambaugh, “This is the future for photography and film.” 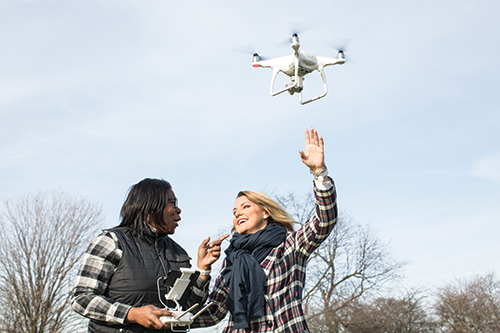 Together, Means and Stambaugh are working to pave a way for women in the predominantly male drone photography industry. 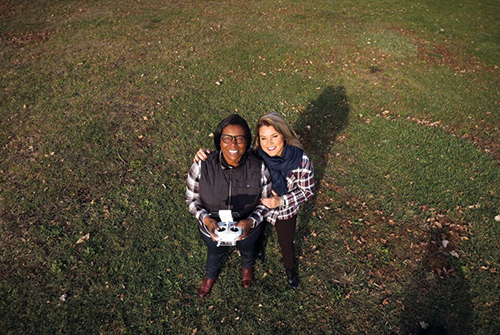 This photo was taken from a drone piloted by Means. The Chicago-based pair combined their journalism backgrounds with the increasingly popular drone technology. They have used drones to capture events and everyday happenings throughout the city and its surrounding suburbs.