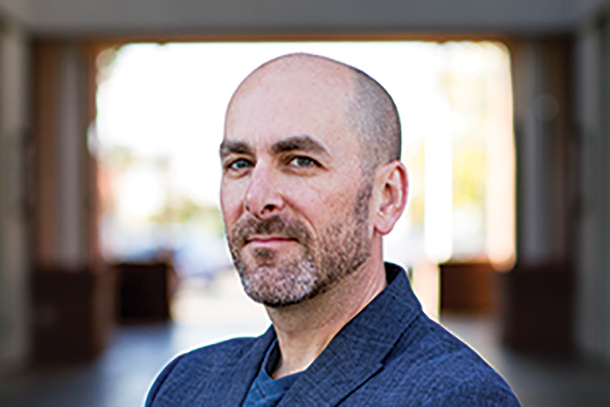 “Design is, after all, about people. We should listen to them.”

Swipe right to continue. Scroll down on your timeline. “Siri, what’s the weather today?” You may not realize it, but UX (user experience) design shapes the world around us. Twenty years ago, when Mark FelcanSmith ’96 first began working with UX design, it was an entirely different profession.

“Think about Google Home or Amazon’s Alexa—both allow people to use their voices in unique, interactive ways,” says FelcanSmith, the design director for one of the world’s most profitable retail chains: Kohl’s department stores. “This is what designers are trying to do: create new opportunities regarding how we interact with the world. We’re problem solvers.”

In the ’90s, when UX design was still a budding practice, it usually meant web interactions like dropdown menus or responsive animations. (A box slides onto the screen: “Purchase complete!”)

“The internet was still pretty nascent,” says FelcanSmith. “As a designer in the tech industry, you needed to do a little bit of everything.” A designer, developer, and business analyst—there were no set roles. The significance of technology in our daily lives continued to bloom—Windows 95, texting, email, GPS navigation, smartphones—so designers had to be flexible and rapid learners.

“I took some computer courses while studying at Columbia,” says FelcanSmith. “In one particular class, we spent the majority of our time taking apart Macintosh computers. Just unbolting them entirely and studying every facet of how they operate.”

FelcanSmith attributes these foundational exercises as a launching pad for his tech and design career. After graduation in 1996, he spent the next two decades building an impressive résumé: administrative design roles at Allstate Insurance Company, Sears Holding Corp., and Walgreens, where he led his teams to revolutionize pharmacy interactions. FelcanSmith and his team at Walgreens wanted to make the prescription refill process easier, especially for people with mobility limitations. In 2011, they released a mobile app feature that changed the healthcare market: refill-by-scan. Scan a prescription bottle, and a refill order is placed in seconds. It’s that easy.

Today, FelcanSmith leads four separate design teams at Kohl’s headquarters outside of Milwaukee, Wisconsin, and the Bay Area (where he lives). His teams design everything from e-commerce features on the Kohl’s website and mobile apps to in-store digital kiosks and point-of-sale systems. He and his teams take an empathetic approach to design, always striving to create natural, productive interactions that take into account the human at the other end of the experience.

“I think the power of design is moving well beyond just software design or industrial design,” he says. “Because technology is a part of our everyday lives, we have the opportunity to improve the world. Design is, after all, about people. We should listen to them.”