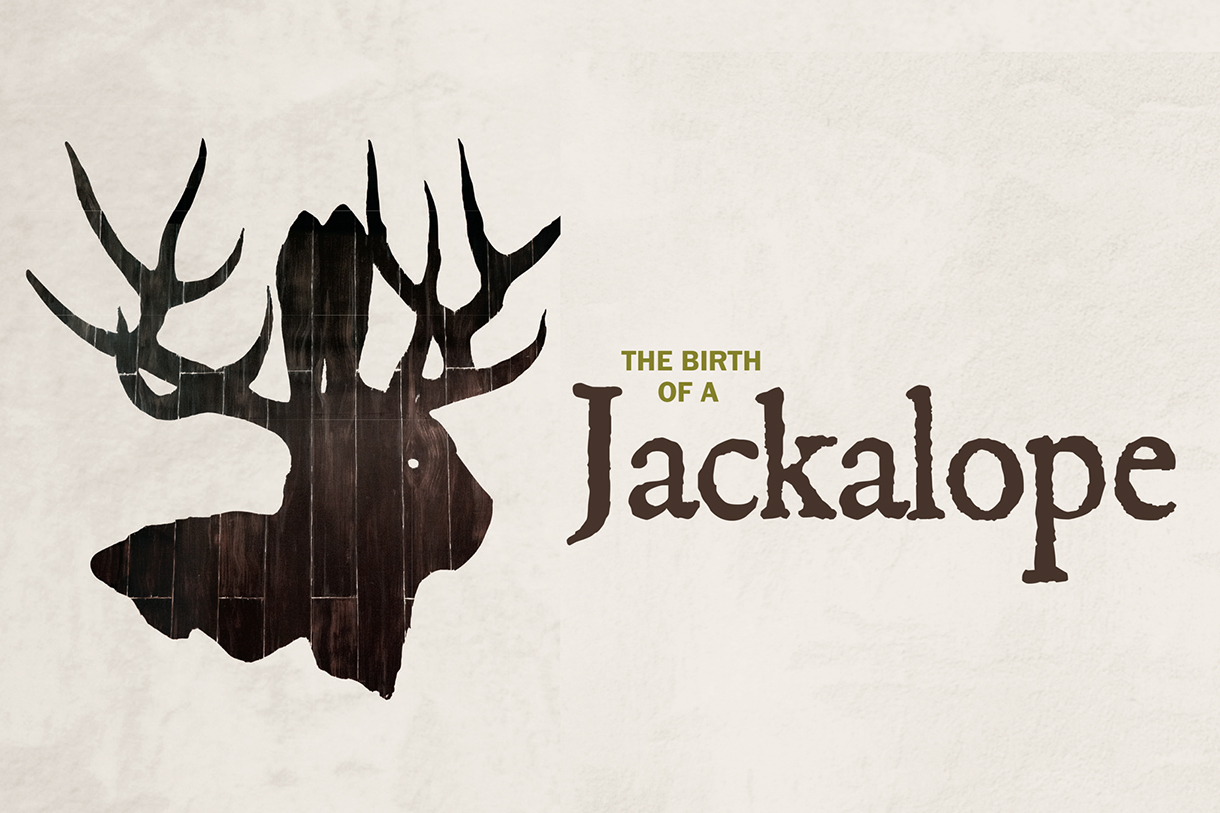 The Birth of a Jackalope

In 2008, three Columbia students began Jackalope Theatre Company as a class project. This year, it begins its 10th production run.

In 2008, three Columbia College Chicago students wrote a five-year plan for a fictional theatre company as part of a senior class project. Then they graduated and brought Jackalope Theatre Company to life. Now in its ninth season, Jackalope Theatre is about to celebrate a decade on the Chicago scene. Today, the company resides in two Edgewater spaces—The Frontier, a 40-seat storefront theater on Thorndale Avenue, and their primary performance venue in the Broadway Armory Park building. From their humble beginnings on the West Side to their lauded productions, Jackalope has produced 21 plays, garnered praise from top Chicago theatre critics, and continues to stand out in a city teeming with storefront theaters. Here, Jackalope’s founders and mentors recall the company’s gritty beginnings, ambitious growth, and where they got their mythological name. 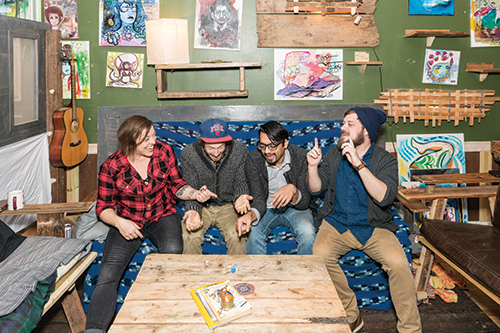 The Jackalope founders reunited at Swanson’s apartment. From right to left: Ware, Swanson, Ahmed, and Menary.

WARE: The final project was to get into groups, make up a fictional theater company, and write a fictional five-year plan. And we liked ours so much that we decided to do a play.

MENARY: We were one of three companies that came out of this class. And it’s probably why, ultimately, they don’t have this class anymore because…

AHMED: It’s not necessarily a great idea to jump into a project like this.

MENARY: Right. We knew we wanted this to have something to do with American identity. We were really excited about the idea of working together. Then going through the class, there were so many assignments that lit that fire even more.

PHILIPPE RAVANAS: [The founders] were full of energy and already had an artistic vision. They didn’t have a business vision whatsoever. But from the get-go, they were fairly complementary, all good friends willing to get involved in the different production aspects. This work is eminently collaborative. You don’t do theatre by yourself. The class worked as an incubator. Students had to figure out if they could work with each other or if they were going to kill each other.

SUSAN PADVEEN: They had a great combination of interest and passion and talent. They were also open to the idea of the company helping people move forward and making connections in the Edgewater community, which is a hard skill to learn. Having their own stage early in the game allowed them to invite other people to come in and serve their world, but also gave them an identity tied to their location.

WHAT’S IN A NAME

Menary and Ahmed bonded in part over a shared love of iconic American playwright Sam Shepard. When looking for a theatre company name, they wanted something to represent a broad view of American mythology.

AHMED: You and I were walking…

MENARY: We were smoking a cigarette out in front of the building.

AHMED: We were walking there, kind of briskly.

MENARY: You’re right, because we were running late. And we were trying to think of a name. We knew the phrase “American mythos,” which we tossed around with the idea of examining America, with this kind of archaeological eye. And we were throwing around names like Sasquatch. We wanted it to maybe be blue. The Blue Ox Theatre Company. People were like, “Just make sure you don’t make it a verb.”

AHMED: Yeah. Adjective, noun. Red something. Or Dusty something.

AHMED: We kept on narrowing it down and came up with Jackalope. Not two words. Not adjective, noun. Just noun. 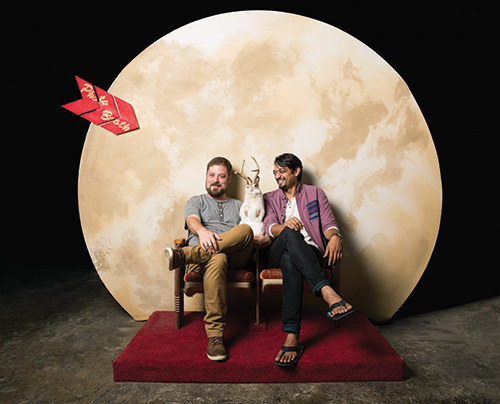 Menary and Ahmed pose with their namesake: a taxidermied Jackalope. (His name is Chester.)

Jackalope started off borrowing the stage in a multipurpose arts space on the West Side. The Frontier storefront theater opened in what used to be an Edgewater deli. Soon after that, they secured a primary performance space in the Broadway Armory Park building.

WARE: [In the beginning] we randomly found this place this guy was renovating [on the West Side]. He didn’t even charge us rent, he just charged a percentage of the tickets. And we put on [The Last Exodus of American Men] and because it’s Chicago, we got a few critics to come out, and they were probably kinder to us than they needed to be.

SWANSON: I wrote the first play Jackalope produced, called The Last Exodus of American Men. It was basically about four young men who are hospitalized with mental illnesses. Through the course of the play, they decide they need to escape to Canada to avoid a nuclear holocaust.

DABU: I played one of the four boys. To be honest, I don’t remember the character’s name. What I think bound us all together was we just wanted to keep working. We graduated from Columbia that summer and said: Let’s do something.

They found a place way over on the West Side. A drummer owned the space upstairs and he started practicing at 10 p.m. Our show started at 8 p.m., and it was exactly two hours. So, if we started even five minutes late, the last five minutes of our show would have a drum scoring. It was a six-by-eight-foot stage. It was everything you read about basement theater. But we were hungry and wanted to do something. We didn’t care if five people came. Anyone who has put on a show for you knows how hard it can be.

WARE: I cannot underplay the role Andrew Swanson had in making the company what it is today. He was the person who was on the ground talking to the aldermen, talking to the people at Broadway Armory. He’s almost solely responsible for us having the space at The Frontier, which led to us having the space at the Armory, which led to us being a company that was part of the neighborhood— and what I do believe will be a lasting part of Edgewater and of Chicago.

As Jackalope figured out their internal structure, they continued staging and premiering plays. They got their first Chicago Tribune review for the 2009 premiere of Moonshiner, a prohibition-era play written by Swanson and directed by Menary.

MENARY: We started out as three co-artistic directors. And everyone said, “That’s a bad idea.”

AHMED: It’s already a bad idea that you’re starting a company. Don’t start out like this. It became quickly evident that if all three of us had to communicate on every single thing, our pace would be much slower.

MENARY: And everything happened a lot slower because we discussed everything. At some point, we decided we needed someone to just run things as an artistic director. And that’s when we did Moonshiner.

WARE: The real first big hit was Ike Holter's Exit Strategy [2014]. That was the first—and maybe the only—time we got four stars from the Trib and sold out our run and remounted and recast so we could keep running the show. It’s about a Chicago public school being shut down. It was written right after the time when the mayor closed a bunch of schools in Chicago. 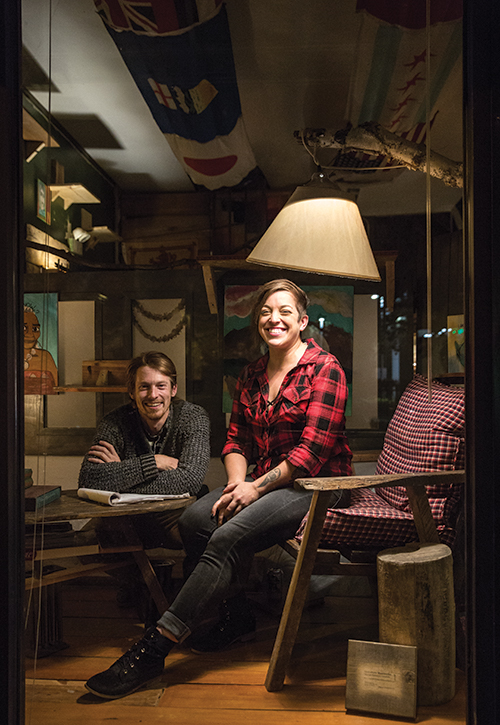 Swanson and Ware are half of the team that began Jackalope Theatre in 2008.

Over the years, Jackalope settled more firmly into its own voice—staging plays that examine lives of diverse, modern-day Americans and carving out a niche in the Chicago theatre scene.

PADVEEN: [In that Columbia theatre class, we taught with] a guidebook for producing theatre centered on the “path of least resistance.” These are things you can do to get your work done, but not piss people off. These were some of the core values shared by [former Theatre Chair] Sheldon Patinkin, who was all about ensembles.

RAVANAS: The theatre scene in Chicago is extremely entrepreneurial. By that I mean, every year 30 theaters die and 30 theaters are born. For many actors, the best and maybe the only way to be seen on stage is to build one for yourself.

SWANSON: I was always pseudo-capable with tools as a kid. I’ve been building sets for Jackalope for a long time, so the skills just grew through obligation, really. I now also design and build my own furniture. I dedicate a ton of time to Jackalope, talking to schools, small businesses and restaurants in the park district. We’re trying to facilitate a strong relationship with the neighborhood.

DABU: From that weird location on the West Side to the spaces they now have in Edgewater, they’ve been resourceful in all areas, including obtaining set pieces, costumes, and lights. If you see a Jackalope show now, just think about that rise since we did that show 10 years ago.

WARE: I think our commitment to local playwrights meant that the work we were presenting was reflecting the world we actually live in, as opposed to the world people were writing about 50 or 60 years ago. That always made me feel really good—that we were doing our best to tell a broad range of stories about all the kinds of people that live in Chicago and America.

In 2018, Jackalope will celebrate its 10th anniversary. Upcoming productions include three world premieres: 1980 (Or Why I’m Voting for John Anderson), Frankinland, and The Light Fantastic.

MENARY: Our main thing, right now, and what has been, I think, for years, is the idea that we value our artists. And when you value your artists and allow them to create, and when you create work together as a unit, there is a fullness, a richness, to the work.

AHMED: And we hope that they’re all American plays, and that they’re speaking to an American experience in a way that you may not have heard before. So, I’m thinking, “Was that how we were wanting that to go 10 years ago?” Yeah, kind of. Or really close. It feels to me that we’re not thinking about the next 10 years, but the next 25. What’s the next quarter of a century of Jackalope going to be?