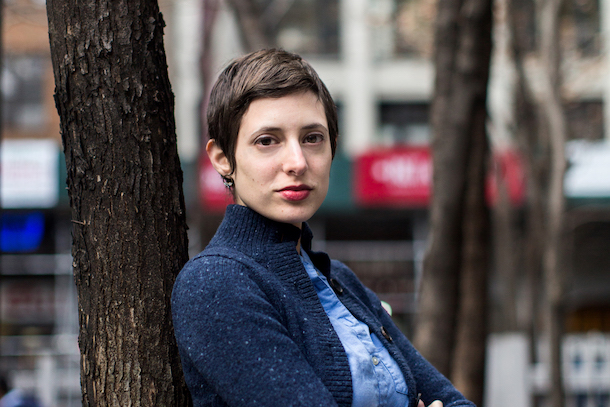 “I thought it could be really cool to write a book that could fall under the genre of fairytale noir. I tried to give Alice kind of a hardboiled voice set in this fantastical fairytale-inspired world.”
—Melissa Albert

Melissa Albert ’06 grew up loving fairytales. So she wrote her own.

“I loved [fairytales] as a kid in a very straightforward way—I loved the magic, I loved the good versus evil, I loved the comforting shapes and rhythms that are so familiar and so satisfying,” says Melissa Albert ’06. “Clearly there’s something in our DNA that responds to these particular narratives.”

Albert’s love of fairytales inspired her to write her own: 2018’s sinister and rollicking New York Times bestseller The Hazel Wood. At the novel’s start, bad luck has followed New York City teenager Alice all her life. When her mom is kidnapped, it seems tied to her grandmother, the famous novelist Althea Proserpine, whose out-of-print book of fairytales has earned a fevered cult following. As Alice embarks on a road trip to find her grandmother’s Hazel Wood estate, the lines of fantasy and reality begin to blur, and she makes a startling discovery: Althea’s characters seem to be real—and dangerous.

“I thought it could be really cool to write a book that could fall under the genre of fairytale noir,” Albert says. “I tried to give Alice kind of a hardboiled voice set in this fantastical fairytale-inspired world.”

Albert has been telling stories since before she could hold a pen, dictating tales about evil petting zoos and deep, dark woods for her mother to write down. At Columbia College Chicago, she studied Journalism and covered arts and entertainment for publications like Time Out Chicago, Chicago Journal, and Bookslut.

Eventually, Albert wanted to see her own name on the cover. In 2016, she got serious about a manuscript she’d been working on for a couple years. “I was like, ‘If I want to finish something, I need to stop writing for development houses. I need to take a chance on one of my own things,’” she says. Flatiron Books published The Hazel Wood in January 2018. Albert got word that it made the New York Times bestsellers list while flying to Dallas with her husband and baby on her six-city book tour. “We got to the hotel and put our baby down and had a drink in the bathroom,” she says. “It was great. It was perfect.”

Albert hasn’t been able to leave the world of The Hazel Wood yet. Though she wrote the novel to stand alone, she’s working on a sequel and a companion book of fairytales already signed with her publisher.

“As an adult, as I go back and reread fairytales, I love how they have so much room between their lines to play with,” she says. “The best, most satisfying narratives are the ones you can tell again and again.”