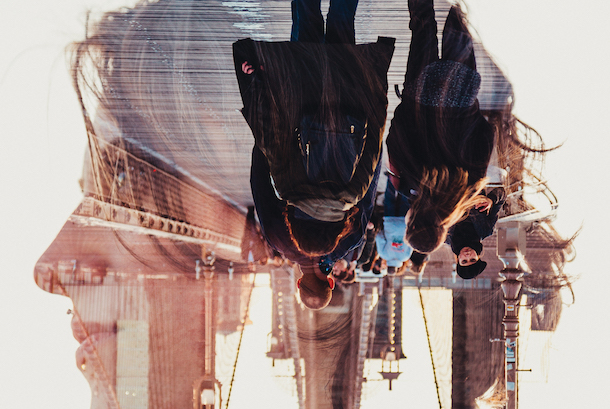 The business of play has never been bigger. The video game industry is worth $100 billion globally and is projected to grow by billions more each year. Meanwhile, technical innovations and new platforms regularly disrupt the landscape. It’s dynamic, it’s competitive—but most of all, it’s fun. Here, three Columbia College Chicago alums—EJ Baker ’12, Ali Cedroni ’16, and Blair Kuhlman ’13—talk to DEMO about the future of gaming. 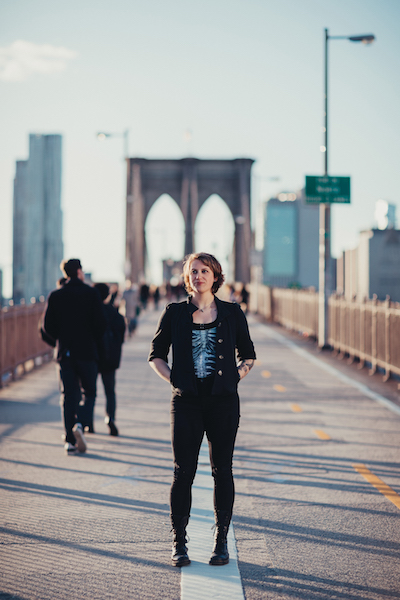 Lights flood the stadium. Jumbo screens loom over center court. Sellout crowds cheer on two elite teams vying for a world title at the Staples Center in Los Angeles. Millions of fans around the world tune in to a live broadcast. But there’s not a basketball in sight.

This isn’t an NBA playoff—it’s the championship for League of Legends, one of the world’s most popular video games. League of Legends draws more than 100 million active players per month, and its 2017 World Championship offered a $4 million prize for the winning team—just one example of how massive eSports video game competitions have become.

“It’s insane just how popular eSports has become,” says EJ Baker ’12, an associate producer at Riot Games, the creative force behind League of Legends and its worldwide competitions. “We have multigenerational families that are Yankees or Cubs fans. I’d love to see multiple generations of eSports fans,” they* say, noting that many schools offer eSports scholarships as a pathway for aspiring professional gamers.

Baker works primarily on the production of set design for Riot Games’ large-scale worldwide events, translating online tournaments to venues around the world. (Last year, the world championship was held in China.) They collaborate with event managers and artistic designers to build sets that captivate audiences, both in person and on broadcast platforms like Twitch and YouTube. “The most challenging part of my job is the sheer amount of moving parts involved with producing an event,” says Baker. “That’s what I love about it. There are always ways to improve.”

Baker’s journey began at Columbia, where they originally studied Musical Theatre. But they realized their dream of performing on Broadway wasn’t in the cards, so they pivoted to Animation. Associate Professor Jim Rohn became their mentor. “I cannot thank him enough for being as supportive as he was,” Baker says. “It was really easy to get integrated with the Interactive Arts and Media Department’s game development program. That’s how I got into programming.”

After graduation, Baker moved to Seattle to work in software development. Meanwhile, they were increasingly interested in video games. “I went to BlizzCon one year and stumbled into the live StarCraft world championship finals,” they say. “I had no idea that this world even existed. It was incredible. In that moment, I decided that I wanted to do this.” Fast-forward a few years, and they started organizing their own StarCraft 2 tournament online, just for fun. Eventually, a coworker who previously worked at Riot encouraged Baker to apply for a job as a production coordinator at their New York office. Early this year, they were promoted to associate producer. “I got here because I decided that it was a thing I wanted to do, so I did it,” Baker says.

Baker observes that there’s a dichotomy between their work life and their experience as a gamer. Professionally, they haven’t felt discriminated against, though it can feel isolating to be one of the only people in the office who was assigned female at birth. But being a gamer is different. “There’s still a lot of sexism, homophobia, transphobia, and racism. If I’m on a game where I can speak, and someone realizes that I’m a girl—or they think I’m a girl—oftentimes I get hit on … or told I don’t belong. There’s not a whole lot in between.”

Baker’s solution? “If you have a kid of any gender and you want to teach them to play games, teach them to be empathetic toward whoever is on the other side of that screen. Then we’ll become a much more welcoming community for everyone.” 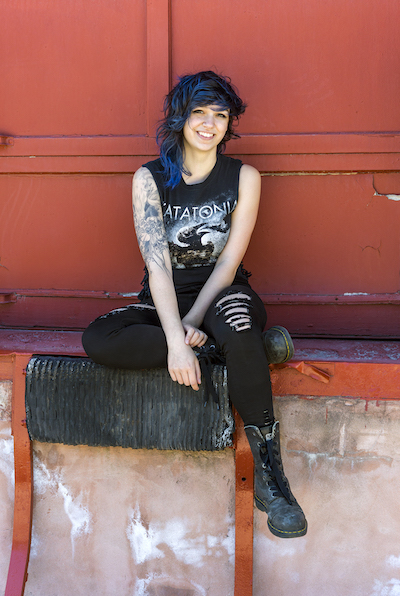 “When I was growing up, I didn’t know any women in any of these fields,” says Ali Cedroni ’16, a junior sound designer for Chicago-based interactive media company Jellyvision. “But for some reason it just didn’t stop me.”

By day, Cedroni edits voice-overs for Jellyvision’s flagship product, Alex, a virtual communication platform that helps companies communicate human resources information like health insurance and financial options. By night, she’s a freelance sound professional for video games, music, and film. She just wrapped editing voice-overs for Trinket Studios’ Battle Chef Brigade by Adult Swim Games. Now she’s creating sound effects for the indie game Codemancer. “It focuses on teaching kids the concepts of coding without dealing with syntax and things like that. It gets them in a problem-solving mind space before they actually learn a language in code,” she says.

Cedroni’s path began in the Audio Arts and Acoustics Department at Columbia, where she discovered the power of being proactive. “Columbia is what you make of it,” says Cedroni. In her mixing classes, she was the one setting mics and using the console. “You don’t get a feeling for working with a client unless you’re up in the front, figuring out what to do and making decisions. I get that it’s terrifying … but [college] is the time to make mistakes. The more ‘up in front’ you can get, the better.”

It wasn’t always easy, especially when she was one of the only women in the room. But Cedroni is optimistic about how to change that. “It starts with having more representation. The more women we have in the space, the less likely someone will be the token girl in an office,” she says. “And the easier it will be for younger generations. They won’t have dudes calling them ‘hon’ in the control room and things like that. I’ve had plenty of those,” she says.

Cedroni interned at two music studios before being hired directly out of college by Jellyvision. “I love that my coworkers come from different creative backgrounds,” she says. “We all understand the struggles that each of us go through. It’s easier to get along with artists when you know how art works. A lot of our technical people have sound degrees, so they know what I’m going through, and vice versa.”

Cedroni serves on the board of the local chapter of International Game Developers Association, which promotes Chicago’s status as a growing tech hub. She urges students and recent grads to network by getting involved in the game development community. “I know college is exhausting, but it never stops being exhausting,” says Cedroni. It’s also important to keep learning: “Right now I’m working on getting my coding back up to par, because it’s been a few years since I’ve used it,” she says. “Audio programming, even as a sound designer, is still good to know—what goes on under the hood, how to fix problems. The best way to market yourself is by saying, ‘I’m interested in learning more things.’” 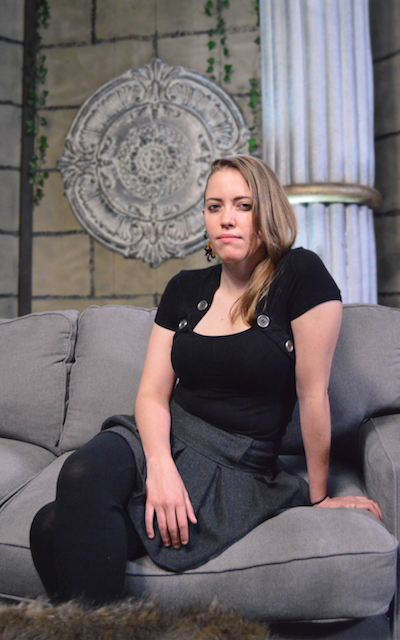 Blair Kuhlman ’13 can tell when a video game is destined to be a hit. “If I don’t hear immense amounts of laughter and yelling coming from the play-test room, that means that we’re doing something wrong,” she says. “The more rambunctious people get, especially when the game is in its early stages and not necessarily the prettiest thing to look at, but the gameplay is still shining through, then you’re definitely on the right track.”

Kuhlman, who works as a user experience/user interface (UX/UI) designer for Hi-Rez Studios in Alpharetta, Georgia, has a passion for games with an independent spirit. “I’ve always been an artist at heart,” she says. She started college at the School of the Art Institute of Chicago, where she took a “really weird VR class that taught me about programming and a little bit about game design.” She “fell in love with that immediately,” she says. “I knew I wanted to switch to a college that really did have a video game career path for me, so I went to Columbia.”

At Hi-Rez, Kuhlman helps create the layout and flow for games like Smite and its offshoot, Hand of the Gods. As she explains, “User interface is pretty much anything you see when you’re playing a game: menus, all the stuff that you go through before you drill into the game, like the front-end stuff. It’s pretty much everything that’s not the game play. User Experience is a little different—it’s from a psychology aspect, dealing with how we present information so it’s easy to understand.” Kuhlman notes that the four-year-old Smite is “ancient” in terms of gaming, so the company releases fresh, engaging limited-time modes of gameplay called “adventures.” Sometimes they’ll deviate drastically from the game’s style. “We had one adventure that turned the game into something like Mario Kart, a completely different genre. Working on stuff like that is really fun because it’s giving me different challenges and new genres to tackle that I haven’t tackled before. It’s a wild ride.”

The ride isn’t without bumps, including gender discrimination. “It’s kind of inevitable that you’re going to find somebody who is casting doubt on whether you should be in the space. This is sad, but I’ve gotten so used to it that it doesn’t even bother me anymore. I mean, I’ve kind of learned to let that stuff slide off of you and keep going,” she says.

From her perspective, the future of gaming looks bright. “I am very optimistic,” she says. “Some games have proven that shooting for more than one demographic is really profitable. Overwatch is a really good example of that. Each one of the characters is unique, and they’re not representing stereotypes. That goes a long way.” She is also enthusiastic about the democratization of technology. “A lot of the tools to make games are now free, so anyone can pretty much pick it up. We’re going to start to hear a lot more voices in the industry.”