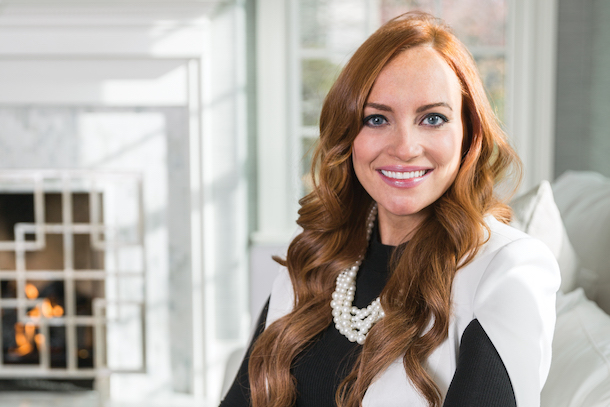 “As an entrepreneur at heart, I’m a believer in creating opportunity.”

“It’s smart to back women,” says Cayla Weisberg ’09, founding partner of Chicago’s InvestHer Ventures. “We’re uniquely positioned to build businesses and scale them faster. But why I do what I do—and why I’m doing it for Columbia as well, is because I believe that there will be a network effect.”

As a longtime entrepreneur, networking is Weisberg’s stock-in-trade. At InvestHer, she promotes female entrepreneurs by funding seed-stage technology startups led by women. And as a newly elected member of Columbia College Chicago’s Board of Trustees, she’s already making an impact by sharing her knowledge with students.

Chicago native Weisberg started her first venture—a concierge shopping company—at age 16. By 19, she grew it into a thriving wholesale fashion business. She chose to attend Columbia in part because it complemented her blossoming career. “I wanted an education that provided me with the autonomy to still run my business,” she says.

At age 24, already armed with years of sales experience in fashion, Weisberg joined a prominent venture capital incubator to lead sales for two venture-backed tech startups. As she navigated the Chicago startup scene, she became acutely aware of its diversity problem. “A glaringly obvious and disheartening reality is that only men—white men, to be frank—were walking through the doors to pitch to the investors,” she says. “It just bothered me. I had a great personal network of female entrepreneurs, but unfortunately, they didn’t have the connections to get in the door, or didn’t even know that it was possible to raise money to fuel their businesses.”

Weisberg knew she wanted to take action. But a plan didn’t take shape until she met her business partner, Gerri Kahnweiler, through a mutual friend. Kahnweiler had decades of experience in philanthropy focused on promoting the potential of women and girls. In 2015, they joined forces and InvestHer was born. It was the first, and remains the only, venture capitalist fund solely dedicated to female-founded tech startups in Chicago.

InvestHer’s portfolio is remarkably diverse, including a number of investments in sectors wherewomen have been traditionally underrepresented. “We have a unique industry base,” Weisberg notes. “We’re pretty agnostic when it comes to the field, but the backbone is technology.”

These include Bridgit, a management solution for construction sites; Knowledgehound, a search engine for market researchers; and Drive My Way, a community marketplace for truck drivers. “Often there’s an assumption that we only back lifestyle businesses,” says Weisberg. “There’s nothing wrong with with a wedding app. But what I think is interesting is how the adoption curves evolve when women are emerging in a space in which they aren't represented.”

Weisberg’s latest venture is Entrepreneurs, Now!, a three-part graduate course she launched with Columbia’s Business and Entrepreneurship Department. The course, taught by Jason Stevens, focuses on the fundamentals of developing a business plan and pitching in front of investors. “My goal is to rally my network of investors and have a Shark Tank-type forum,” Weisberg says.

Columbia’s new trustee knows that a hardworking, innovative startup mindset can benefit creative thinkers of all kinds. “Every student has the opportunity and capacity to think this way,” says Weisberg. “As an entrepreneur at heart, I’m a believer in creating opportunity.”