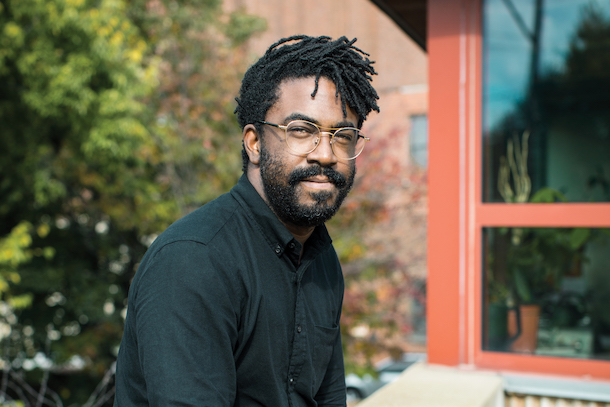 Darryl Holliday ’12 and his colleagues at nonprofit media organization City Bureau are tracking Mayor Rahm Emanuel’s latest legislative proposal. But they’re not running after lawmakers at City Hall with a notebook or a microphone. They’re building a Twitter bot.

“We’re calling it ‘What Rahm Wants,’” Holliday says of the bot, a piece of software that autonomously interacts with Twitter’s platform. “It’s tweeting a thread every time there’s a city council meeting, with all the information about legislation that Rahm’s introduced. That information is public, but it’s hard to find. We’re making it much easier for people to track,” he says.

Holliday has never taken a traditional approach to journalism. While he was a student at Columbia College Chicago, he pioneered “comics journalism,” founding the award-winning collective Illustrated Press with fellow Chronicle rookie Erik Rodriguez. Their work went on to win a Studs Terkel Award from Chicago’s Community Media Workshop.

Today, he’s shaping the future of news in Chicago and beyond. “We’re part news organization, part community group, part media lab,” says Holliday of the three-year-old nonprofit that he co-founded. He explains that without the influence of advertisers and investors, “we’re able to go in directions that others may not.” Their work is bolstered by a recent $1 million grant from the MacArthur Foundation—funds that have already helped them double their staff.

Woodlawn-based City Bureau’s hybrid model boasts considerable output so far. Anchored by a newsroom that is open to the public, it has trained nearly 400 citizens through its Documenters program. “Newsrooms are shrinking. One of the first things to go is coverage of local meetings,” says Holliday. “But those meetings are still very important—decisions are made, and a lot of power is centralized in those governance bodies.” The program trains (and pays) people to turn out at municipal meetings, take notes, and share information with their communities.

City Bureau also offers fellowships to emerging journalists who engage in more conventional reporting—with a twist. In 2016, the organization collaborated with South Side Weekly on a 30-page investigative feature called “Living with Lead.” It was accompanied by an engagement campaign that encouraged readers to text their zip code to access data on lead levels in their neighborhoods. “It ended up sparking a wider discussion around Chicago’s responsibilities when it comes to lead,” Holliday says.

A Queens, New York native with roots in Chicago’s Englewood neighborhood, Holliday was initially attracted to Columbia because it offered artistic freedom. “I loved the idea of doing journalism at an art school,” he says. “I wanted it to be creative, not just about the rote work of filing stories.”

After graduation, he learned the art of hyper-local crime reporting at the now-defunct neighborhood news outlet DNAInfo. He also helped launch the Citizens Police Data Project, a massive database of police complaints, for the Invisible Institute.

A civic-minded, data-driven approach is the common thread between Holliday and his City Bureau co-founders Bettina Chang, Andrea Hart, and Harry Backlund, all of whom have journalism backgrounds. They launched the organization to address a web of interrelated issues, including “a lack of diversity within the news ecosystem, which leads directly to a lack of trust from the public—because they don’t see themselves in the news.”

The model is catching on in other cities as well. Holliday and company are currently collaborating with Detroit Public Radio to create a Documenters program in Motown. Its City Bureau will be its own, however—ready to take on its own set of challenges. “We’re very place-based,” he says. “And yeah, that’s best.”